Estimate the time series like an event was never happened

I have data from a website where a specific advertising campaign happened a couple of years ago. What I want to do is to estimate how the signups on that website would have been without that big campaign.

In specific, I have the signups of every single day for the last 10 years and I have one event that happened 2 years ago. The time series is not linear or doesn't have any fixed seasonality. However, the general trend is going downward. I don't have any control groups. The campaign was applied to everyone at once.

Things I tried to do:

Is there any intervention analysis I could do without control groups, but also taking into account the impact of events after the one we study?

Unfortunately, I cannot add the actual data due to several restrictions. However, this is a dummy sketch that follows the same trend and those small bumps of the small events' impact.

The second peak represents the big campaign. Which is unique compared with the other small peaks. And as you can see, the line towards the end of the graph looks like it reaches a plateau. 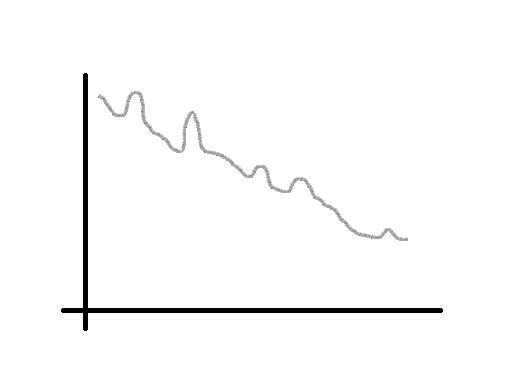 This is an interesting problem, I would begin by developing a model including the determinants of signups. Get a general in-sample relationship between those variables and the dependent variable (sign-ups), then, include a shift parameter (here I would use a dummy variable) for the time during the which the marketing campaign was undertaken (at your discretion, maybe look into the lasting effects of marketing and potentially include lags). Using this you could essentially calculate the expected value given the other determinants at that time and force the dummy variable equal to zero like: $E(Sign\;ups|Marketing\;Campaign=0\;\;\&\;\;Other Variables=x)$ where x would be the value at that time (e.g. if another determinant of sign ups is prices for example, what were the prices at that time [as long as they vary], or other variables). There is simultaneous feedback between number of signups and number of visits so I would be careful using that.

I would suggest looking into what causes signups other than marketing efforts. I don't think this is a sufficient answer and would hope somebody else could shed light on the actual modelling of the relationship.

Without being able to look at your data or set of variables (please include the latter if possible) this is all I can come up with.

Not the answer you're looking for? Browse other questions tagged forecasting intervention-analysis causalimpact prophet or ask your own question.

12
Developing an appropriate time series model to predict sales based on past month record
3
Statistical test: Does actual time series data deviate from forecast?
2
Meta-Analysis on Effect Sizes with 95% Bayesian CI from CausalImpact R package
1
Synthetic Control and Causal Analysis
7
How to calculate causal effects with repeated exogenous shocks over a time series
2
How could I statistically measure the impact of an external event in a time series?
0
Question about Logistic regression vs Cox to predict an incident event with different time of enrollement and of follow-up