Can Moran's I results be compared against each other in different geographies?

I have 50 service areas, each service area has a number of points associated with. In order to compare the areas to each other, one idea was to describe the degree to which its service area's set of points were clustered or dispersed.

Is it possible and is it meaningful to compare the Moran's I of one set of points in a service area to another?

The end goal would be to make a map and rank service areas by levels of clustering/dispersion.

As there is no answer here, and really no reliable answer in the searchable internet, let me provide some information, that would be at least partly useful in this context. 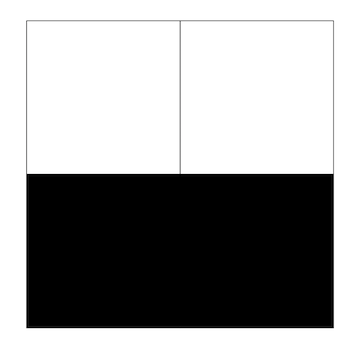 When calculating The Moran's I for this one, using contiguity spatial weights matrix, the value of I is: -0.3333 (equal to expectation).

Then if we divide one of polygons by half this way: 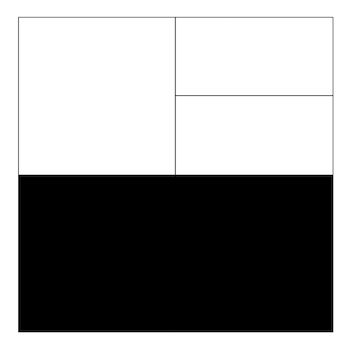 So the values of variable in space did not change, only shape of spatial borders was changed, and this changed value of Moran's I. This property is much more troubling when trying to compare different areas. It might result in strong differences just for shape dependency. But maybe it is not that problematic in some cases, like for example lots of polygons, similar dispersion of them and so on. Unfortunately, I can not provide answer about asymptotic properties, possibly such articles help: On the asymptotic distribution of the Moran I test statistic with applications.

Please consider, that this shape-dependency might look different under different matrices of spatial weights, and comparing across regions might be reasonable for some matrices, while problematic for others.

At this point let me suggest some solutions:

Not the answer you're looking for? Browse other questions tagged autocorrelation spatial gis or ask your own question.

27
2D analog of standard deviation?
5
How to compare sampled areas to the Census?
2
Test for Complete Spatial Randomness taking into account background distribution
1
How to measure the spatial dipresion of multiple clustered data