The Mann-Whitney test ( Rank sum, Wilcoxon-Mann-Whitney ) is according to some authors testing

H0: the populations from which the 2 samples were drawn are identical in every respect

Other times it is described as

H0: one variable is stochastically larger than the other

indeed, that is the essence of the title of the Mann-Whitney paper of 1947 in Annals of Mathematical Statistics. and also on this site Interpretation of Wilcoxon Rank Sum test results

One can perform a quick numerical experiment (R)

Note x2 has 3 times the sd of x1 so the populations are not identical. Yet, the test, if I am interpreting the result correctly, claims no evidence against H0.

If the first view of H0 holds, why doesn't the test reject the hypothesis the populations are identical.

These 2 views of H0 do not seem equivalent. How are they reconciled?

This is a misunderstanding:

In the first link, it is specifically stated "$H_0 :$ The two population distributions are identical" and that point of view is consistently taken throughout.

In the second link, @Glen_b says that the test "considers whether" one variable is stochastically greater than the other. That is never said to be the null hypothesis, and it isn't. It is a statement of the alternative hypothesis. (In my opinion, the main point of that Answer is to explain that the Mann-Whitney-Wilcoxon does not simply test whether medians are equal.)

(1) The two population distributions do not have the same shape (variances differ).

(2) The difference between these two distributions is not their location (both centered at 0).

(4) Data are normal, so tests based on normal theory will be more powerful.

As to (1) and (4): A (normal-theory) F test finds a significant difference in variances.

As to (2) and (4): For normal data with differing means, both a (normal-theory) two-sample t test and a two-sample nonparametric Wilcoxon (signed-rank) test find highly significant differences in location.) For brevity here, I have used $-notation to show only the P-values.) Because the difference in location is substantial, compared with variability, significant differences are found in spite of small sample sizes.

As to (3), sample sizes are too small to detect a smaller difference in centers.

However, for substantially larger sample sizes ($n=50$), the Wilcoxon SR test is able to detect even the small shift.

Notches in the sides of the boxplots below are non-overlapping nonparametric confidence intervals, indicating a shift in location. 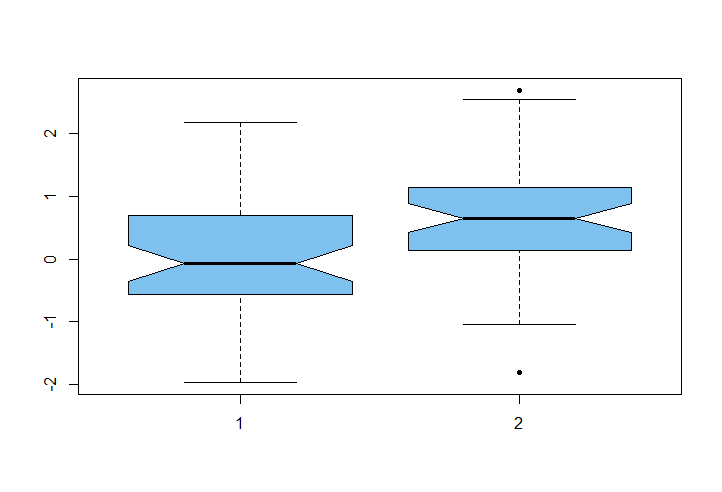 Note: Because data are normal, the last two tests could have been t tests. You can do those if you like. But I omitted them because our main topic here is Wilcoxon SR tests. You might try Wilcoxon tests for (non-normal) uniform data (with a location shift of 0.5):

Addendum per comment: Here is a test for unequal variances between the two small normal samples in your Question. The null hypothesis #H_0: \sigma_1^2 = \sigma_2^2$ is rejected at the 5% level. The Mann-Whitney-Wilcoxon 2-sample nonparametric test does not reject because the difference is in 'shape', not 'location'.

I don't know if this clears it up, but this is how Conover and Wilcox handle the hypotheses for the Mann-Whitney test.

Let F(x) and G(x) be the distribution functions corresponding to X and Y, respectively. Then the hypotheses may be stated as follows. H0: F(x)=G(x) for all x. H1: F(x)≠G(x) for some x.

... In many real situations any difference between distributions implies that P(X>Y) is no longer equal to 1/2. Therefore, H1: P(X>Y) ≠ P (X [less than] Y) is often used instead of the above.

Wilcox, 2017, Modern Statistics for the Social and Behavioral Sciences A Practical Introduction, 2nd

... In a very real sense, a more accurate description of the Wilcoxon-Mann-Whitney test is that it provides a test of the hypothesis that the two distributions are identical. ... When the two distributions are identical, a correct estimate of the standard error [...] is being used. But otherwise, under general conditions, an incorrect estimate is being used, which results in practical concerns, in terms of both Type I errors and power, when using Equation (7.24) to test H0:p=0.5.

Not the answer you're looking for? Browse other questions tagged hypothesis-testing wilcoxon-mann-whitney-test or ask your own question.