I have implemented and been playing around Figueiredo & Jain 's trainer in this paper http://www.lx.it.pt/~mtf/IEEE_TPAMI_2002.pdf for Gaussian mixture. Fig. 2 in the paper depicts the full algorithm. For convenience, I put a screenshot here: 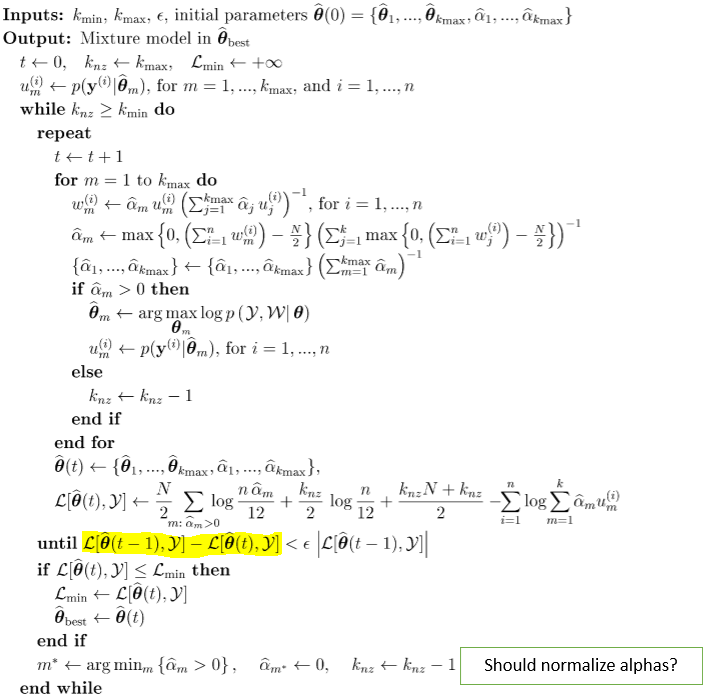 I have two questions about this algorithm.

Update 20190828: I found github user abriosi implemented GMM-MML in Python here: https://github.com/abriosi/gmm-mml/blob/master/gmm_mml/gmm_mml.py. At line 217, he took the absolute difference in loss as the convergence criterion, which seems more appropriate. He also normalized $\{\hat{\alpha}_m\}_{m=1}^{k_{\max}}$ at the green box (line 243 in his code). 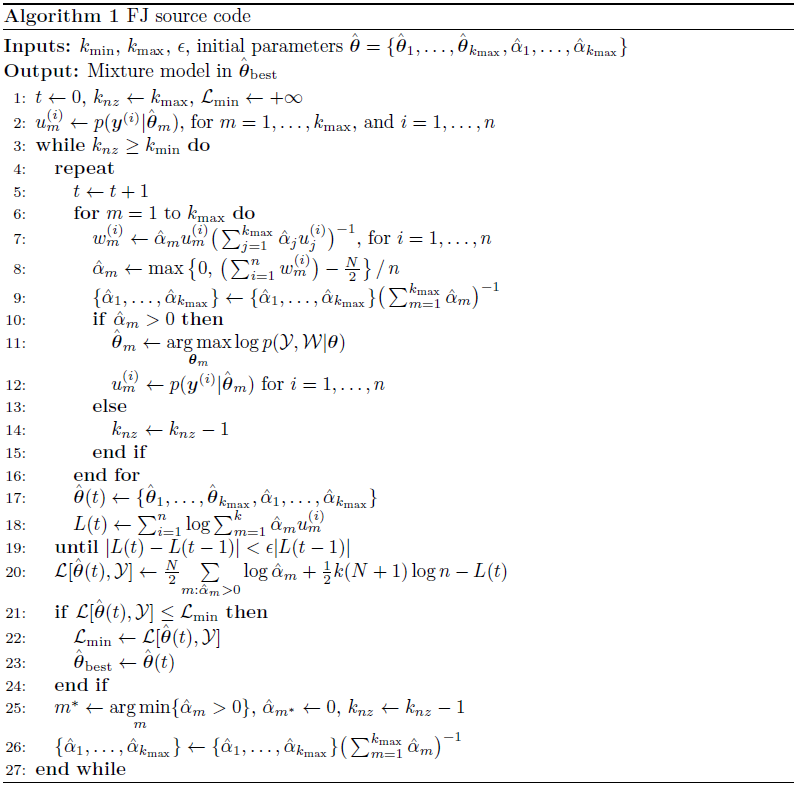 Two major differences. In Line 8, the source code updates the mixture weights differently with much cheaper computational costs. In Line 19, the absolute error between the plain log-likelihoods of the current and the last iteration determines CEM$^2$'s convergence. The paper was using the MML cost function. The MML cost function (Line 20) is also slightly different.

The trainer seems not as good as the paper claimed. For the 4D iris data set, using the paper's random initialization setup, more than 30% of the time it outputs a model having more or fewer than 3 mixture components.

Unsure how much of these changes would contradict the theoretical context embellished by the paper.

I'm the Figueiredo in the Figueiredo & Jain paper. In fact, the pseudo-code in the paper is a slightly unfaithful representation of the actually implemented code, which can be found here (in MATLAB, this was a while ago; but with detailed comments): http://www.lx.it.pt/~mtf/mixturecode2.zip

To answer your questions directly: yes, in the code we do use the absolute value of the difference in the stopping criterion; yes, we do renormalize the alphas after erasing the least probable component.

I hope this answers your questions.

Not the answer you're looking for? Browse other questions tagged bayesian expectation-maximization gaussian-mixture-distribution or ask your own question.