LDA and Fisher LDA - are their weight vectors always equivalent?

LDA assumes that the observations are normally distributed around the classes' expectancies with homoscedastic covariances. The weight vector that projects the observations into unidimensional classification scores is derived from the conditional probabilities of the observations under this model. The Wikipedia page on LDA specifies it as:

FLDA defines a weight vector that projects the multivariate observations to univariate classification scores such that the ratio between between-class variance and the within-class variance is maximal. The same Wikipedia article specifies it as: $$ \vec w \propto (\Sigma_0+\Sigma_1)^{-1}(\vec \mu_1 - \vec \mu_0) $$

Immediately following the specification of the latter formula (the FLDA weight vector), the Wikipedia article states:

"When the assumptions of LDA are satisfied, the above equation is equivalent to LDA. "

However, since $\Sigma=\frac{1}{2}(\Sigma_0+\Sigma_1)$ (pooled covariance is a weighted average of within class covariances), these two weight vectors always point at the same direction, regardless of whether the assumptions (normality, homoscedasticity) hold.

Is the Wikpedia article wrong? Do LDA and FLDA always yield the same solution with respect to the weight vector's direction? Or am I missing some special case?

However, since $\Sigma=\frac{1}{2}(\Sigma_0+\Sigma_1)$ (pooled covariance is a weighted average of within class covariances), these two weight vectors always point at the same direction, regardless of whether the assumptions (normality, homoscedasticity) hold.

This makes sense because the use of the pooled covariance depends on the assumption of equal covariance.

If you assume unequal covariance but remain using the linear classifier LDA, then LDA still coincides with Fisher's LDA (because nothing changes about LDA if the assumptions change). But in that case it is not consistent with the assumptions.

An example why one should not use pooled variance when the assumption of equal covariance does not hold is when you have two groups with different covariance and where one group dominates because there are more samples. In that case the pooled variance is dominated by this one group and this might lead to a less optimal linear discriminating function.

Below is a graphical example for such case. 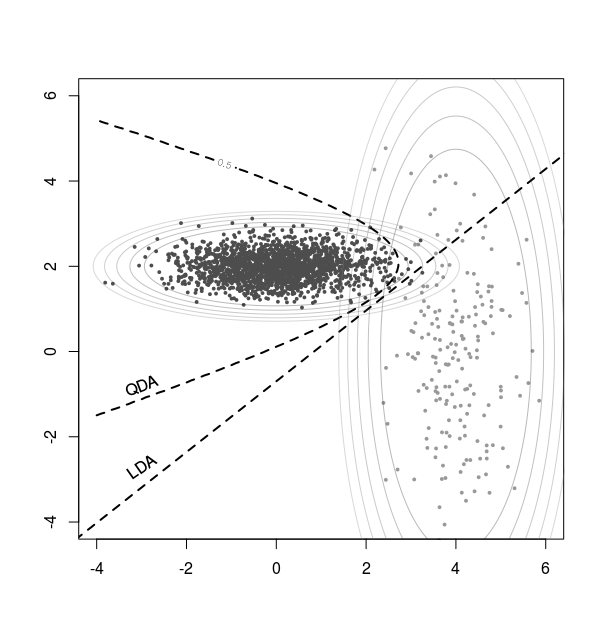 Not the answer you're looking for? Browse other questions tagged classification normal-distribution discriminant-analysis bayes-optimal-classifier or ask your own question.