This post gives this formula to compute the empirical distribution:

I am trying to compute this with a concrete example:

x stores a list of 12 variables that generated from a normal distribution.

The formula you quoted is empirical generalized PDF, and the R function ecdf gives you the generalized integral of it, which is the empirical CDF (i.e. cumulative distribution function). Specifically, ecdf returns a function object that you can call, e.g. a usage may be as follows:

As the explanation notes, empirical CDF is just a step function simply calculates the following probability for any given $x$: $$\hat{F_X}(x)=\frac{\text{Number of data points that is } \leq x}{m}$$

Although that post didn't say so, it was using "$\delta$" in the sense of an abstract mathematical object that one can integrate. Its rules are especially simple: for any function $f,$ the integral of "$\delta(x)f(x)\mathrm{d}x$" over any set $\mathcal R$ equals $f(0)$ if $0\in \mathcal R$ and otherwise the integral is zero.

This obviously is not a Riemann integral, nor is it a Lebesgue integral: it is a "generalized function" that extends the operation of integration. The concept it is generalizing is that of the integral-as-functional. That is, the rule that associates with any function $f$ its integral over a fixed region $\mathcal R$ is a "function of a function"--a functional--that enjoys some nice properties. In particular, integration is linear: the integral of a linear combination of functions is the same linear combination of their integrals. $\delta$ is one of the simplest examples of a linear functional that cannot be expressed as a (Riemann or Lebesgue) integral.

This permits us to abuse notation by defining

because it enables us (somewhat mindlessly) to apply the substitution $y=x-a$ in the integral, giving

as intended. In particular, letting $f(x)=1$ be the constant function, we have

By definition, the value of the CDF $F(t)$ of any distribution $\hat p$ is obtained by integrating that distribution up to the number $t,$ which we can perform by using the linearity property:

The integrals in the sum are immediately obtained from the basic relation $(*)$ above: they are zero except for the $i$ with $x^{(i)}\in (-\infty, t],$ where they equal $1.$ The result can be written

The graph of $F$ therefore consists of horizontal segments that jump by some multiple of $1/m$ at each data value $x^{(i)}.$ The multiple is given by the number of times $x^{(i)}$ appears in the dataset. See the figure below for an example.

Given an ascending sequence of arguments $t,$ start with a binary search and then search forward through the list with each successive value. For very large sequences of length $N \gg n,$ this takes $O(\log(n)+N)$ time.

To plot the graph of $F,$ draw a horizontal half-open line segment from $z_i$ to $z_{i+1}$ at height $n_i/n$ for all but the last index $i.$ Each segment includes its left endpoint but not its right endpoint. This takes at most $O(n)$ time (even accounting for the clipping to the plotting window).

In R, the output of ecdf is an object consisting of this list (or its logical equivalent). What is reported in the question is merely R's way of printing this object. It's not terribly useful. The help for ecdf says you can find the data for this object in its environment. For instance,

stores this object in obj which you can inspect via

By comparing this to the abstract data structure $(**)$ it should now be obvious, even to those who do not use R, what most of these values represent. (f and method are used by the parent class for approximating functions in more flexible ways.)

The clearest way to inspect an ecdf object is to plot it: 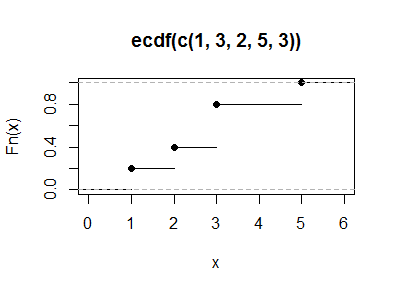 Not the answer you're looking for? Browse other questions tagged r empirical-cdf or ask your own question.

4
How can one use the predict function on a lm object where the IVs have been dynamically scaled?
17
Model building and selection using Hosmer et al. 2013. Applied Logistic Regression in R
3
Confidence interval for samples from an empirical distribution
2
Sample size determination using historical data and simulation