How many trials are needed to get a statistically important proportion of 0.003 for a binomial variable?

Please ignore the following inputs which was considered as unclear, I edited my question above.

then the sample size is about 54748 for each group of control and treatment. However, my question is if the two proportions in control and treatment groups are equal. In such a case, what is the minimal sample size for testing the equal proportions? For example, instead of doing 26,667 trial with 80 success results, I can do 2667 with 8 success results, then for both cases the successful rates are 0.003. So I just need 2,667 trials rather than 26,667 to get the result. How do I determine the sample size 2,667 versus 26,667 for testing the equal proportions statistically? or my question does not make sense at all? Basically, I just asked the opposite question compared with ordinary question (i.e., given two equal proportions rather than different proportions, how to determine the minimal sample size by fixing power and significant level).

Thank you for giving useful suggestions in the reply.

To clear the question, I can ask like this. If I want to get the successful rate is 0.003, how many trials (each trial has one of success or failure results) are needed, making such a proportion (0.003) is statistically important? In theory, I can do 100 trials, 1000 trials, even more trials like 10,000 trials (however, from the practical perspective, I should use the minimal trials because it saves money and time, but result is still statistically important). So the question is what is the minimal trials are needed to get the statistically important successful rate of 0.003. Here I used the power of 0.8, and significant level of 0.05. Please help. Correct me if my question makes no sense. Thanks.

if in the control and treatment groups, the proportions of success are both 0.003, then what is the minimal sample size for statistical testing of the two equal proportions

In order to determine what size of sample is neccesary to take, you could express something like the probability to observe a significant difference, given a true difference (of some specific effect size), as function of the sample sizes. So to compute the sample size you need 1) an idea of a relevant minimal difference/effect 2) a level of desired power/probability.

It is important to specify this minimal difference, since in practice the null hypothesis is almost never true. Some way or another the different treatment might have a tiny miniscule effect (not of the kind of size that was theoretically expected) and given a large enough sample you might show that the two groups are different by a tiny minuscule amount.

Two ways to deal with this type of problem are two one-sided t-tests (TOST) and likelihood ratio test. In both cases you explicitly specify both the hypotheses (null/alternative).

To the point: To do the computations of sample size you can approximate the variables as normal distributed. In a simple way you use the 0.003 as an initial value by which you can compute the variance, but a more difficult case is when the proportions turn out to be smaller than initially expected (which reduces the number of successes and you actually wish to have a certain number of successes rather than a certain number of total sample).

@MartijnWitherings (+1) has given a nice orientation and introduction to this topic. For reference, here are a couple of specific power computations.

Testing at the 5% level, suppose you want to know sample sizes for two groups that will give a probability (power) .90 [or .95] of detecting a true difference in proportions of 0.003 and 0.01. Then Minitab's power and sample size procedure says you should use about 2768 [or 3423] subjects in each group. 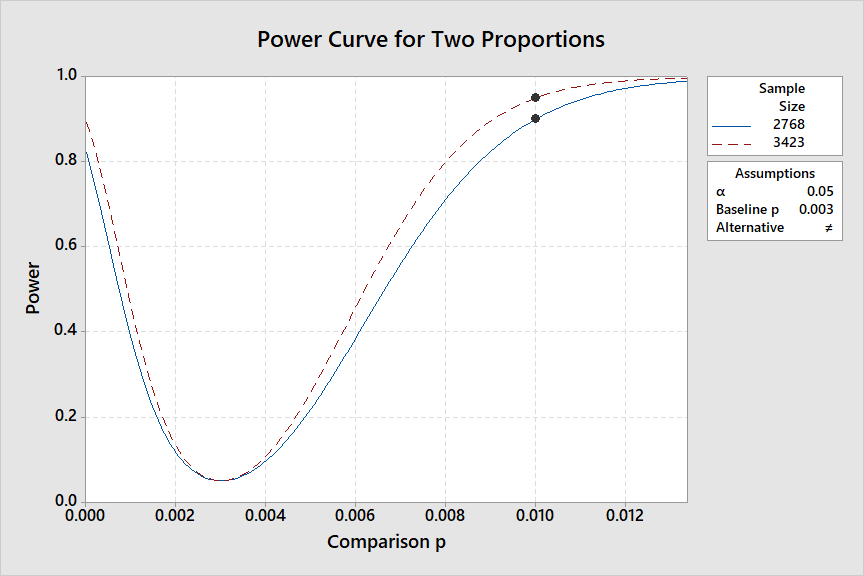 From the following, you can see that much larger sample sizes are necessary to detect a difference between 0.003 and 0.005. In planning sample size for an experiment, it is important to know the size of the difference that is of practical importance or scientific interest. 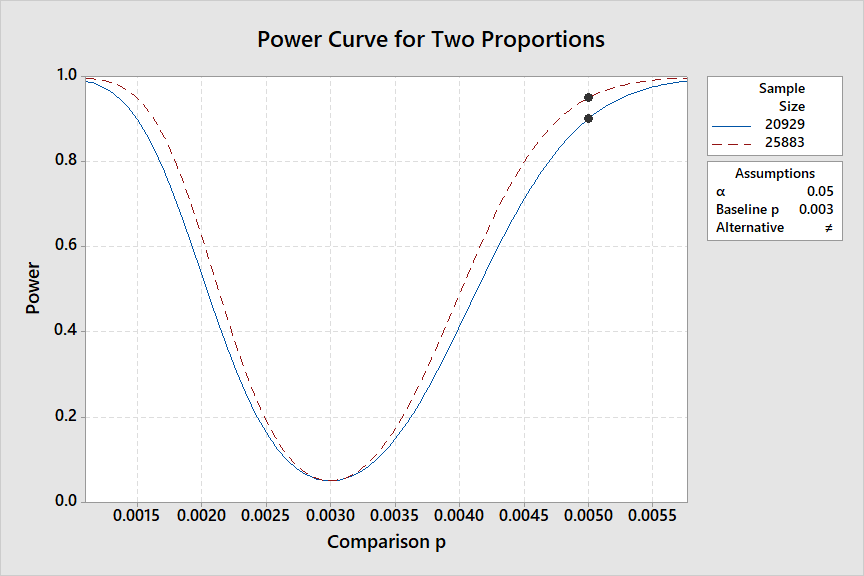 Not the answer you're looking for? Browse other questions tagged r hypothesis-testing statistical-significance binomial-distribution proportion or ask your own question.

3
Testing for differences in very small proportions
10
R - power.prop.test, prop.test, and unequal sample sizes in A/B tests
64
Test if two binomial distributions are statistically different from each other
3
Statistical comparison between binomial distributions, two groups and many trials
5
Why does my power vary markedly between a z-test (2 proportions) and a chi-squared test?
4
Unknown process outputs binary results, how to prove that this process is (or not) a Bernoulli trial
3
Test for Proportion Difference vs. Test for Odds Ratios
1
Required sample size to reach adequate power of a test
3
Sample proportion vs mean proportion for sample size estimation