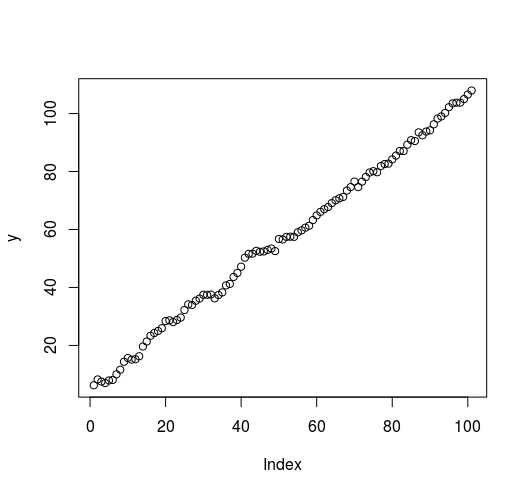 The above is a plot of the same. Now to test the stationarity of this series I used the adf.test function from the package tseries in R. For the above model a Dickey Fuller Test (i.e adf test with 0 lag) should be enough (and appropriate too) to test for stationarity. However the output of the following code :

If run your code many times and check how often you get a pvalue less than 5%:

You see that the adf test does its job, it only incorrectly rejects the null of not stationary about 5% of the time.

The data you posted is obviously non-stationary because it seems to have a linear trend - but the ADF implemented in adf.test uses a model that allows for a constant and a linear trend term. So if these are taken out, it can happen that the data then looks stationary.

Not the answer you're looking for? Browse other questions tagged time-series hypothesis-testing stationarity unit-root augmented-dickey-fuller or ask your own question.

8
Explosive processes, non-stationarity and unit roots, how to distinguish?
1
Time Series: Does stationarity imply mean reversion?
1
P-value of Augmented Dickey-Fuller test and KPSS test
5
Why is this time-series stationary?
2
Interpretation of ADF(Augmented Dickey-Fuller) and KPSS (Kwiatkowski–Phillips–Schmidt–Shin) tests for time series
2
ADF test in R using adf.test vs ur.df
2
Check for stationarity of a time series and check Granger causality test
2
Why does an (Augmented) Dickey Fuller test apply in an ARMA situation when it (seems to) assume an $AR(p)$ situation?