How to compute confidence interval in a case with small sample size, small population size, and one very dominant class?

I have a situation that is analogous to someone starting with a bag of 150 red and blue marbles, and, sampling randomly without replacement, drawing 37 red marbles and 3 blue marbles. What is a formula that would give confidence intervals for the true proportions that are both realistic and not overly large? How could I derive it? Ideally, it should give a confidence interval of non-zero radius even if we were to draw 40 red marbles out of 40.

Judging from its abstract, the JASA article by Weizhen Wang linked in my comment, gives a method to get (nearly) exact hypergeometric confidence confidence intervals. Perhaps a more easily computed style of CI, based on a normal approximation to the hypergeometric distribution, will suffice for your purposes.

A Wald-style asymptotic CI would use $p = x/n$ to estimate the proportion of red marbles, thus estimating that the number of red balls in the urn is $R = pT$ (rounded to an integer). Such an interval would degenerate to a point estimate for $x = 0$ of $x = n,$ which you say you want to avoid. [Note: Our goal is to estimate the integer parameter $R.$ So a 'point' CI is not necessarily absurd.]

For binomial CIs, the Agresti-Coull style of interval 'shrinks' the point estimate of the binomial success probability $\theta$ towards $1/2$ to provide an interval that does not degenerate to points for extreme observations and has more accurate coverage probability than Wald CIs. They use $\hat \theta = \frac{x+2}{n+4},$ but arguments can be made that $\hat \theta = \frac{x+1}{n+2}$ might also be used. Accordingly, I suggest the estimate $p = \frac{x+1}{n+2}$ as an estimate for hypergeometric $p$ in your problem. 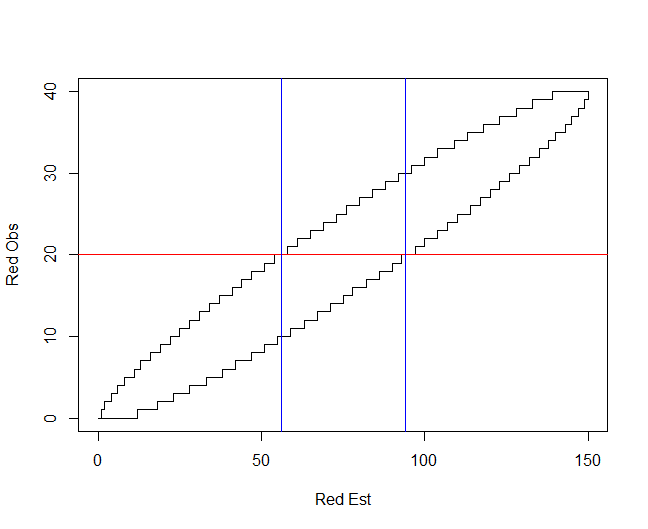 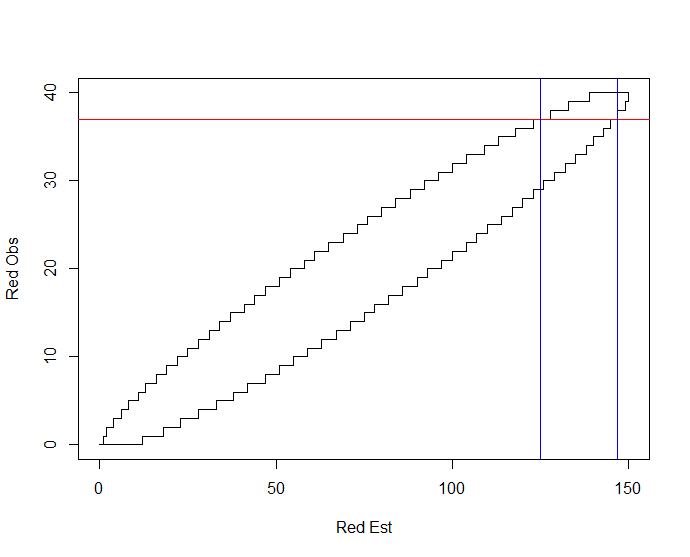 Furthermore, agreement for the extreme cases $(x = 0$ or $x = n)$ is not perfect, but also pretty good. (Even for large $T,$ the normal approximation is less accurate for $R$ near $0$ or $T.$ Maybe you can check the extreme cases for yourself from a printout of the figure.)

Unresolved. An unresolved issue with the general method in this case is that it is not possible in general to get 95% CIs by 'cutting exactly 2.5% from each tail of the distribution' because the hypergeometric distribution is discrete. The usual approach is to start by getting 'optimal' one-sided CIs, and from them to get two-sided CIs with approximately 95% coverage--as near as possible to 95% without going below. (To use a normal approximation is essentially to ignore the discreteness issue, not to resolve it.)

I do not see how to make sense of getting CIs for the number of red marbles without knowing the total number of marbles. If $n < 0.1T,$ it might be argued that binomial CIs should be used to give proportions of red marbles.

Not the answer you're looking for? Browse other questions tagged confidence-interval hypergeometric or ask your own question.