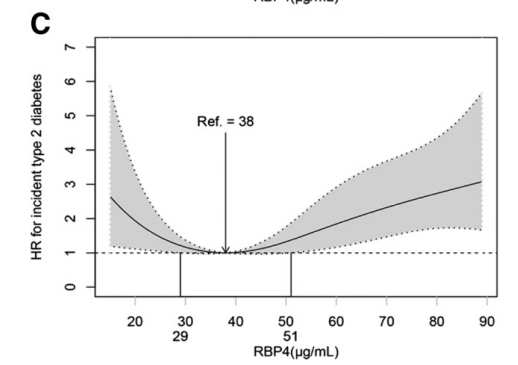 The authors state this about the figure: "Multivariate Cox regression models witha cubic natural spline analysis were used to determine the potential nonlinear association between RBP4 levels (continuous) and the risk of incident type 2 diabetes."

I am sure this was obtained from the rms package. However, can anyone give me a run-down of where the "cubic natural splines" play into this? Additionally, does this mean proportional hazards was violated given what we see is "U-shaped"?

Thank you for any sight. I am grateful for the survival analysis community that has helped me in the past.

To answer your last question first (see detail later): the proportional hazards assumption (PH assumption) is about whether the impact of a particular risk factor might be constant over time, irrespective of the functional form of that risk factor (categorical, linear, splined function)

Natural cubic splines (more commonly called restricted cubic splines in my experience in biostatistics - this is also the terminology used in the rms package and might help you find other relevant material) are instead about how the hazard function for the outcome (incident case of Type 2 diabetes) differs across another continuous dimension, in your case the range of RBP4 values (ranging from around 20 to 90-ish).

The spline function effectively allows for a non-linear relationship between the risk factor and the outcome (the u-shaped curve). You can see from the figure that those with levels of RBP4 either below or above the reference level of 38 units have an elevated hazard ratio relative to the reference.

But this is about the risk factor -> outcome relationship, rather than the PH assumption. The splined function is still assumed to meet the proportional hazards assumption. It is modelled as a constant effect over time -- that is, low and high RBP4 values are associated with a higher instantaneous risk of incident diabetes, but this relative difference in hazards has been modelled as constant across the follow-up period (which is the proportional hazards assumption).

As a final note: Assessing the proportional hazards assumption is relatively simple for a categorical predictor variable (e.g. using log-log Survival curves, usually presented as stratified curves for a categorical factor). This process is considerably more complex for a continuous covariate (whether modelled with splines or with a linear function), and would really warrant its own question (if you're interested, and which I'd leave for someone else to answer!)

Not the answer you're looking for? Browse other questions tagged multivariate-analysis survival cox-model splines or ask your own question.