I am interested in the legitimacy and classification of the following approach to sample size determination. This question is inspired by “There is only one test!” by Allen Downey and “Statistics without the agonizing pain” by John Rauser.

Suppose there is a customer base, and each customer is described by some characteristic $x$, such as the total amount of spendings. Let $f$ be an arbitrary metric that we care about, such as the average value. Let also $T$ be a treatment that is hypothesized to improve the business as measured by $f$. We are then to run the following NHST:

$H_1$: $T$ positively affects the population as measured by $f$.

Given an $\alpha$ and a minimum detectable effect size $\delta$, the goal is to determine the minimum sample size $n$ required to attain a prescribed $\beta$. At our disposal, we have a dataset $X = \{x_i\}$ describing the customer base during a time interval in the recent past. We resort to simulation as follows.

Placing the above procedure in an optimization loop, we obtain the minimum $n$ required to attain the desired $\beta$. The following R snippet demonstrates the approach: 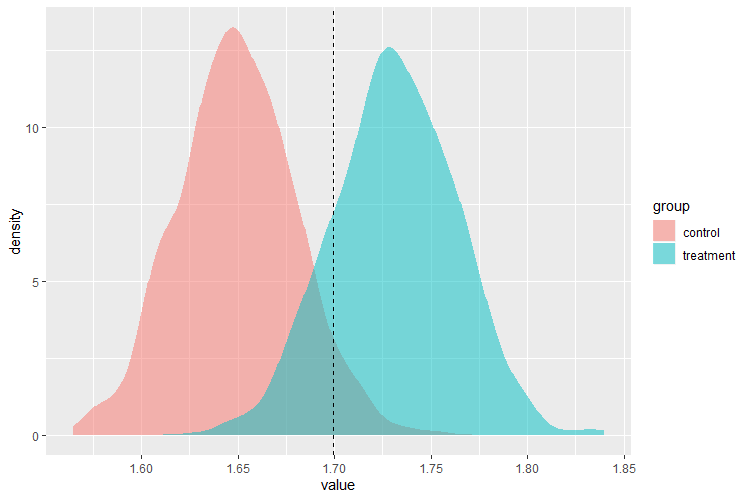 Is it a statistically sound procedure? How would you classify it? Does it have a name? Is it a variant of bootstrap? How does it compare with the classical t-test?

The last is particularly concerning, as it gives a totally different estimate:

You're doing what's called a "bootstrap" power calculation. It's a perfectly reasonable method. Though not as common as methods that make assumptions about the distribution of the test statistic, it is valid, and likely to be more appropriate in cases where the necessary assumptions are not true enough. That is, the assumptions are almost never exactly true, but usually they're plenty good enough.

I didn't find any references about this straightforward situation in a quick search of the literature, but here's a blog post from statistics you can probably trust that refers to Common Errors in Statistics (and How to Avoid Them) by Phillip Good and James Hardin, which I've not personally read but have heard good things about, and both authors are respected statisticians.

Anyway, the problem with your code is that it's doing a one-sample t-test, not a two-sample t-test. power.t.test for the one-sided situation gives about 631, close to your 634. Try comparing with this.

Here's a stab at what equivalent code for a two-sample test would look like; I get 1306, close to the expected 1261.

PS. The Downey blog is misleading about the current state of statistical education; teaching via simulation and bootstrap is now very common, and many consider it best practices. For an example see one of the OpenIntro statistics textbooks: https://www.openintro.org/stat/textbook.php?stat_book=isrs

What you have coded is essentially a bootstrap test, as it is sampling from existing data with replacement.

Try repeating your code but with your initial sample from rnorm instead of rlnorm. You should find the results are approximately the same.

In real life as well, it would be fairly unusual to have an additive treatment effect on lognormally distributed data (multiplicative would be much more common)

Not the answer you're looking for? Browse other questions tagged r hypothesis-testing bootstrap sample-size simulation or ask your own question.

3
Linear regression sample size advice
4
calculating necessary sample size
2
Why is the sample size calculation not in agreement with t-test results?
1
Test vs control group - how to increase the accuracy of my estimate?
0
Calculating the optimal sample size before running a test
2
Sample Size Calculation - Two Independent Means
0
Does Differences-in-Differences linear regression 'forget' the pairing between before and after data points?