In a testing, ranking, or selection scenario, we have samples of size n where a measurement is correlated 0<r<1 with some second variable of interest; they are bivariate normally distributed. We'd like to select the maximum. If we pick the maximum on the first variable, we have a better chance of picking the maximum on the second variable as well, but of course, with less than 100% probability. What exactly is the probability of selecting the true maximum for a given n and r?

This can be easily simulated (R):

But I have failed to figure out any way to calculate it exactly.

I spent a few hours trying to read through the order statistics literature, without little success (most of the discussions of bivariate or multivariate order statistics don't seem to be considering a scenario like this, or I completely failed to understand them) and also following one idea I had: given the expectation on the first variable (the expected maximum of n), the expected second variable is regressed to the mean by r, eg

The winner on the test is +1.53SD, but regress to the mean down to +0.76SD on the true latent variable. For it to be the maximum on the second variable as well, that is another way of saying that all the other 9 datapoints in the sample must all be smaller than it. Each datapoint has a certain p of being greater than +0.76SD, so the probability of p failing 9 times is then simply $(1-p)^9$. So to estimate the repeat probability, you'd simply take the expected maximum of n, deflate by r, calculate the CDF for that, and raise it to n-1. p is easily estimated by simulation or exactly for the normal distribution:

Except... $0.779^9=0.10$, which is way off from 0.29, and this is true of all the other values I've tried. I wondered if I was specifying the SDs wrong for the second variable, but looking at the simulation, it is indeed $N(0,1)$ as it should be, the maximum on variable 1 does indeed regress by r in variable 2, and I can't find any formula which gives max-probabilities consistent with the simulation estimates even fiddling around with the SDs.

So what am I doing wrong here and what is the right answer? And are there any generalizations discussing how much slippage there is for given n and r?

There is an analytic answer for a slightly different distribution, the Ali-Mikhail-Haq copula.

Then we can calculate the probability of $X$ and $Y$ being maximized at the same observation:

The following plot of pdfs shows the closeness of this approximation: the orange is the AMH copula with $\theta=1$, and the blue is the standard bivariate normal with $r=\frac{1}{2}$. 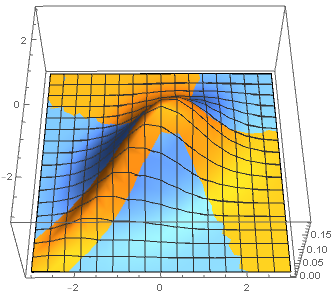 So the overall probability that the maximal $X$ and maximal $Y$ occur at the same observation is $\int_0^1 nx^{n-1}q(x)dx$, which gives the expression for $p(n,\theta)$ at the beginning.

Not the answer you're looking for? Browse other questions tagged hypothesis-testing ranking order-statistics or ask your own question.