I have two dice, each with four faces.

Is there any other test, which is better than this test? How to find type 1 and type 2 error? Instead of 100, if we increase number of throws we can bound both type 1 & type 2 error. How many throws are required so that both errors are less than 0.01?

Following @whuber's Comment: With the fair die, the distribution of the chi-squared statistic is approximately $\mathsf{Chisq}(\nu = 3).$ [Blue in figure.]

With the unfair die the chi-squared statistic is approximately noncentral chi-squared with $\nu = 3$ and noncentrality parameter as shown in the last section here. [Red in figure.]

For 100 rolls, the two distributions are sufficiently different to provide a good chance of accurate discrimination.

As whuber, Peter Flom and I all said (in different ways) in comments, a choice between two such options in the hypothesized circumstance isn't a standard hypothesis testing situation and that's not the best way to choose between them (though we can make use of the statistic -- see the note at the end).

The thing whuber was actually referring to (and which I alluded to previously as being an excellent way to decide between them) is as follows:

Let's look at its performance by sampling in exactly the fashion described in the question (choose a die at random, roll it 100 times) and then compute this log of the likelihood ratio criterion on the outcome; we can repeat that 1000 times. 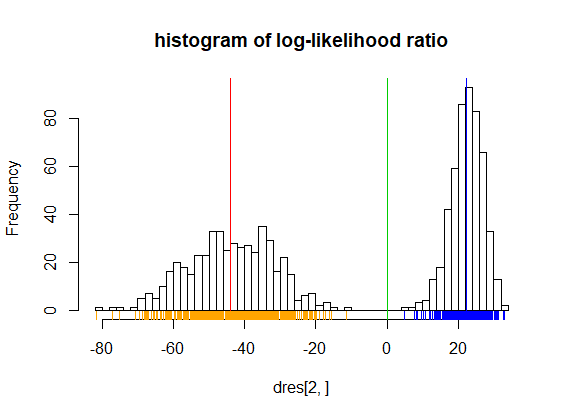 As we see in the output there are two clusters of results, the orange ones in the left cluster, which are all the times a fair die was selected to generate the data, and the blue ones in the right cluster, which are all the times an unfair die was selected. At n=100, we don't see a single misclassified case. Indeed, if we do a million trials instead of 1000, we get only 33 misclassified cases:

Can we do something similar using a chi-square statistic?

Well, indeed, if we compute chi-squared statistics for each die (as if it were the null) and assign the outcome to the die which has the lower chi-squared statistic, we get quite good performance, though the misclassification rate is several times higher. On the other hand, we can improve it by moving the threshold a little (choosing the fair die only when the difference in the two chi-squareds $\chi^2_u-\chi^2_f$ is somewhat more negative).

As the sample size increases from 100, the performance of the two approaches (difference of log-likelihoods vs difference of chi-squared statistics) should become more and more similar.

Since someone nearly always asks, here's the R code I used to generate the histogram/rugplot above. I have not tried to make it pretty, nor understandable, it's simply what I used.

4
how to simulate type I error and type II error
5
How to reduce type I and II error for determining bias of loaded dice for reduced legal costs?
2
Testing the equality of two multivariate mean vectors $μ_1$ and $μ_2$ based on independent random normal samples
0
How to Properly Interpret the Hypotheses/Results of a Permutation Test Based on the Test Statistic?
8
Is there a test that uses $|{\mu_A}-{\mu_B}|\le \delta $ as the null hypothesis?