What statistical test should I perform for the data who comes from more than one population? [closed]

I want to check the chosen property (for example volume, density etc.) between data of experiment 1 and experiment 2, whether the difference of property between the experiment is significant or not?

My data in each sample comes from spatial region and have following sizes:

What method will be good to perform statistical test.

(1) Merging all the samples of experiment 1 and experiment 2 and then perform the statistics.

(2) Merging all the samples of experiment 1 and experiment 2, plotting their histogram and perform the test on histogram value.

(3) Making similar bin (binsize 10) for each sample, take averages over bin for the samples in each experiment and then perform the statistical test.

I tried Kolmogorov-Smirnov for method 1; Spearman's rank correlation coefficient and Chi-square test for method 2 and 3 but none of p-values looks promising. I suspect that data in each samples comes from more than one population (meaning spatially different population) and these population may not be normally distributed.

What will you suggest: (i) what is the good way to arrange the data; and (2) which statistical should be done for such data?

Two-sample nonparametric Wilcoxon test. The two-sample Wilcoxon rank sum test looks only at ranks (relative positions). It is true that all of the outcomes in one experiment are substantially greater than any of the outcomes in the other. However, there are only ${7 \choose 4}$ possible ways for the $3 + 4 = 7$ outcomes to be allocated to two groups, and two of those show complete separation. And $2/35 \approx 0.057 > 0.05.$

Using data as shown below, here are results from 2-sample Wilcoxon tests as implemented in R. First, the two-sided test that the two groups are have different locations; second, the one-sided test that group 2 has smaller values than group 2.

Welch two-sample t test. If you are willing to assume that your data are nearly normal, then you could use a t test. It is not feasible to test such small samples for normality, so the judgment whether to use a t test would have to be judged primarily on the basis of previous experience with such data. Results of both two-sided and one-sided tests give highly significant results with P-values much smaller than 0.05. [Welch two-sample t tests do not assume that the population variances are the same.]

If your data are numeric in the sense that sample means are valid measures of centrality, then you could use a permutation test. This type of test takes numerical values into account, but does not require normal data.

At each step the data are scrambled between two 'groups' and the difference in means is found. The P-value of the two-sided test is about $0.03 < 0.05.$

A histogram of the simulated permutation distribution is shown below. The P-value is the probability below the vertical red line. 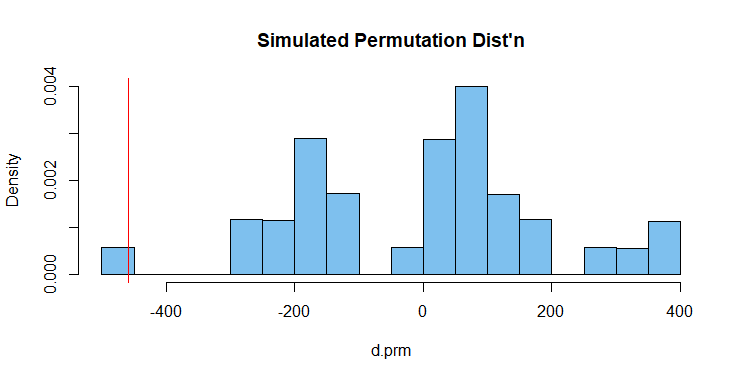 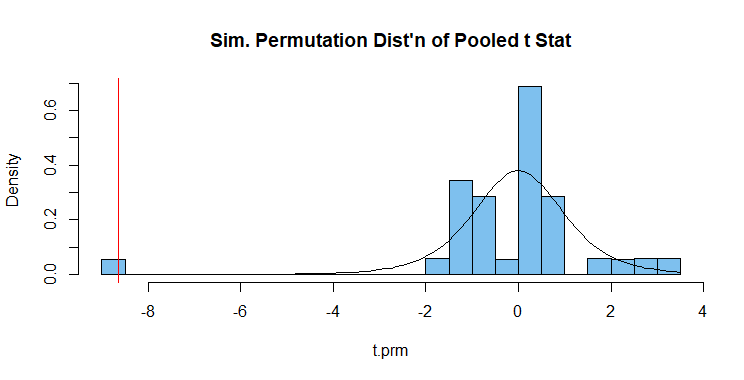 Not the answer you're looking for? Browse other questions tagged hypothesis-testing wilcoxon-mann-whitney-test kolmogorov-smirnov-test or ask your own question.

0
What is exactly the non-normality requisite for nonparametric tests?

23
How to test for differences between two group means when the data is not normally distributed?
13
Statistical test for a value being significantly further from the population mean: is it a Z-test or a T-test?
6
Alternative to Kolmogorov-Smirnov test when parameters are estimated from the data
3
When should I use one-sample t-test and when should I use t-test for two population means?
0
What statistical test should I use? - Limited information
0
Testing that training and test data sets (not vectors) have been drawn from the same population in R
0
two-sample Kolmogorov-Smirnov test suggest that sample with the same data generating process from different populations