So Model A appears to be the better model - However it makes more theoretical sense to include the Mediator (M3) from Model B. Moreover, indirect effects of the predictors through this mediator are significant.

Model Fit from both models is also good, but slightly better for Model A.

I'm hoping someone might be able to provide some advice around how to interpret these findings? How is it that the indirect effects of the predictor through the new mediator is significant, but the variance doesn't change? 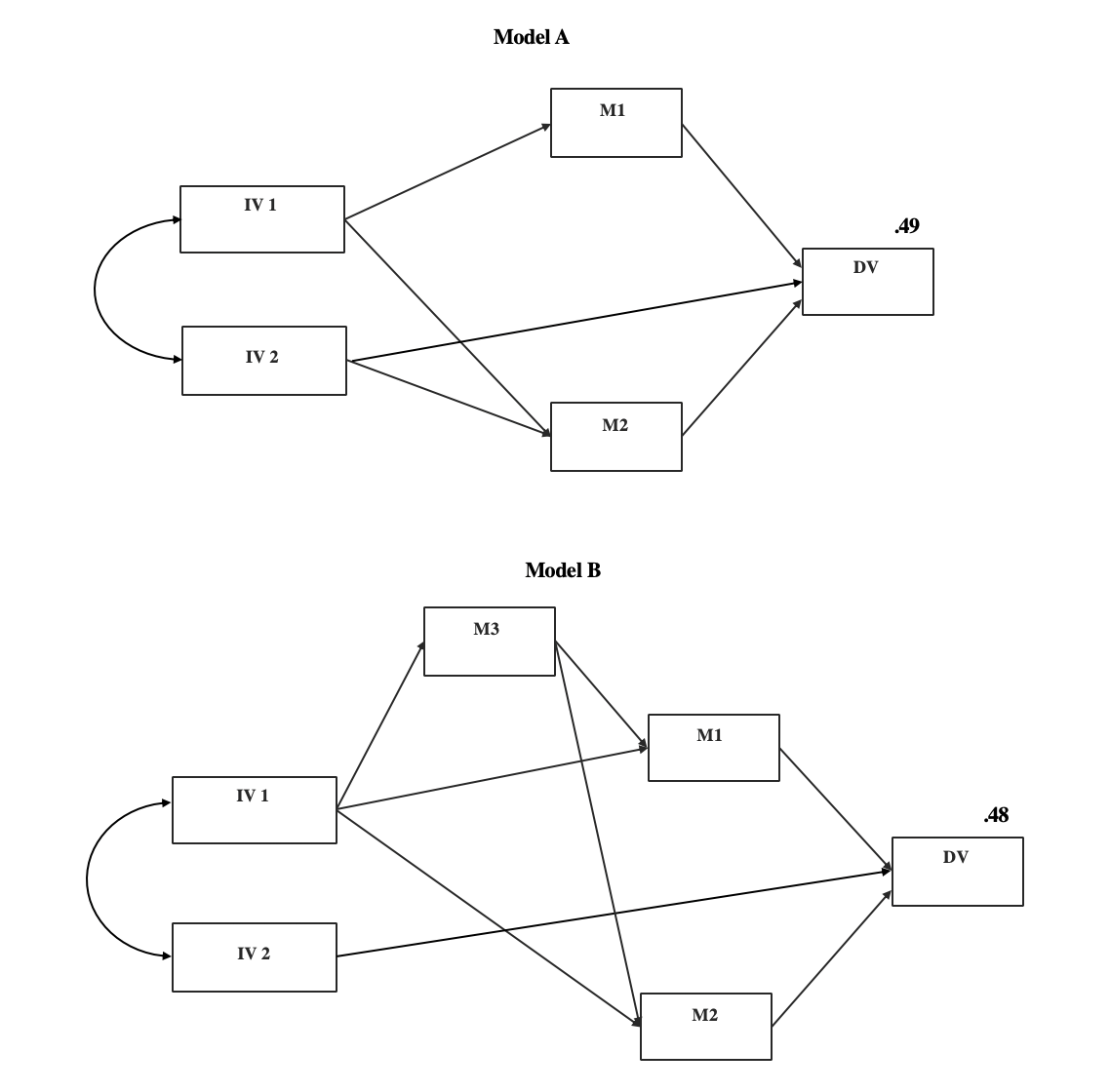 First, one wouldn't necessarily expect the R2 of DV to change much with the addition of the mediator. The same predictors are predicting the DV with and without the mediator. In addition, it's quite possible the difference in R2 you observed is due simply to chance and so should not be interpreted as evidence in favor of one model.

Second, comparing R2s is not the best way to evaluate the fit of a multivariate model like this one. You are testing a broad theory that includes many explanatory components, not just trying to explain variability in the outcome. Model fit statistics for SEM like CFI, RMSEA, and BIC are preferable because they assess the fit of the whole model taken at once, not just the fit of one component model for one outcome.

Third, if you leave the path from IV2 to M2 in the model, the two models are nested and you can perform a likelihood ratio test to directly compare the two models. If the test is significant, then at least one of the added paths pointing to or from M3 is significantly different from zero. You can follow up by looking at the significance of individual paths. You cannot perform this test if the path from IV2 to M2 is removed, as doing so will make the models non-nested. Note that this does not test for mediation; it merely tests whether the covariance among the observed covariates is better explained by a model with M3 than a model without. It could be that just the M3 to M1 path is nonzero, which would not correspond to mediation, but this would correspond to a rejection of the null hypothesis of the likelihood ratio test. This is a test if any of the added paths are different from zero. If they are all equal to zero, then model A is equivalent to model B.

Finally, don't remove paths just because they are nonsignificant. Doing so can inappropriately change your model. Just estimate the path and report it as nonsignificant. Nonsignificant doesn't mean it's equal to zero and should be constrained as such; it just means you didn't have evidence to claim it's different from zero. There are variable selection techniques to determine which paths should be estimated and which can be constrained to be zero, but these techniques are purely exploratory and should not be used in a confirmatory fashion, as you are attempting to do when testing a specific theory.

Not the answer you're looking for? Browse other questions tagged sem controlling-for-a-variable amos or ask your own question.