WARNING : MAJOR UPDATE BELOW, I've made a mistake

I am currently working on validating a predictive model that was made some years ago. In doing so, I am comparing the distribution of the Target variable vs Model variables from the old database vs new data.

I did some ploting and also performed a two sample KS-test and I cannot understand the results obtained. 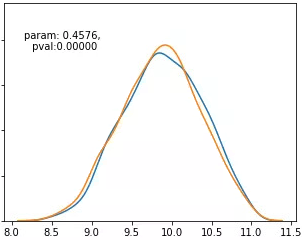 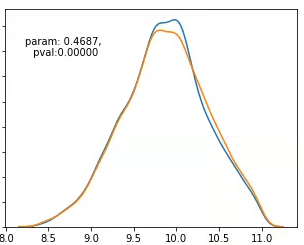 Those are two examples of distributions. Where :

I am working in Python and used the stats.ks_2samp(data1,data2) for comparing.

According to documentation from SciPy 'If the K-S statistic is small or the p-value is high, then we cannot reject the hypothesis that the distributions of the two samples are the same.'

Having p-values with zeros up to the 5th decimal place means that we can reject the hypothesis of the two samples coming from the same distributions, but when I look at the plots they look extremely similar.

What I am missing?

If any additional information is needed for further understanding the problem, please let me know.

The variables in the model are clustering variables, so what I am doing is for each variable and each cluster (for example for people aged between 18 and 25, 26-35, 36-45, etc) I see the distribution (to verify that the new clusters still behave like the original ones, that is why I have different sizes for the plots)

I have also tried "capping" the sample size to the minimum of the two, so that m=n, but results were not better either.

So, this is a little embarrasing. While I was trying to do the cumulative distribution plot Seaborn wouldn't plot and I had error warnings. So I finally realised that I made a mistake earlier in the code. So.. this are the updated plots with the corresponding cumulatives 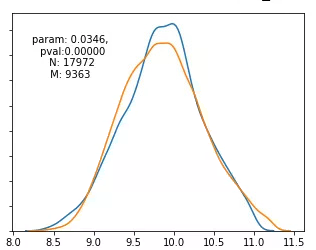 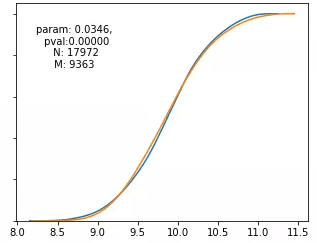 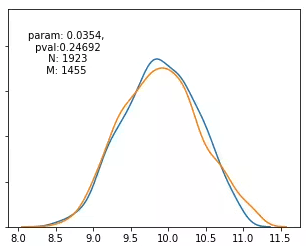 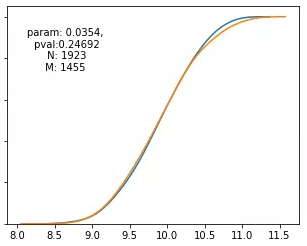 Now in the second row we can see some good improvement. 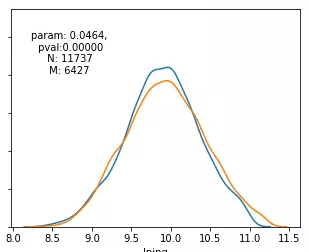 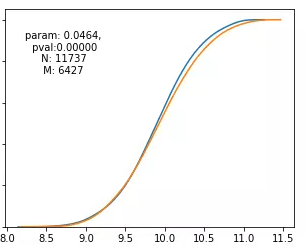 So, eventhough I had made a mistake in the first version, all the answers are still valid because the problem keeps appearing on different distributions.

Updated to keep the question useful for everyone.

Thanks a lot to everyone

What's going on is that you appear to have a large enough sample size to detect a subtle difference that may or may not matter to you. However, your test is giving emphatic evidence that the populations are not identical. Whether or not that subtle difference is important to your work is for you to decide.

I agree with Dave's answer. Would it be possible to see a comparison of the cumulative density functions for the probability densities you have shown? The pdfs do look remarkably similar for a ks metric (= max absolute difference between CDFs) of 0.45. Just to rule out other issues.

Perhaps you could consider alternate tests for easier interpretation? How about Cohen's d? This has a convenient table for interpretation (see https://en.wikipedia.org/wiki/Effect_size#Cohen's_d).

Not the answer you're looking for? Browse other questions tagged hypothesis-testing sample kolmogorov-smirnov-test scipy or ask your own question.