A bivariate copula is the distribution function $C$ of a random variable $(X,Y)$ on $[0,1]\times[0,1]$ where the marginal distributions of $X$ and $Y$ are both uniform (Sklar's Theorem).

The question compares a derivative of $C$ to the values of $C.$ The former is local information while the latter is global (in the sense that $C(u,v)$ accumulates all the probability density of smaller values of $X$ and $Y$ but the first derivatives provide the rates at which $C$ is changing at the point $(u,v)$). We should therefore expect no such inequality to hold generally.

This motivates the following construction of the "$a$-sum" $C\oplus_a D$ of two copulas $C$ and $D.$ For any $0\lt a\lt 1$, we will rescale $C$ to the rectangle $[0,a]^2$ and shift and rescale $D$ to the rectangle $[1-a,1]^2.$ Provided we extend the domain of definition of the copulas to include all real numbers (which formula $(1)$ automatically does), linear transformations easily accomplish this: 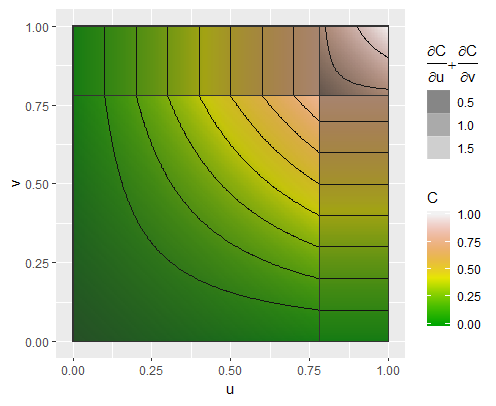 (The vertical and horizontal lines at coordinate $a=0.78$ show where one of the first partial derivatives is undefined. The remaining black curves are the contours of $C.$)

To compare $C$ to the sum of its first partial derivatives, I have shaded the colors according to that sum, as shown in the legend, so that darker areas have smaller derivatives.

Note the region near $(a,a)=(0.78,0.78):$ above and to the right of that point, the first partial derivatives are reset to zero, as indicated by the dark shading. However, the value of $C$ in that region cannot be any less than $a,$ because a proportion $a$ of all the probability lies (by construction) in the square $[0,a]^2$ below and to the left.

In the next plot I have shown both the values of $C(u,u)$ (in red) and the sum of the first partial derivatives (in black). 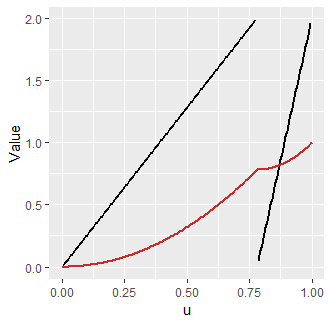 Note that the partial derivatives in this counterexample are undefined at some points. Since the question explicitly entertains such possibilities as $C(u,v)=\min(u,v),$ which have undefined first partials, I have understood that not to be a concern.

$W$ is the distribution function of the perfectly anticorrelated uniform random variable $(X,1-X).$ There is an entire triangular area where $C$ has attained a value of $1/2$ but is flat (both partial derivatives are zero): 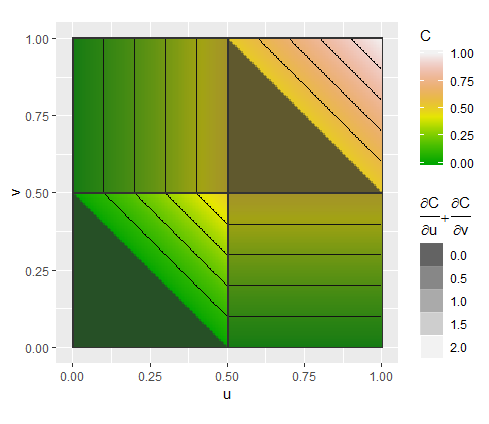 This example is noteworthy because the corresponding random variable $(X,Y)$ is positively correlated: the Pearson correlation coefficient is $1/2.$

Roger B. Nelsen (2005), An Introduction to Copulas. Second Edition, Springer.

I guess that most copulas with sufficient positive correlation should work

These large correlation distributions look like a sort of mountain where the line along $a,a $ is a sort of rib. There is a steep rise to $a,a $ after which it is sort of flat.

See this image from Wikimedia

The image on the right, fully correlated, has even zero derivatives in direction $u$ and $v$ (with a bit of imagination and ignoring that the derivative is not well defined there).

For instance, take the Ali-Mikhail-Haq copula

Not the answer you're looking for? Browse other questions tagged mathematical-statistics copula inequality or ask your own question.