In the context of KNN, why small K generates complex models?

Section 1.4.8 of "Machine Learning: A Probabilistic Perspective by Kevin Patrick Murphy" gives this figure (Figure 1.21(a)) to illustrate the error rate of a KNN classifier for different values of k: 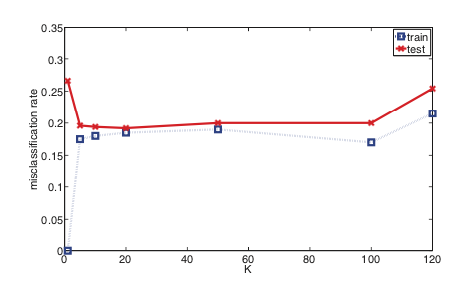 And gives the following explanation:

However, what we care about is generalization error, which is the expected value of the misclassification rate when averaged over future data (see Section 6.3 for details). This can be approximated by computing the misclassification rate on a large independent test set, not used during model training. We plot the test error vs K in Figure 1.21(a) in solid red (upper curve). Now we see a U-shaped curve: for complex models (small K), the method overfits, and for simple models (big K), the method underfits.

kNN in essence is a density based classifier. You pick a point, expand a "window" around that point and pick the most frequent class within the window. It differs from "parzen window" (kernel density estimation) type classifiers in one aspect: the window size is variable - it expands up until it encapsulates $k$ observations.

It might also be useful to think about the other extreme - $k = \infty$. Here the density will be estimated over the whole feature space and you will get the most simple classifier possible: for every new sample predict the most frequent class from the training data.

This can best be illustrated with an example of regression on one dimensional feature space. Say you have a a model that predicts a continuous value $y$, given a continuous feature $x$. And you have 10 points as your training set. The data can be visualised this way: 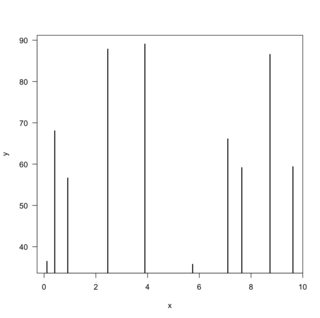 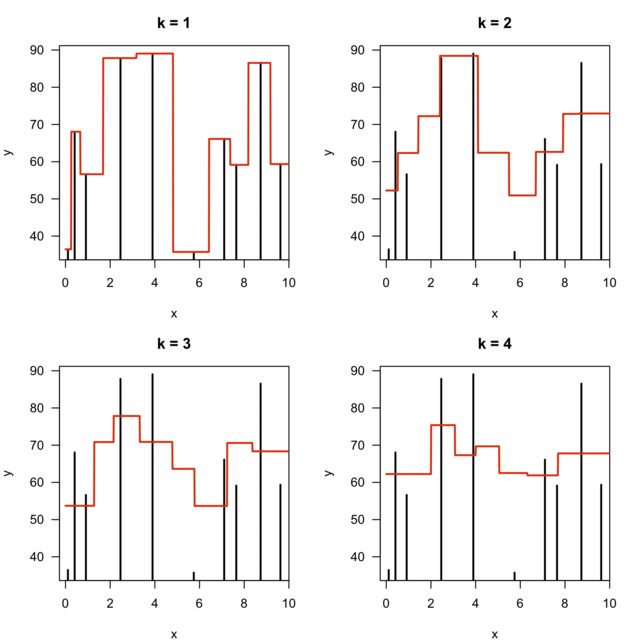 In the above picture note one thing: the number of distinct values (steps) returned by the model is decreasing by 1 with every increase of the parameter $k$.

And of course the model for $k = \infty$ would produce: 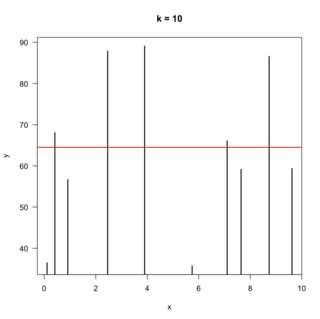 Because, when you choose small $K$, the classifier's decisions will tend to be affected by local changes more easily. The easiest way to visualize it is for $K=1$, which means the decision boundary is affected by every point in the dataset, which means additional complexity drawing them. This is like trying to find a set of rules to please everybody. For example, if you have a lot of points of class $1$ clustered together in some area, just one point of class $2$ will create its local neighborhood around the region and the decision boundary will be affected. There is a wonderful picture depicting this here.

6
Training multiple models for classification using the same dataset
0
How to obtain good performance (low error rate) on massive data set?
5
Can different classification methods be compared in the same manner as models during hyper-parameter tuning?
28
Discussion about overfit in xgboost
3
"Learning curve" behavior comparison
1
Are "empirical distribution function" and "empirical fraction" the same thing?
1
Classification learning curve: function of number of features
3
Why does error rate of kNN increase when k approaches size of training set?
1
Decide which K for KNN-model based on plot