What does it mean "a conditional expectation given a stochastic process"?

I think this is NOT actually a conditional expectation, but it is just a way to denote De Finneti theorem. Isn't it?

Note that $S$ can be seen as a measurable map $\Omega\rightarrow \prod_{A\in \mathscr{B}_{\mathbb{R}}} \mathbb{R}$. If the definition $X|S$ is consistent with the standard conditional expectation definition, $X|S$ is a random variable taking values in $\mathbb{R}$, same as $X$. However, since $X|S\sim S$, $X|S$ must take values in $\prod_{A\in \mathscr{B}_{\mathbb{R}}} \mathbb{R}$. Do you see inconsistency here?

This makes me confusing, so I am curious what's the definition of $X|S$.

Here's the usage of this in "Theory of statistics - Mark J. Schervish" 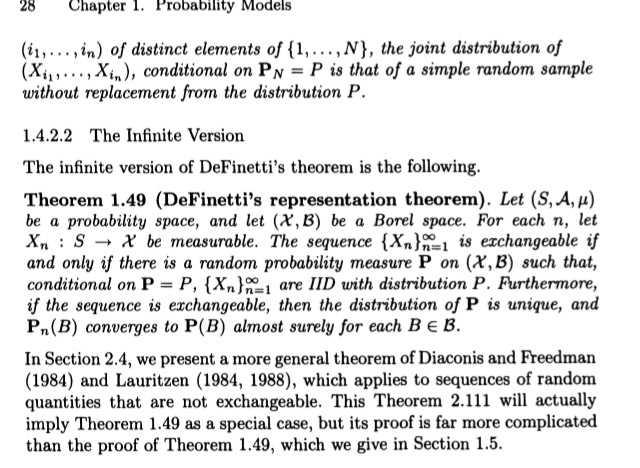 As you can see here, the author says "$X_n$'s are independent and identically distributed as $P$ conditional on $\mathbb{P}=P$."

This means that $X|\mathbb{P}\sim \mathbb{P}$, which I do not get how to formally define it. 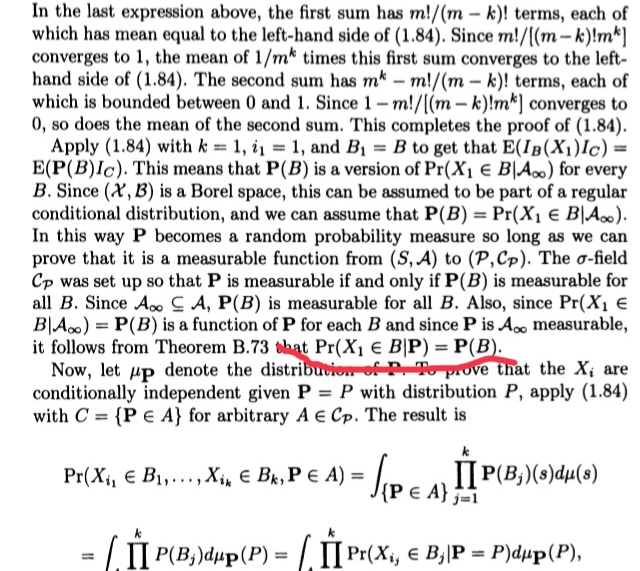 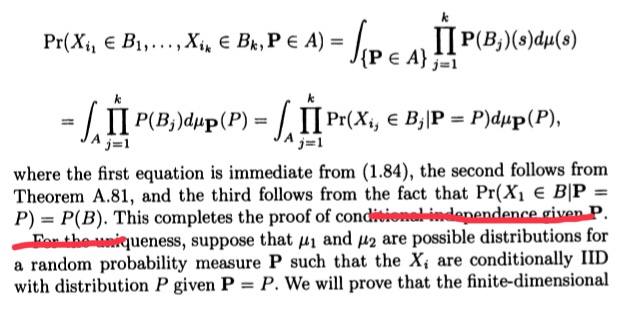 The author says that it is a fact that $P(X\in A|\mathbb{P}=P)=P(A)$. So there must be another definition the author is referring to..

Let $\mu_{X|\bar{S}}$ be a regular conditional distribution of $X$ given $\bar{S}$. (I am not sure if this regular version exists in this case. It must exist if $\mathfrak{M}$ is a sub $\sigma$-algebra of the Borel $\sigma$-algebra of the topology of weak convergence on $Prob(\mathbb{R})$. I think this is true by Portmanteau theorem and the property that every Borel measure on $\mathbb{R}$ is inner regular, but I have to check the details...)

Not the answer you're looking for? Browse other questions tagged probability conditional-probability stochastic-processes exchangeability or ask your own question.