Use a discrete distribution for $X_k$, taking on three possible values $0, 1, 2$ with the probabilities

Regarding my statement I was naively thinking that this would lead to $Z$ being uniform on $[1, 2]$. I think the reason that it doesn't is because for this to happen, the $X_k$'s would need to have the right auto-correlation structure required to form a normal number in the numeration system based on infinite nested radicals. In my experiment, I used i.i.d. $X_k$'s. But for normal numbers (in that system) lag-1 auto-correlation between successive digits (the $X_k$'s being the digits) is close to zero, but not exactly zero. By contrast, in the binary numeration system, the digits $X_k$'s of normal numbers are not correlated, and thus if $X_k$ is Bernouilli of parameter $p=\frac{1}{2}$, then $Z = \sum_{k=0}^\infty X_k \cdot 2^{-k}$ is uniform on $[0, 1]$. But if $p\neq \frac{1}{2}$, then the distribution of $Z$ is pretty wild, see here.

Assume the $X_k$'s are i.i.d. with the discrete distribution mentioned earlier. Then the density $f$ associated with $Z$, if it exists, must satisfy:

My answer has three parts. Part 1 is related to using the discrete distribution investigated earlier for $X_k$. Part 2 is related to finding a family of distributions to meet the requirements of the original question. Part 3 is a generalization to nested cubic roots and continued fractions. 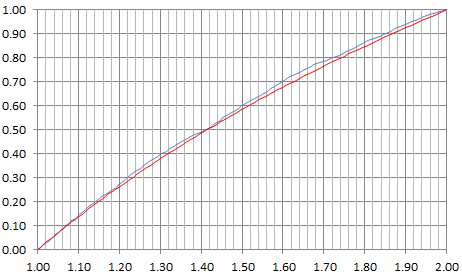 The chart below shows the approximation error $E(z) = F_z(z) - \log_2 z$. Note that the error is maximum at $z = (1+\sqrt{5})/2$. Notable local minima for $E(z)$ include (among infinitely many others) $z=1, 2^{1/4}, \sqrt{2}, \sqrt{3}$ and $z=2$. Also, the curve below seems to be differentiable nowhere, indeed it has some of the patterns of a Brownian motion. In particular, one can see a fractal behavior, with the successive double-bumps (followed and preceded by a big dip all the way down to $E(z)=0$) repeating themselves over time but being amplified as $z$ increases. The maximum attained at each double-bump seems to be exactly 2 times the maximum reached at the previous double-bump. 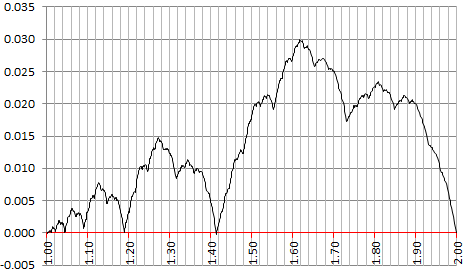 Note that $Z$ can not have a log-normal distribution unfortunately, because $Z$ can not be lower than 1 (prove it, this is an easy exercise.) A potential candidate for $Z$'s distribution is uniform on $[1, 2]$, or log-log-normal, that is $\log\log Z$ is normal.

Below is a chart based on $X$ being log-normal (see here for more.) It looks like $\log \log Z$ is almost normal, but it is not exactly normal. 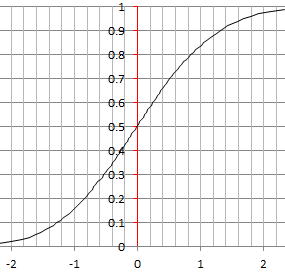 Not the answer you're looking for? Browse other questions tagged machine-learning distributions mathematical-statistics characteristic-function stable-distribution or ask your own question.

1
Likelihood Ratio Test for Poisson Distribution
4
Application of Central Limit Theorem - Uniform Distribution
7
Asymptotic joint distribution of the sample medians of a collection and a sub-collection of i.i.d. random variables
1
Multivariate (Polynomial?) Regression
1
What is the distribution of a random variable whose pmf is a function of other pmfs?
5
Existence of a random vector such that the differences of its components satisfy some restrictions
0
A question about the test statistic for testing the difference in two population proportions