I need to count the number of cells in several pictures. Since the picture is not totally clear, I let two people to count for each picture. I need to compare to see if the two counts are close enough so that I can use them, or else I would need a third count. What type of test can I use?

I suggest a chi-squared test for homogeneity. Begin by making a table of observed counts as follows, with rows for your two counters, and five columns for the pictures. In R, you can make the table and do the test as follows:

The large P-value 0.9156, greater than 0.05, tells you that you cannot reject the null hypothesis that the two counters perform essentially the same.

You should look at a general explanation of this kind of chi-squared test is an elementary statistics text, or online. Here are some particulars of the R output for your data, which show how the test is done.

First, the observed counts can be echoed back for proofreading to make sure you put the correct counts into the computer.

The observed value of the chi-squared statistic (shown as a heavy vertical line in the plot below) is near the center of the distribution and not at all remarkable. This means that the corresponding observed and expected values in the table are in good agreement.

In the figure below, the P-value of the test is the area under the density curve to the right of the that line. You would have rejected the null hypothesis at the 5% level, if the P-value were smaller that 0.05. [Generally, printed tables of chi-squared distributions are not adequate for finding P-values; they are often given in computer output] 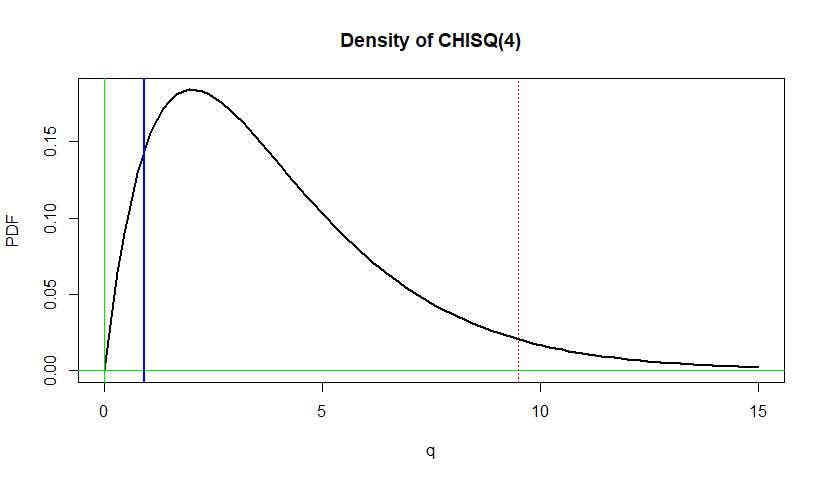 Notice that there are two (mathematically equivalent) indications to reject the null hypothesis at the 5% level: (a) The test statistic is greater than the 5% critical value, (b) The P-value is smaller than 5%.

Not the answer you're looking for? Browse other questions tagged inference count-data differences or ask your own question.