I'm looking for an intuition, apologies for the non-technical language.

In Bayesian Learning one starts from prior knowledge and incorporates a new fact to obtain posterior knowledge.

Is there a parameter that regulates how quickly I change my mind in face of new facts?

In non-pathological examples, the prior's variance plays an important role in the "stubbornness" of estimates, especially in hierarchical models. This is very well shown in the 8 schools examples in BDA3. 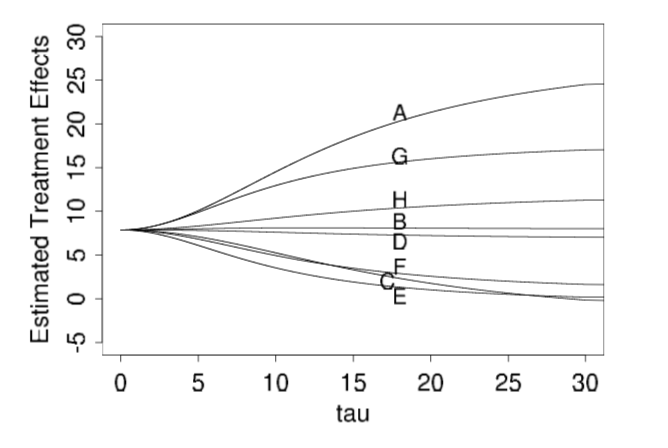 so as the sample size $N$ grows large, the likelihood would play greater role in the posterior. Informally, likelihood enters the formula $N$ times, while the prior only once. Of course this is not that simple.

As you already noticed, you could use a degenerate prior $p(\theta = c) = 1$ and $p(\theta \ne c) = 0$, that would be zero for any value other then $c$ (because of multiplying by zero). In such case, the prior would zero-out everything that is inconsistent with it. Another extreme would be "uninformative" prior $p(\theta) \propto 1$ that plays no role in the posterior (because you always multiply by same constant). Everything in-between depends on how peaked is your prior around the value of interest, where the higher values you assign to some value, the more influence would the prior have on the outcome.

The likelihood would usually de determined by the data, in the sense that you don't manipulate it to influence the results, it is only used to describe the model in probabilistic terms. As you can see, all the data points (the new "facts") have same "weight".

So, you regulate how much the prior influences the posterior by making the prior more, or less, informative. There is no additional parameter for this.

87
What is an "uninformative prior"? Can we ever have one with truly no information?
35
Do Bayesian priors become irrelevant with large sample size?
2
could someone please give a concrete example to illustrate the Dirichlet distribution prior for bag-of-words?

2
Posterior distribution and computation of probability of a future event
22
Combining information from multiple studies to estimate the mean and variance of normally distributed data - Bayesian vs meta-analytic approaches
2
How do I correct for gender bias for Bayesian credible intervals?
10
How does one formalize a prior probability distribution? Are there rules of thumb or tips one should use?
0
Correcting an unnormalized posterior for the weighting of the prior
6
The meaning of Bayesian update
4
Modelling and interpreting brms output
0
Bayesian regularization intuition - what is a distribution of weights?