I am designing a one year program in data analysis with a local community college. The program aims to prepare students to handle basic tasks in data analysis, visualization and summarization, advanced Excel skills and R programming.

I would like to prepare a set of short, real world examples that illustrate where ordinary intuition fails and statistical analysis is necessary. I'm also interested in "famous statistical fails", but more interested in the wins. The data involved should be freely available.

A perfect example of what I'm looking for is the Berkeley discrimination case, which illustrates Simpson's paradox. The data for that is memorialized in R's datasets.

Historical cases are also interesting. John Snow's analysis of the Broad Street pump data is a good example of the power of visualization.

There are a lot of fails in the collection of data (selection bias), etc. and the literature in medical statistics is full of them.

A lot of "statistical wins" occur in the area of variable selection and sampling design. I'm interested in paradoxes that occur in other areas -- like the analysis as such.

Described here. Digits do not appear with uniform frequency in front of numbers, but rather follow a specific pattern: digit 1 is the most likely to be the first digit, with 30% chance, followed by 2 (17.6% chance), and so on. The following picture (from Wikipedia) shows the frequency of each digit at the beginning of each number, in some naturally-occurring datasets: 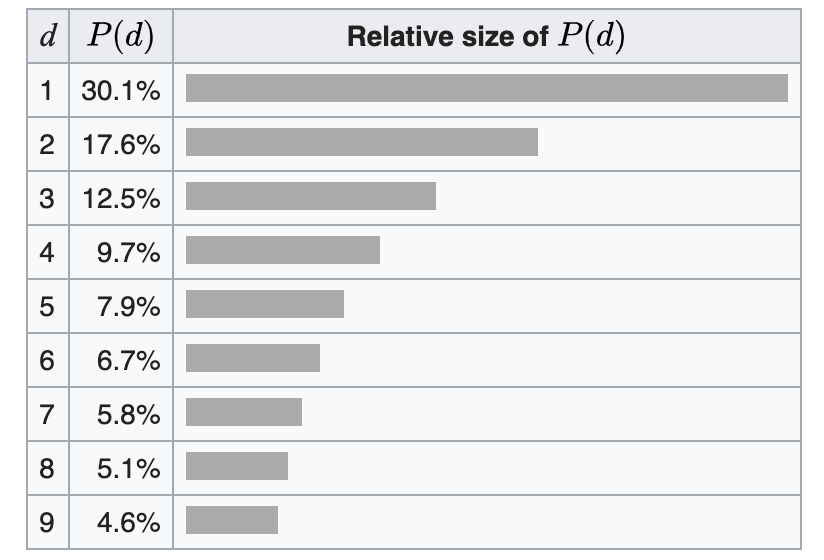 There are certain conditions under which the law holds (e.g., the data should span across several scales, so stuff like peoples' heights are not eligible), but it is quite generic.

Perhaps the most surprising application is in fraud detection. This is based on the assumption that people who try to fabricate figures tend to distribute the digits uniformly, thus violating Benford's law.

I recall once I was explaining this to a class, and in the break one of the students came up with an accounting spreadsheet from his company, in which he had tried to validate my claims. It worked :)

Described here: The frequency of a word in a corpus is inversely proportional to its rank. What is surprising is that this relationship holds for any corpus, even for ancient languages that have not yet been translated. An interesting video explaining more about why this pattern may hold is here. The following picture shows rank (horizontal) vs frequency (vertical) in a log-log scale for the first 10 million words in 30 Wikipedias (source). Note that the law would predict a straight line: 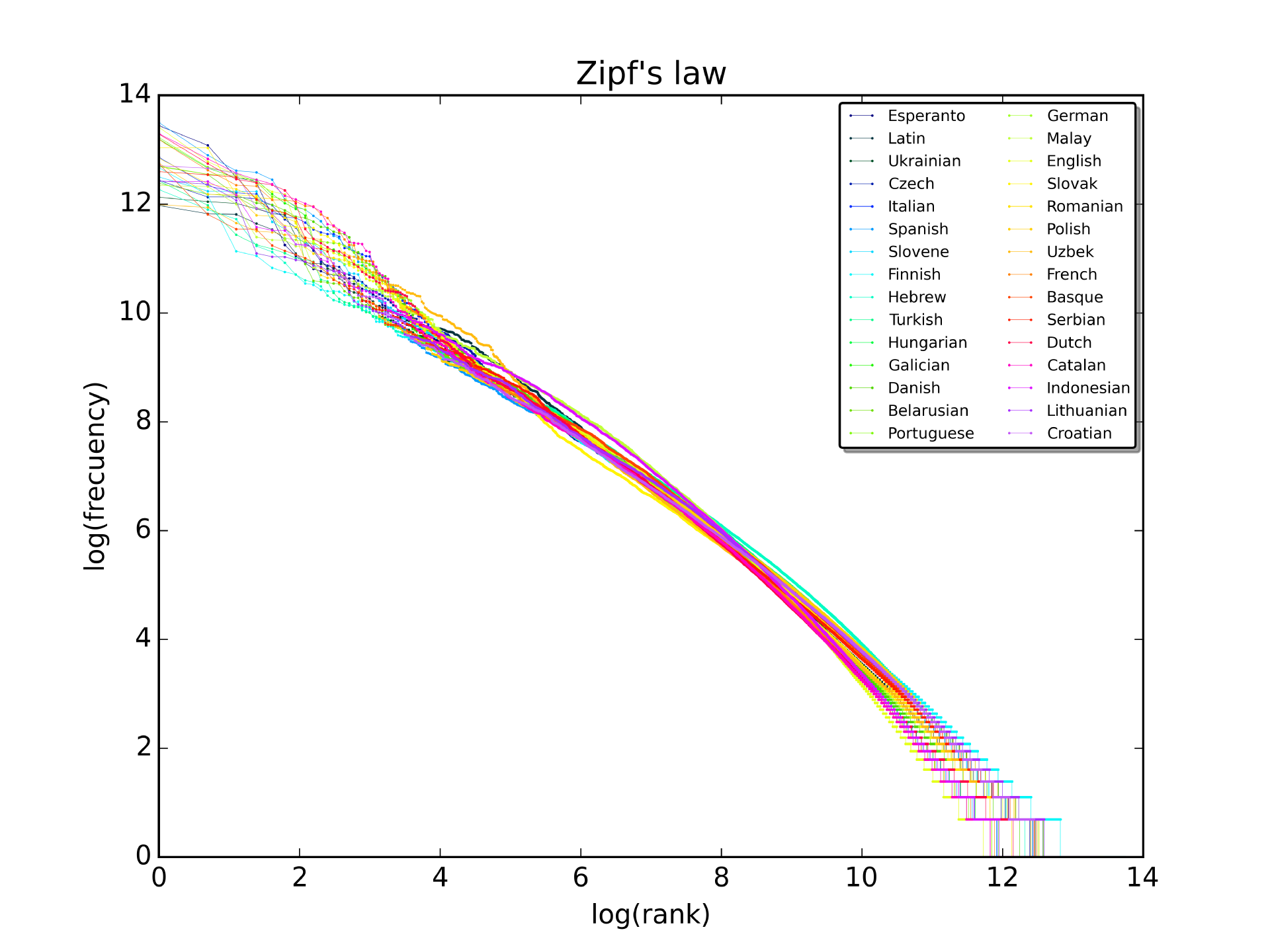 These two laws are powerful and counter-intuitive, and in the sense that they enhance one's understanding of the world via statistics, they could be called "statistical wins".

I really liked the German tank problem. It shows, how data which is usually considered as irrelevant becomes valuable information in the hand of a statistician. Furthermore, I liked the law of small numbers and the base rate fallacy.

R vs Sally Clark is a famous case of a woman being convicted for murder because the court was unaware of statistics and probability base principles.

But if I have to say the thing that impressed me the most, when I begun studying statistics, that is regression to the mean, which also gave the name to statistical regression (even if that is a completely different thing). The nobel prize winner (for economics, even if he's a psychologist) Daniel Kahneman told a fascinating anecdote about how he realized how regression to the mean can lead people to false beliefs.

Edit: One other very insteresting story that just came to my mind, and concernes importance of missing data instead, is the one of Abraham Wald and war planes bullet holes.

To illustrate where ordinary intuition fails, the Monty Hall paradox is a great starter.

Another interesting case as to how wrong gambling can go is the Monte Carlo Casino example.

In a game of roulette at the Monte Carlo Casino on August 18, 1913 the ball fell in black 26 times in a row. This was an extremely uncommon occurrence: the probability of a sequence of either red or black occurring 26 times in a row is around 1 in 66.6 million, assuming the mechanism is unbiased. At that time, Gamblers lost millions of francs betting against black, reasoning incorrectly that the streak was causing an imbalance in the randomness of the wheel, and that it had to be followed by a long streak of red.

Gambler's fallacy and Gambler's ruin give a good explanation for this example.

I find the false positive paradox remarkable because it is so counter-intuitive. A good example:

Cancer screening of the general population does not increase life expectancy, even though clearly lives are saved because some cancers are caught early and can be treated better. The U.S. Preventive Services Task Force accordingly stopped recommending routine screening for women aged 40-49 in 2009.

This is good teaching material because it is a non-trivial real-life example which concerns almost everybody at some point in their lives. There is an article by the National Cancer Institute here.

Only class 4 profits from screening, at the expense of large numbers of unnecessary hospital visits, unnecessary biopsies and a lot of sleepless nights. All of these are small but measurable health risks which accumulate over the large number needed to treat, outweighing the very real benefit for the small number in subset 4.

My favourite example, as an illustration of how faulty statistics can have long-term consequences when they are used to direct government policy, is the act of large-scale railway vandalism known as the Beeching Axe. It resulted from a Transport Minister with strong ties to the road-building industry (Ernest Marples) hiring a petrochemicals-industry expert (Richard Beeching) to determine which parts of the British railway network were making losses and should therefore be pruned.

About 4000 route miles were closed as a direct result, with a direct positive effect on demand for roads (and, inevitably, much of today's congestion). Further closures continued into the 1980s, including the important and relatively recently upgraded Woodhead route across the Pennines, and halting only with the case of the Settle & Carlisle line, which had once been the northern section of the Midland Railway's main line.

It is perhaps noteworthy that Marples subsequently fled the country to evade prosecution for tax fraud. Suspicions of conflicts-of-interest were also held at the time, as he had sold his 80% stake in his former road-building form Marples Ridgeway (as legally required by his ministerial appointment) to his wife, thus making it easy for him to reacquire them subsequently.

One good source on the subject is "I Tried to Run a Railway" by Gerard Fiennes.

The statistical errors involved here were largely down to taking an excessively narrow view of the problem. Branch lines' stations were visited to examine their receipts and take surveys of traffic - but seasonal traffic which used the line and whose tickets were sold elsewhere in the country was ignored. In many cases costs were inflated by obsolete working practices which could have been streamlined, but this option was not considered at the point of choosing which lines would be closed entirely. This also led to some lines whose losses were only slight, and which indirectly benefited the railways as a whole through the "network effect" of being able to reach destinations without a change of mode, being included on the closure list.

These errors were repeated in the later Serpell Report which proposed an even more drastic closure program, but which was fortunately rejected.

Today, railway traffic demand is rising sharply in Britain, and lines are being newly built and reopened to meet demand. Some lines closed by Beeching and Marples' efforts would be highly beneficial if they still existed today.

Nice QA! here my two cents: It is mainly about how correlation can be very suspicious and some traditional ways to work it out:

To elaborate a little, the canon for correlation vs. causation in modern statistics is certainly Judea Perl. Nielsen's (web)book provides a good review:

I don't know if this counts as "intuition falls short", but rather a "naive analysis gives a counter intuitive, and misleading, answer".

One of my stats professors introduced a study regarding the connection between smoking and FEV in young students.

FEV can be considered to be a measure of lung volume. When the professor first introduced the data, he asked what we thought the relation would be. We all thought that smoking would be linked to lower FEV. However, looking at the data, that was not true! In fact, smokers had larger FEV's than non-smokers. Was this class being taught by a smoking-denialist?

Then, he reanalyzed the data, but this time adjusting for age. With this was done, we saw what we expected to see: a negative impact of smoking on FEV. This was because smokers were much more likely to be older students than younger students. While smoking did have a negative impact on their FEV, it was not so much that it completely eliminated the increase in FEV from growing up.

A link to a walk through of the data in R can be found here.

Share
Improve this answer
answered Nov 4, 2019 at 9:16
community wiki
Michelle
$\endgroup$
2
Add a comment  |
-1
$\begingroup$
Want to improve this post? Provide detailed answers to this question, including citations and an explanation of why your answer is correct. Answers without enough detail may be edited or deleted.

For the last year and a half Bloomberg News has made periodic estimates of Tesla 3 production using multiple data sources. They just terminated this work but I think the history is interesting.

Not the answer you're looking for? Browse other questions tagged mathematical-statistics data-visualization experiment-design teaching or ask your own question.