Diagnostics in DHARMa for glmmTMB model

I am fitting models to a data set with 370 observations. It is ecological data with overdispersed counts as a response variable.

I have used the DHARMa package to show this overdispersion from a poisson distribution visually. As such I have been trying to get a well fit model using the nbinom1 and nbinom2 family arguments in glmmTMB. like so:

However, I have not managed to get a 'non-significant' deviation of the simulations from my predicted model as shown in the image below. Even after trying up to 5000 simulations. 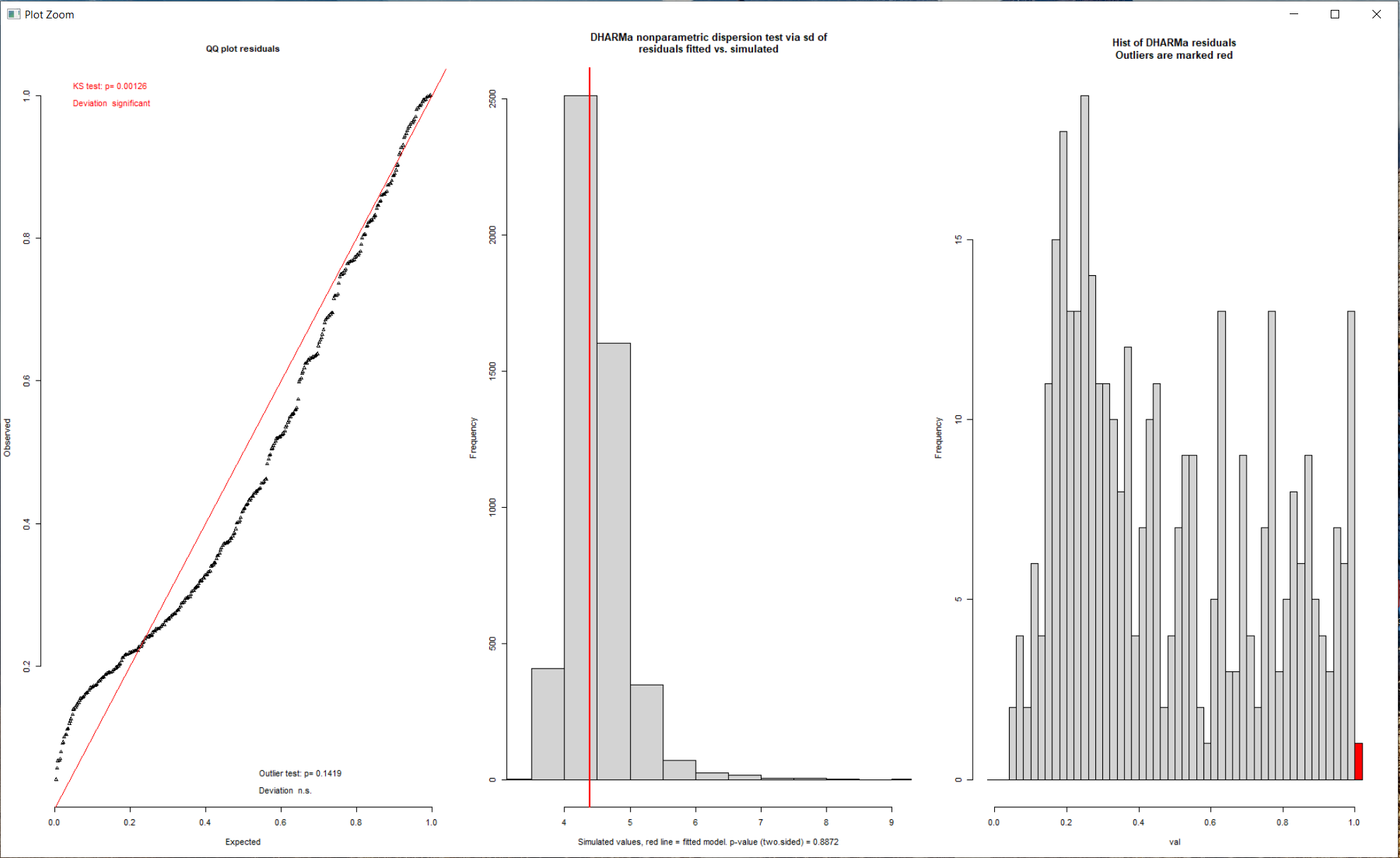 I notice from the graphs that there is a peak in the histogram on the left side, that I interpreted as the bad fit of the QQ-plot close to zero. I also note that this shape (QQ-Plot) seems somehow similar to an underdispersed data set as shown in this vignette. I have not found a way of dealing with underdispersion (if that is the issue) in glmmTMB since I don't see an option for quasi-poisson distributions. Plus I thought the middle graph indicates the dispersion is more or less how it should be.

I have scoured the internet for weeks for other info on how to improve the fit, but either it is tacit knowledge or I am looking in all the wrong places.

Should I walk away at this point and in the write up basically void this model by saying it was not robust (i.e. too much variation between predictions from the fitted model) or do I still have some options? Ideally, I am looking for practical advice.

A couple of notes:

Not the answer you're looking for? Browse other questions tagged mixed-model generalized-linear-model diagnostic or ask your own question.

2
Interpreting dispersion parameters of poisson GLMM with count data
0
How to define the nu parameter of Conway-Maxwell-Poisson in spaMM package
2
Rules of thumb for partial residual (component + residual) plots as diagnostics for linearity?
4
Selecting between a zero-inflated binomial, OLRE and beta-binomial model
2
DHARMa diagnostics: residuals vs. predicted for categorial predictor
4
Model misfit with DHARMa - What needs/can be done?