I am a biologist, with very little knowledges of statistics. I am looking for highly variable genes from a data set. I have calculated the coefficient of variation of the expressed genes of my dataset and inserted them in a histogram graph. Now I should select only the highly variable genes.

Should I select genes with a coefficient of variation >1, or how? 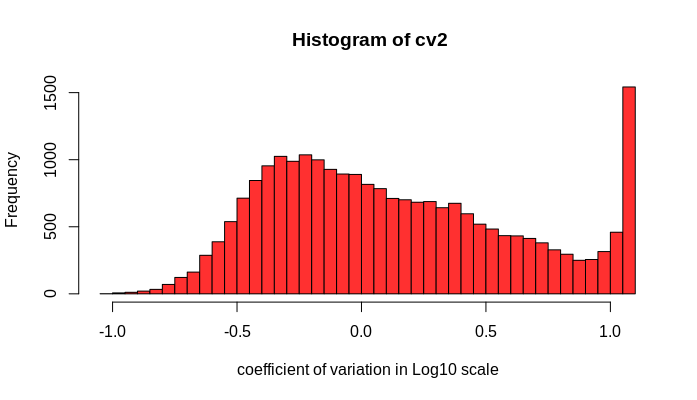 The problem with focusing on the coefficient of variation alone is that it can be high either because of interesting biological variation among conditions or because of measurement error. In particular, very poorly expressed genes tend to have high coefficients of variation for technical reasons, as noted on this page in a brief discussion of statistical methods for analyzing RNAseq expression data (with similar considerations for microarray data).

So you would be better off considering both expression level and coefficient of variation. If you have a situation where there are a few groups (treatments, types of individuals, etc) each of which has multiple samples analyzed, it could be more biologically informative to look at genes that are highly variable among the groups rather than genes that are highly variable among samples overall. You will then be less likely to identify genes whose high coefficients of variation are just due to measurement errors.

Not the answer you're looking for? Browse other questions tagged bioinformatics coefficient-of-variation or ask your own question.

4
Why do we need to model RNA-seq data using Poisson, negative binomial,