Let's say I have two variables (smoking and lung cancer) that I'm trying to plot on a time series graph.

Note: The number of people given in this example is made up. The actual figures were converted to a percentage.

Now, my question is how do I plot the years on the x-axis when one has two years like in smoking and one has only one year like for lung cancer?

I seriously hope I made sense in what I was trying to say.

What about combining two plots like this? You can also use percentages instead of the actual number of people. I could share with you the source code (in R) if you wish. 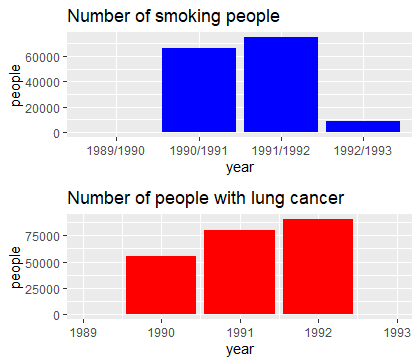