Should I use multilevel modeling? One between-subjects continous predictor, one within-subjects categorical predictor

I have recently collected my dissertation data. I would like to know if I should use multilevel modeling to answer my research questions.

Here is a brief summary of my method:

In my data set, I refer to the first passage as 'control' and the second passage as 'promiscuous'.

Participants then completed a religiosity scale. Religiosity was measured with 8 items using 7-point Likert scales. The mean score for these 8 items served as a measure of participant religiosity, with higher scores indicating greater religiosity.

Therefore, I have two predictors:

My criterion/dependent variable is Outfit Modesty (continuous data, ranging from 2.67 to 6.41).

Note that the Outfit Modesty data are not normally distributed for either passage, as you can see below: 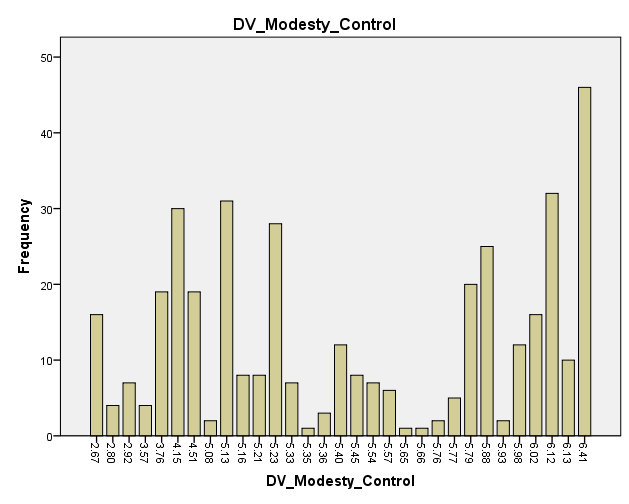 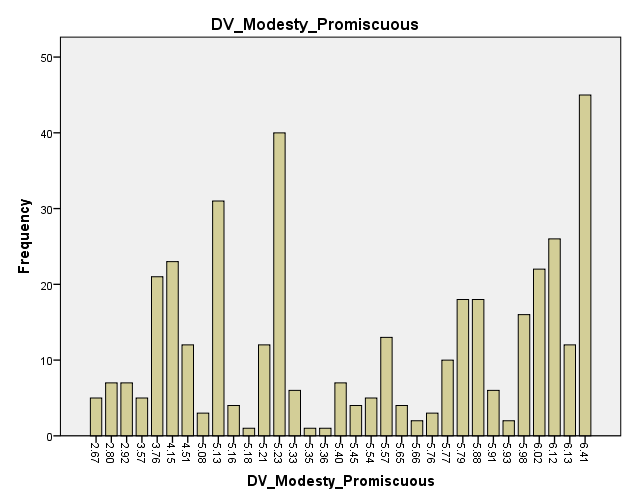 Also, the data distribution for Religiosity seems bimodal, as you can see below: 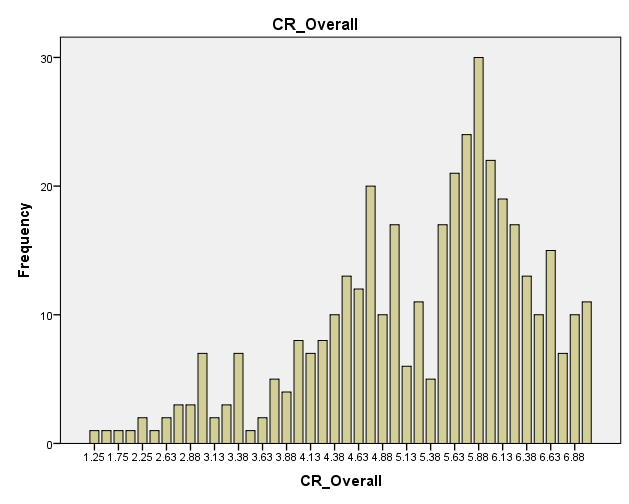 Can I and should I use multilevel modeling?

The data structure you describe is compatible with a multilevel modeling approach. Your model would take the following form:

Technically the interaction is a "cross-level" interaction, meaning that you are interacting a L1 occasion-specific variable by an L2 person-specific variable. In these cases, recent research by Heisig & Schaeffer suggests that you should allow the level 1 variable to vary across persons (often referred to as a random slope in the MLM literature). However, all subjects were exposed to the same two vignettes, so it doesn't make much sense to estimate a varying slope.

As you note, your outcome is not "normally" distributed. This is not a requirement for a linear MLM, however you will have to look at the level 1 (and level 2) residuals for your MLM to see whether they follow a normal pattern (see notes on MLM diagnostics here). If not, you may need to consider transforming your outcome scores somehow or using a generalized multilevel modeling approach.

I would recommend using MLM, however if you wanted to go in a different direction you could use one of the relevant ANOVA-type models. In your case, you might consider the random (or mixed) effects two-way ANOVA with a covariate. But the MLM is just a more parsimonious version of this model, providing arguably more information. See Robert Long's answer to this prior CV question for further information on the two approaches.

Not the answer you're looking for? Browse other questions tagged mixed-model multilevel-analysis or ask your own question.

40
Under what conditions should one use multilevel/hierarchical analysis?
2
Multilevel modeling: longitudinal data with within-subjects factors
3
Interactions between levels in lme4
0
Mixed-effects models for within-subject psych experiment (in Stata)