Combination of correlations: How to correlate compositions?

How to correlate a set of compositions to a same-sized set of estimates of these compositions?

Imagine you have a mixture of 5 liquids A+B+C+D+E, which in total have a concentration of 1. You have a test (or heuristic) to determine the concentration of each liquid separately but the tests are quite vague: For an evaluation of the test, you measure 100 reference-mixtures with known real concentrations [A,B,C,D and E].

Here, as an invented example, the real A-content vs the "tested" one: 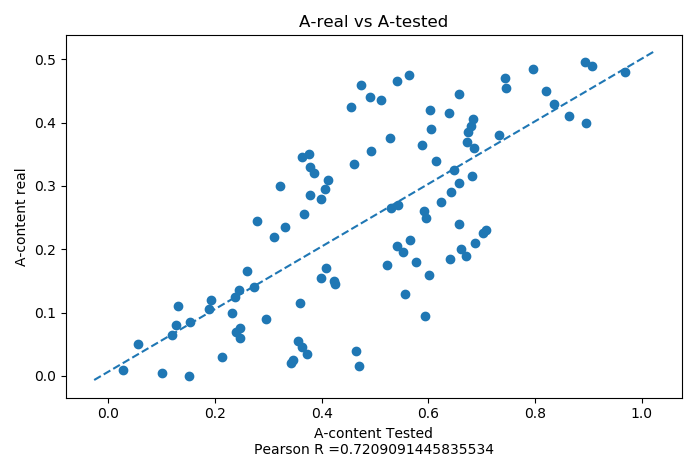 So you can show the correlation (real vs test) for each of the 5 contents separately!

But my question is now: How to combine the 5 individual correlations? Can you recommend a way to show the correlation to the combined composition? (composition = the ratios of the individual contents A,B,C,D and E, which together are always 1)

I want to show that the tests can estimate the overall composition, not the individual concentrations, which means: composition(estimated) vs composition(real)

I would prefer a statistical method that can be visualized and does not just give a single number as the output. I thought of using the sum of products (estimated vs real) (AxA + BxB + CxC + DxD + ExE) and comparing it to permutations of the same contents/estimates. But I don't know how to evaluate or visualize this approach. I am thankful for any ideas or references to established methods!

It appears that you could simply run the correlation between the known composition and the result of the composition test. That is, for each component, plot the true proportion of the sample against the estimated proportion.

I will note, however, that I don't expect that the proportion will be meaningfully more accurate than the individual measures of the concentrations. The only exceptions would be if the errors are correlated (e.g., if they all run high or low together) or if one of the tests is much more accurate (because its share will be more accurately known).

Here are some sample data (in R, using tidyverse):

This is different if some portion of the error is shared between the various measures. If I make half of the noise in the test result the same for each of the measures in a sample, like this:

Then, the correlations are stronger for the proportions:

So, the benefit of this approach is entirely dependent on the relationship between the errors in testing the concentration of the various components. The stronger the (positive) relationship, the more benefit this will have.

Not the answer you're looking for? Browse other questions tagged correlation pearson-r compositional-data forecast-combination or ask your own question.

1
How to interpret correlations with negative numbers in SPSS
11
How to compare the strength of two Pearson correlations?
1
Interpreting correlations
5
How to use isometric logratio ilr() from a package “compositions”
1
How to correlate closed data?