Difference/relationship between power and significance

What is the conceptual difference between statistical power and statistical significance?

Are they the same? Is one used for the other?

The frequently used, joking but correct illustration is the use of a pregnancy test, which from time to time may turn to be negative for a visibly pregnant woman (Type I error) and return a positive result for a man.

Both concepts are unified in the form of the risk function.

Generally, a statistical procedure $t$ can be considered a principled way of determining some action to take upon observing data governed by some probability distribution $F$ (aka "model" or "state of nature") that is not completely determined (some of its properties are unknown). When the action can be quantitatively compared to the action that would be performed if the distribution were known, it becomes possible to compare procedures quantitatively, too.

The comparison requires us to consider--hypothetically--every possible $F$ that might occur. For a given $F$, the data $X$ are considered a random sample of $F.$ The procedure $t$ determines the action $t(X)$ to take upon observing $X.$ Let $a(F)$ be the best possible action to take if $F$ were known. The value of the loss function $\mathcal L$ is zero when $t(X)=a(F)$ and otherwise is some positive number representing the "cost" or "loss" associated with taking the possibly inferior action $t(X).$ Usually the loss is directly expressed as a cost of doing $t(X)$ when $F$ is the true state of nature, written

The risk associated with $F$ for the procedure $t$ is the expected loss,

We might as well choose units in which this common value is $1.$ Mathematically, this binary loss function can be expressed as

From this we may easily compute that the risk function is

(Since we will be discussing the binary loss function from now on, I have dropped all references to it in the notation.)

So far, there has been no essential difference between $\Theta_0$ and $\Theta_A,$ nor need there be. However, null hypothesis testing is usually conducted in an asymmetrical way: one chooses procedures that limit the risk when the null is true. This limiting risk is the "size" of the test, or its "alpha," given by

One selects a test that tends to make the values of the risk function for the alternative hypothesis as small as possible. Which values, exactly? It depends on your objectives and assumptions. Thus, it's common for the statistician to ask her client for (a) an acceptably small value of $\alpha$ and (b) some indication of the largest risks the client can endure for some key models in the alternative hypothesis. Let's look at an illustrative example.

Figure 1 shows a textbook case where $\Theta_0$ is the set of Normal$(\mu,\sigma^2/n)$ distributions with $\mu \le 0$ and $\Theta_A$ is the set of Normal$(\mu,\sigma^2/n)$ distributions with $\mu\gt 0;$ both $\sigma^2$ and $n$ are fixed. The procedure is the usual "Z test." ($n$ is a potential sample size; varying $n$ causes the risk to change, enabling one to determine a sample size that makes the risk function acceptably low.) 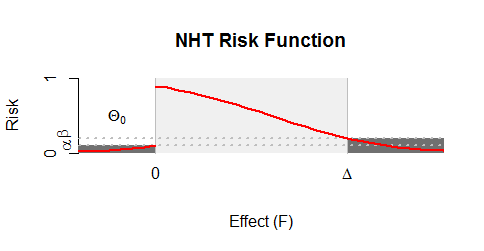 The backgrounds summarize the conversation between statistician and client:

The client has selected $\alpha,$ $\beta,$ and the left hand limit $\Delta$ of the right black rectangle. This value $\Delta$ is an "effect size." We may characterize the states of nature with $\mu \ge \Delta$ as being "extreme" because they differ most substantially from any state in the null hypothesis. By limiting the risk in the extreme states we are, in a way, modifying (or weighting) the loss function to reflect a sense that false positive errors made for extreme states are worse than false positive errors made for states in the intermediate gray area.

What this test accomplishes, then, can be stated as follows:

The test $t$ is a procedure that limits the risk to $\alpha$ for the null hypothesis and limits it to $\beta$ for the "more extreme" parts of the alternative hypothesis.

It is conceptually very useful to keep Figure 1 in mind when thinking about NHTs, for it shows clearly that although the error rates are controlled, they nevertheless depend on the true (but still unknown!) state of nature.

This figure is usually drawn by flipping the risk upside-down in the alternative hypothesis, as in Figure 2: 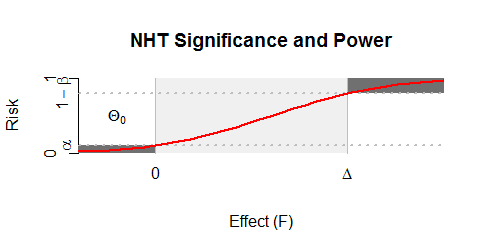 This "power curve" is simply the chance of making a "reject" decision. By comparing this figure to the previous one, you can see that where the power is high, the chance of making a false negative error is low. Because the test is constructed to assure the chance of a "reject" is low throughout $\Theta_0,$ often the power curve isn't even plotted for the null hypothesis: it simply is summarized by the test size $\alpha.$ The "significance level" of the test is just $1-\alpha,$ or $90\%$ in this example.

Kiefer is a decision-theoretic account of statistics. I have used his language and notation. US EPA uses graphical explanations (similar to the second figure here) to help people develop appropriate quantitative criteria and statistical procedures for environmental decision making. This guidance has been adopted by many other US agencies, such as the Nuclear Regulatory Commission and Department of Energy: see NUREG-1575 for one example out of many. The term "gray area" or "gray region" is taken from these guidance documents.

No, it is not the same. The fact that both terms have separate Wikipedia entries is a first hint. In Null Hypothesis Significance Tests (NHST)

Power is a design concept: it is the probability of making a per-specified decision conditional on a posited true state of nature, i.e. your alternative hypothesis. It therefore only ever makes sense to talk about power before you've embarked on your experiment: sampling, data collection, intervention, etc.

Statistical significance is an analysis concept: it is a subjective decision based upon the probability of observing the data you've already collected (or more 'extreme') conditional on what you would consider the null setting.

To summarize, there are three main differences:

Not the answer you're looking for? Browse other questions tagged hypothesis-testing statistical-significance statistical-power or ask your own question.

41
Interpretation of p-value in hypothesis testing
21
What is the difference between "testing of hypothesis" and "test of significance"?
1
Why do we need statistical power? Why are p-values not enough?