Why are the MLE and MMSE corrections for sample variances different?

While struggling with the question of how the sample numbers (planning to average corrected values) affect the sample variance corrections I should be using (because increased sample number of averaged sample values decreases the average's variance without decreasing its bias), I came across another concept I was unfamiliar with.

If I understand correctly, each of these is corrected denominator for when estimating a population variance from a single sample (rather than an average of values from multiple samples), thus I cannot use them directly in any case.

Reiterating, I wish to use the approach which will give me the value theoretically closest to the true population variance value, given the information available to me. I thought this would be the approach which gives the minimum mean squared error ('getting arrows clustered as closely to the bullseye as possible'), but then how can the maximum likelihood estimator (the value which is most likely to give rise to the observed data) be different?

To rephrase, given that I want to get a final value which is close as possible to the true value (of the population variance), which of these approaches--MMSE and MLE--is the wrong approach, and why?

(Of course, if there is yet another approach which serves my intention even better that I haven't heard about yet I would be glad to learn of it!)

Here is a brief simulation with standard normal data, for which $\sigma^2 = 1.$ In the simulation v1 is a vector a million unbiased estimates $S^2,$ each for a sample of size $n = 10.$ 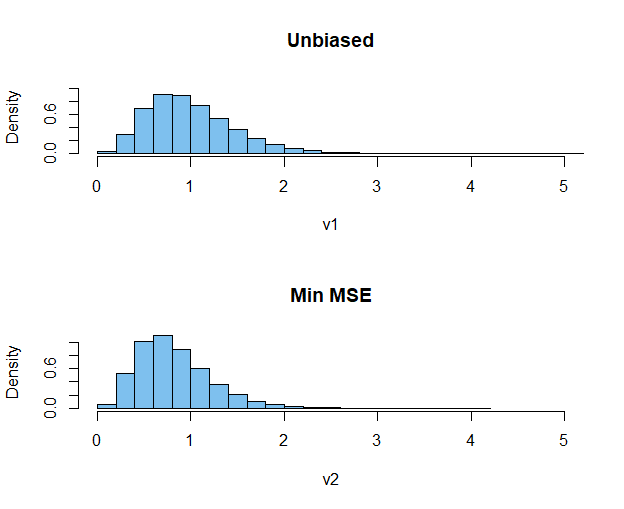 Formal analytic proofs are not difficult.

Addendum per Comment. Although for normal data the usual definition of the sample variance (denominator $n-1$ gives unbiased estimates of population variance $\sigma^2,$ unbiasedness does not survive the nonlinear operation of taking square roots. Thus it is not true that $E(S) = \sigma.$ In particular, for normal samples of size $n=3,$ one has $E(S) \approx 0.866\sigma,$ so that $E(S/0.866) = E(1.155\,S) = \sigma,$

Not the answer you're looking for? Browse other questions tagged variance maximum-likelihood mse bessels-correction or ask your own question.

26
Maximum Likelihood Estimation -- why it is used despite being biased in many cases
0
How can I identify an unfamiliar cumulative distribution function?