How to equalize the chance of throwing the highest dice? (Riddle)

Imagine a dice game with the aim of throwing the highest dice. The dice are special and have infinite sides with numbers ranging from 0 to 1! (uniform, no bias)

There are 2 players: Player-A has 3 dice to throw, player-B has 7 dice. This means player-B has a chance of 7/10 of winning, which is to throw the highest number of all 10.

Now, to bring fairness to the situation, the players agree to multiply each number thrown by player-A by a certain constant. What is the value of this constant, so that each player has a 50% chance of winning?

Can you find a general formula to determine this constant, based on the amounts of dice the 2 players have?

(And in case this is a known problem: Do you know how this is called?)

Considerations/ Spoiler: The adjustment-constant does not just depend on the ratio of throws (3:7 in this case); instead, the absolute number is important. For example, if the players had 300 and 700 throws, then this constant would be much closer to 1.

My intuition: I think a good estimate is to assume a homogeneous distribution of the throws: For example the 3 throws are at decimals 0.25, 0.5 and 0.75! Now the highest number would be 0.75! Do the same with player-B and you get the ratios of the expected highest numbers (-> the adjustment-constant). Unfortunately that's just my intuition and I am not sure if this is correct.

EDIT: I am thankful for all the answers but surprised that nobody used an approach similar to my described one. For completeness, here I explain where I was wrong:

I assumed the expected maximum of throws would be 1-1/(n+1), which is correct, as simulated by the following script: 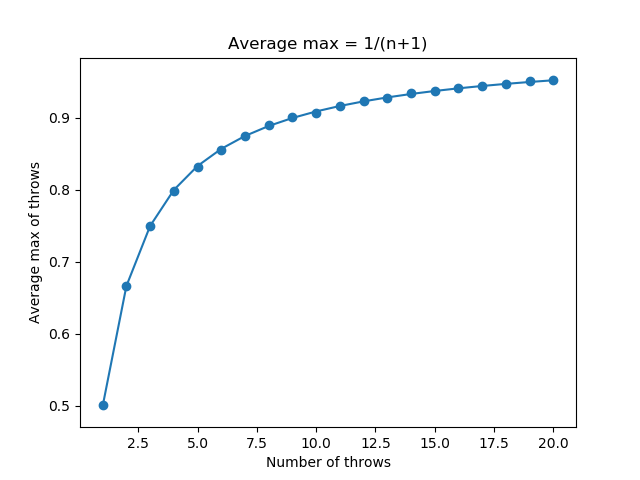 Here, just for illustrative purposes, I show how my formula is unable to accurately fit the median of maxima: 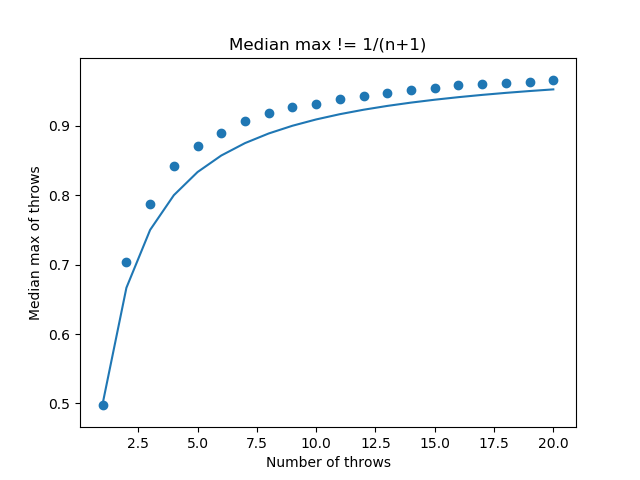 The goal is to find a constant $c$ such that

This probability can be found in terms of $c$, $n$ and $m$ as follows.

Setting this equal to $1/2$ and solving for $c$ yields

I don't believe that a linear scaling factor will equalize the odds, or at least I cannot determine one. However, there is a power factor that can.

If you raise player-A's score to the $\frac{3}{7}$ you should have a fair game. Obviously, since scores are between 0 and 1, raising it to a power of between 0 and 1 (not inclusive) will actually increase it.

I'd like to try to put pieces of comments and answers together into a simulation, and into a plan for an analytic solution.

This what I got: 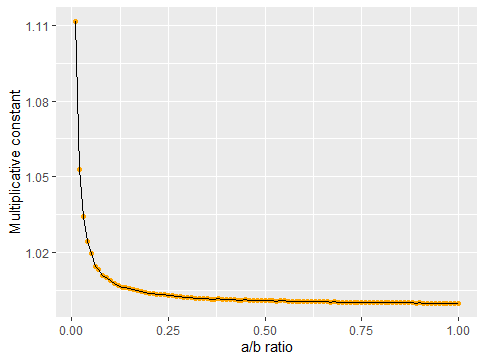 For the dice I assumed a uniform distribution between 0 and 1.

If we take the same ratio the expected value for the multiplicative constant is the same. I tested with a ratio of $0.5$ timing $a$ and $b$ up to a factor of 2000. Here the results as scatter plot and density distribution 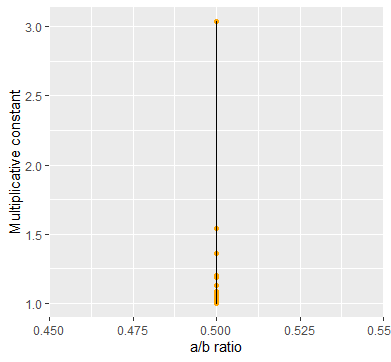 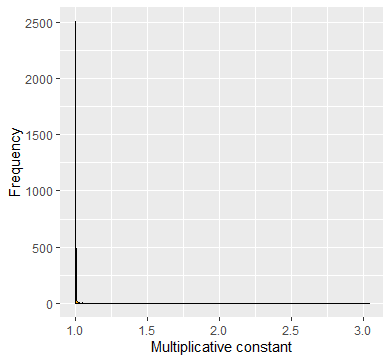 6
Probability of winning a tournament
8
Relevancy of order statistics to the roll-and-keep dice mechanic?
12
If a tennis match was a single large set, how many games would give the same accuracy?
3
Proof of Algebraic Formula for the Sum of Two-Dice Toss as a Convolution
3
Probability of the maximum of n dice rolls being equal to k
4
Uniform random variables and optimal strategy
0
Distribution for difference in scores for a game
16
Expected rolls to roll every number on a dice an odd number of times
9
What are the chances rolling 6, 6-sided dice that there will be a 6?
3
Risk (Strategy Game) winning probabilities and expected troops lost