Omitted Variables and their consequences for other variables

I'll assume away the intercept term for simplicity of exposition, without loss of generality. Writing out the expression for $\mathbb{E}\hat{\beta}$ gives us:

Under the assumptions of the question, $\mathbb{E}X^Te$ can be written as $(\theta,0)$, where $\theta$ is a function of the nonzero covariance between $x_1$ and $e$. Substituting gives us:

that produces the following histogram: 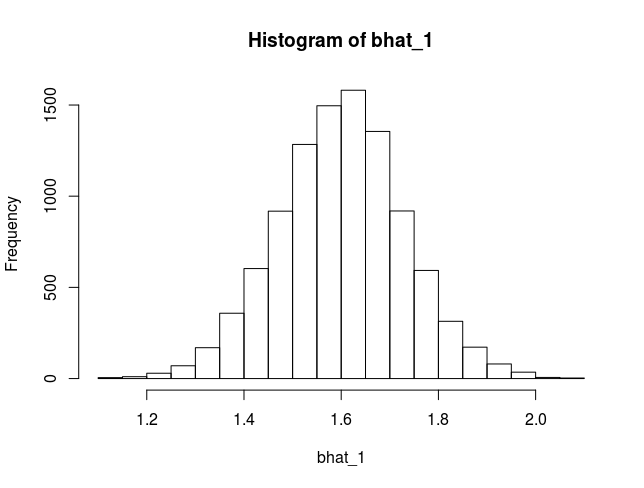 Here's what happens for any number of predictors and omitted variables. The answer ends up similar to what @jbowman (+1) showed for two predictors (one correlated with omitted variables and one not). Since I'd already started writing this, I'll post it in case it's useful to see another approach.

where $w \in \mathbb{R}^p$ and $v \in \mathbb{R}^q$ are the true coefficients, and $\epsilon$ is a random vector representing i.i.d. Gaussian noise with mean zero and variance $\sigma^2$.

The bias is a vector containing the expected difference between the estimated and true coefficients (see derivation below):

For predictors uncorrelated with the omitted variables

Suppose the predictors are partitioned as $X = [X_u, X_c]$, where $X_u$ contains columns uncorrelated with all omitted variables and $X_c$ contains columns correlated with at least one omitted variable. So, $X_u^T Z = \mathbf{0}$ and $X_c^T Z \ne \mathbf{0}$. Similarly, suppose the bias is partitioned into subvectors $\text{bias}_u$ (for predictors in $X_u$) and $\text{bias}_c$ (for predictors in $X_c$). Rewrite the preceding equation in the partitioned form:

Break this into two systems:

$\text{bias}_c$ is nonzero, since assuming it's zero leads to a contradiction, given our assumptions. This recapitulates the standard statement about omitted variable bias.

Therefore, coefficients for predictors in $X_u$ have zero bias if and only if $X_u$ and $X_c$ are uncorrelated:

Derivation of the bias

The bias is the expected difference between the estimated and true coefficients, where the expectation is taken w.r.t. $\epsilon$:

Line 2 substitutes in the expression for $\hat{w}$. Line 3 substitutes the true model in for $y$. Line 4 is an algebraic simplification. Line 5 uses linearity of expectation. Since noise has zero mean and is uncorrelated with the predictors, the expectation in the last term is zero, giving line 6.

Not the answer you're looking for? Browse other questions tagged least-squares endogeneity or ask your own question.

4
Estimated bias due to endogeneity, formula in Adda et al (2011)
3
Proof that omitted variable bias may lead to endogeneity
5
Bad Controls and Omitted Variables
3
Is it true that if one coefficient in a linear model is endogenous, then any individual coefficient will be inconsistent?
1
OLS Population Orthogonality Condition Proof
3
Exogeneity Assumption within or across observations
0
What control variables do we need for IV regression?