How to interpret this SPSS output table? [closed] 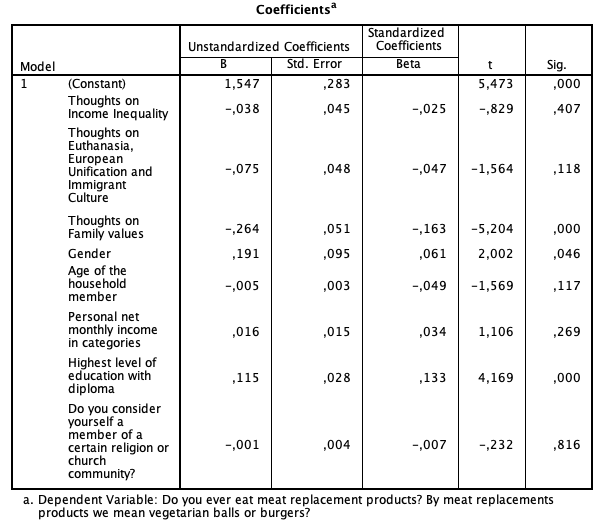 How should I interpret the following results? My thesis takes a long at the underlying values of political preference and the consumption quantities of meat-replacements products (such as vegetarian burgers) to see if any assumptions can be made about the relationship between these two variables. Thoughts on income inequality is defined as a socio-economic left-right meausure, while a 'liberal-conservative' measure is measured by 'thought on euthanasia, european unification and immigrant culture' and 'thoughts on family values'. The rest are control variables. I don't exactly know how to explain the significance levels for each variable in terms of their relationship with meat-replacement quantities.

I hope anyone is able to help.

If I understood you correctly, your response variable $y$ measures consumption quantities of meat-replacements products, and you are trying to study the relation between this variable and political preferences measured as "Thoughts on income inequality", "Thoughts on family" etc. You have performed a multiple linear regression model, and obtained the following equation: $$\hat y_i = \hat\beta_0 + \hat\beta_1x_{i1} + \ldots + \hat\beta_px_{ip}$$

The first column in the table gives you the estimates for the parameters of the model. This means, applied to your data, that you will predict the consumption quantities of meat-replacements products as

Loosely speaking, the second column measures a margin error on your estimation of the $\beta$ coefficients that will be used in columns 4 and 5.

Finally, the 4º and 5º columns refer to a hypothesis test for the coefficients. For each coefficient, you perform the test:

Now, regarding the variables that appear as not statistically significant, this may be due to 2 possible reasons:

The variables that appear as "not significant" may display this behaviour for one of two reasons:

In order to detect which is the case for your not significant variables, the usual procedure is to perform univariate regression models. This means, to define a model that tries to explain consumption quantities of meat-replacements products as a function of just one of your variables at a time. If any of the variables is individually significant but non-significant in the multivariate model, is because of the case (2). If the variable is individually and in the multivariate model not significant, then you are in case (1).

Not the answer you're looking for? Browse other questions tagged regression interpretation model linear or ask your own question.