How to fit a distribution with an “10 and more” category at the bottom?

I want to fit a distribution to some data to sample from it in a subsequent simulation. There are I got a dataset that looks somehwat like this:

Every entry of "num" refers to a non-negative discrete observation, except the last one (in this case num=10) which is a category of "10 or more". The column "value" refers to the frequency of that observation. The data is extremly right skewed, but an exponential distribution seems to be a decent fit if you ignore the last row of the data. (note: this isn't the real data)

I happen to know the maximum value that can occur, let's say that one is 500. So in other words I know the area under the curve between 10 and 500, which is the frequency of the last category, and have exact values before that. How do I fit an exponential (or other fitting) distribution to this data that satisfies these constraints?

So far I only managed to fit an exponential distribution to the first 9 columns and predict values for the subsequent values of 10-500 like this:

This does work somewhat, but the area under the curve between 9 and 500 obviously is not correct (e.g. it is not equal to 110). Another solution I implemented is fitting a triangle, which does satisfy the area under curve and the maximum value, but the distribution would be far off from the prior distribution of values.

Edit: Is it possible to fit a distribution that has 112 (the frequency of "10 and more") as the area under the curve between the values 9 and 500, which roughly follows the same distribution as the values before it?

The data you showed seem to be quite well modelled by a geometric distribution, expect by the truncation (which seems to be expected). 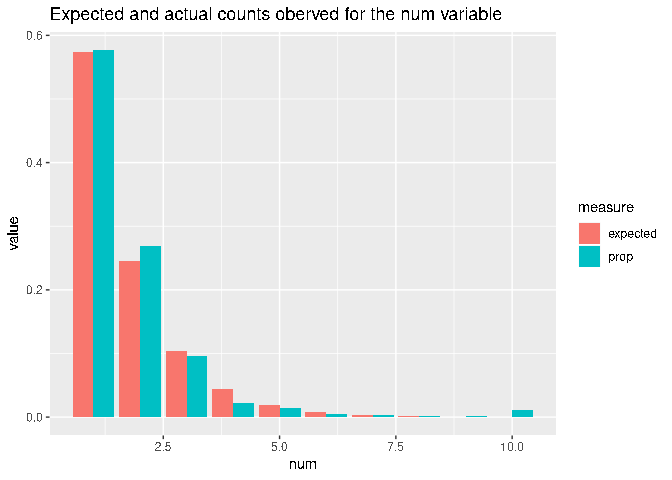 Not the answer you're looking for? Browse other questions tagged r exponential curve-fitting censoring or ask your own question.

2
Fit distributions with glm
4
Fluctuations in hazard function at high (x) values
1
Exponential distribution for a dataset with a given minimum value
5
How can I convert a lognormal distribution into a normal distribution?
0
How to find the critical value $c$ that the left-hand side of $c$ has probability 0.95 under the empirical distribution curve?
2
Interpretting the p-value when inverting the null hypothesis