How can I identify an unfamiliar cumulative distribution function?

I have 116 Bessel-corrected sample variances (average of squared distances from sample mean), each from a sample of three measurements. All measurements were done using the same method.

I had predicted that the empirical cumulative distribution would match that of a scaled chi-squared curve with 2 degrees of freedom, so I tried plotting them on the same graph.

My intention was that both curves would represent distributions with the mean at the population variance (of the original, normal distribution).

To my eyes, the yellow line seems to have a mostly-consistent shape of its own, distinct from both the blue and red lines, but I have no idea how to identify what CDF that is. My knowledge of CDFs is shallow and so I could also be imagining something to hold import that holds none.

In Image 2 below, remembering the PDF to be the slope of the CDF, I have approximated the PDF of the samples' distribution by dy/dx using adjacent points (so for point 2, using $\frac{y_3 - y_1}{x_3 - x_1}). The y-axis is logarithmic to better include all points shown. I again am concerned by that the shape does not seem to match the 2-degrees-of-freedom curve and not knowing why.

[I have somewhat rewritten/redone the above question before reading welcome offered information in more detail!] 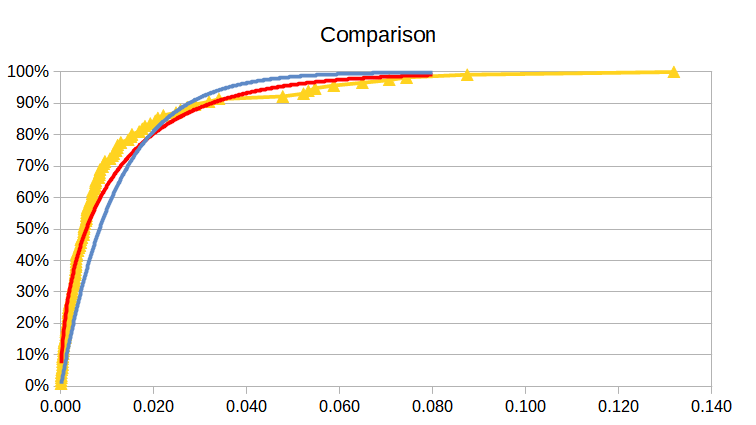 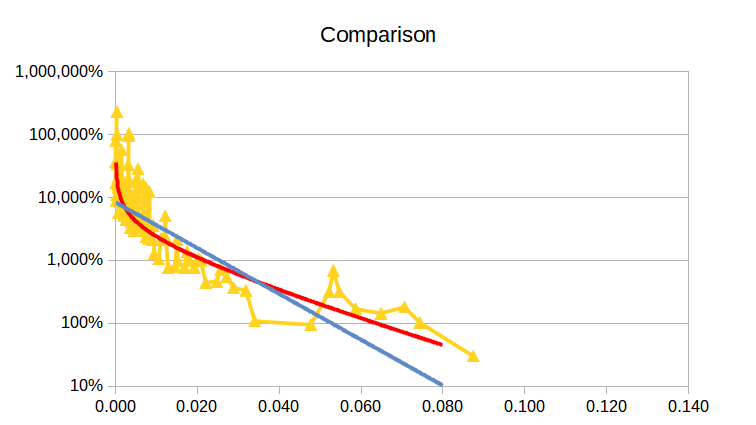 320
How to understand degrees of freedom?
1
Why are the MLE and MMSE corrections for sample variances different?