In this lecture about statistical mechanics, page $10$, the author said that for a peaked distribution, like the one below, 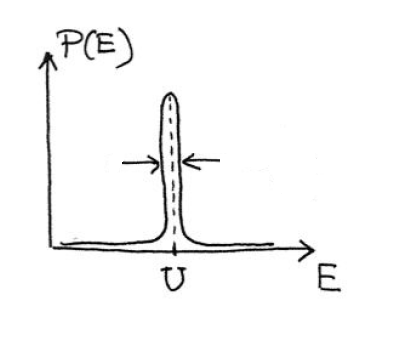 the width of the peak is proportional to $\frac{\sigma}{\mu}$, where $\mu$ ($\textrm{U}$ in the above figure) is the mean of the distribution, and $\sigma$ its variance.

To exactly quote the author,

the distribution of the system's total energy $E$ is very sharply peaked around its mean $\textrm{U} = \langle E\rangle$: the width of this peak is $\sim \Delta E _{rms}/\textrm{U},$

No reason or hint was given as to why this proportionality holds. As I understand, $\frac{\sigma}{\mu}$ is used to compare the relative variance of two distributions, but I don't really see how it is linked to the width of a narrow distribution like the one above.

It is unclear to me how you are getting "proportionality" from the stated assertion in those notes. The notes appear only to refer to a single distribution, rather than a parameterised family of distributions, so it is not entirely clear to me that this is an assertion of "proportionality". In any case, to understand the coefficient of variation, it is worth noting that both the expected value and standard deviation of a random variable are proportionate to the scale of that variable.

Not the answer you're looking for? Browse other questions tagged distributions coefficient-of-variation or ask your own question.

1
How do you derive the conditional variance for $s^2$, the OLS estimator of $\sigma^2$?
4
Variance of the maximum likelihood estimator of Rayleigh Distribution
1
Coefficient of variation question?
1
Empirical probability and Dirac distribution
3
On finding the asymptotic distribution of the sample variance using the delta method
6
Variance of Normal Order Statistics