Relationship between change in one variable in relation to another

I have run some simple t-test that show significance in the increase in the number of visitors. But I feel this only half answer my question. It could be that the visitors just increased. I have checked for seasonality and that is not an issue. A correlation analyses on the data shows a correlation between .25. Is there a better analysis to do or a transformation I should make (maybe log)?

Here are the visitors by week:

and here is the variable that has increased. I am trying to determine if the increase at the end of Sept has led to increased visits.

It seems to me that your question is more contextual than mathematical. If I understand your data correctly, you are measuring the number of visitors, we'll call this $V$ and measuring some second variable we'll call $X$. I'm not sure where you're running a t-test here, because a t-test requires a categorical variable, which I do not see in your data. However, a regression of $V = \beta X$ seems appropriete here. Are you meaning to refer to the F-test & corresponding p-value on a regression?

All that being said, based on these two variables, you question seems to be "is $X$ causing an increase in $V$" or is the increase in $V$ causing $X$, or, alternativly, is some third variable casuing an increase in both $V$ and $X$. You can't solve discern this mathematically. You can investigate the relationship in the context they appear, but that's really it.

As to your question about transformation, your variable is not linear, but more close to exponential, so a log transformation may be appropriate. You can use the BoxCox method to check if log is the correct transformation or if perhaps a square-root or some other power is better. Log is a pretty safe bet though.

I took your 29 values 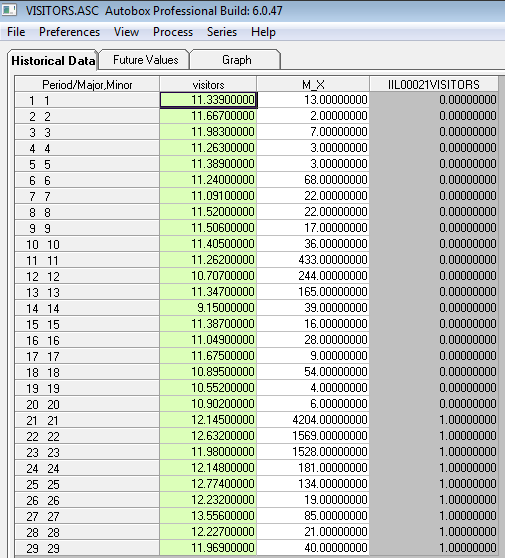 and used my tool of choice , which I have helped to develop.

In order to assess the statistical importance of your candidate predictor variable X , one needs to address the question of unusual activity in either the X or the Y variable.

The hypothesis that a possibly change in X at period 21 is dealt with by introducing a candidate level shift series (IL00021VISITORS. The "regression data set" then looks like this

Estimating a robust regression where anomalies (pulses , level shifts ) are allowed to be identified and incorporated yielded two pulses ( period 14 & period 27 ) AND a level shift down at period 18 down for 3 periods.

No power transform was needed as the model's residuals were homogeneous over time .

The Actual/Fit and Forecast is here 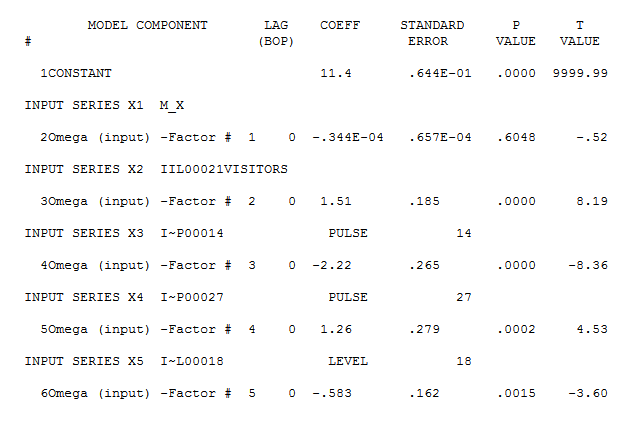 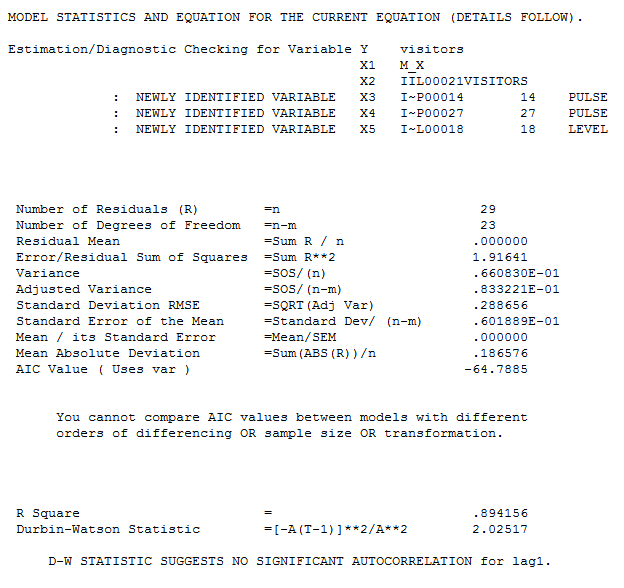 The conclusion is that there is a significant change in Y starting at period 21 which coincides with changes in the user-suggested variable X as supported by (II00021VISITORS) . This could be anecdotal as no designed experiment was conducted and there could be a (lurking) third variable as @Tanner Phillips pointed out.

Notice that X itself (the observed # of visitors) was not found to be significant thus it is the change in X to a new level that "caused" the change in Y. This variable (IIL00021VISITORS) was a user-suggested variable based upon the hypothesis that he is trying to test that a significant pervasive effect took place at period 21.

AUTOBOX identified a Level Shift (at or about period 22) using Intervention Detection procedures espoused here and elsewhere http://docplayer.net/12080848-Outliers-level-shifts-and-variance-changes-in-time-series.html . while adjusting for two anomalies (period 14 and period 27) 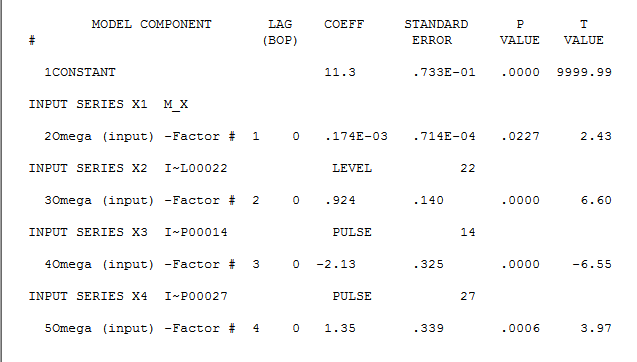 with the following visual

with residual plot here (not yet adjusted for pulses or anything)

In this manner the DATA suggests the hypothesis that should be most rejected i.e. the hypothesis that nothing happend in the period 22-29 or equivalently no special effect for period 22-29 thus data driving hypothesis as what had been assumed to be no latent deterministic effect anywhere was soundly rejected while the first analysis (reflected on/criticized by @whuber ) is a HUMAN suggested hypothesis ( after studying the plots and the data and/or being aware due to domain knowledge that a fundamental change might have occurred at period 21 through 29)

This second approach is true Exploratory Data Analysis (EDA) when applied to time series data where hypothesis are found.discovered by a search process sometimes referred to as machine intelligence by examining the residuals for "structure" ( at least by me ! )

Here is the plot of tentative residuals that the software "looked at i.e. examined " to mechanistically generate the level shift hypothesis. 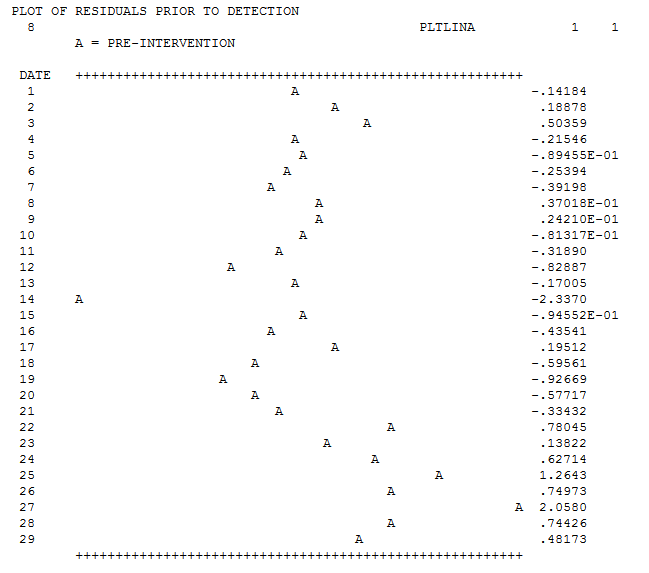 For those who winder why the level/step shift was not found at period 21 ... the (imperfect due to grouping rules) classification strategy found that period 21 was closer to the first 20 than it was to the last 8 given that pulses had yet to be identified and the respective values at 14 & 27 were "normal" and to be believed as part of the underlying process.

Not the answer you're looking for? Browse other questions tagged correlation t-test causality count-data or ask your own question.

2
Investigate correlation conditional on a threshold

8
Understanding productivity or expenses over time without falling victim to stochastic interruptions
1
Is this a valid approach to testing a hypothesis about the relationship between two variables?
2
Attempting to investigate a relationship between one variable and another that has three possible values
4
Is it OK to calculate correlation between $x$ and $\frac{y}{x}$?
2
Bidirectional effects?
2
Contrasting effects on correlation between two variables with increase or change in dataset
0
Hypothesis testing control vs treatment when the outcome tends to vary over time
0
Correlation, Multiple Linear Regression, P Values in R
2
Hypothesis testing intervention analysis - pre vs post with expected seasonal change