Let $X$ and $Y$ be two random variables (or vectors) with continuous and "smooth enough" joint distribution. Assume that the two conditional distributions $X|Y=y$ and $Y|X=x$ are log-concave for all $x$ and $y$.

This question arises in Bayesian inference, $X$ and $Y$ being then parameters and their distributions being conditional to the observed data say $\mathbf{Z}$. The conditional log-concavity can arise from partial conjugacy, as is the case for a normal distribution with normal and gamma prior for the mean and precision. The rephrased question then is: if the full conditionals are log-concave, is the posterior unimodal or, at least, are the marginal posteriors unimodal?

Unimodal, log-concave marginals do not imply a unimodal joint distribution.

As an example, consider uniform marginals on the interval $[0,1].$ These are (barely) log-concave. Here is a series of plots of the densities of joint distributions having these marginals.

Clearly they are multimodal.

The method of construction is to begin with the uniform distribution on the interval $[1/2,1]$ with density $f=2$ on that interval (and zero elsewhere). This is not differentiable at $1/2.$ To make it so, a sufficiently differentiable density $p$ supported on $(1/2-\epsilon/2, 1/2+\epsilon/2)$ for small $\epsilon$ (here equal to $1/4$) was integrated to form an approximate version of $f$ given by 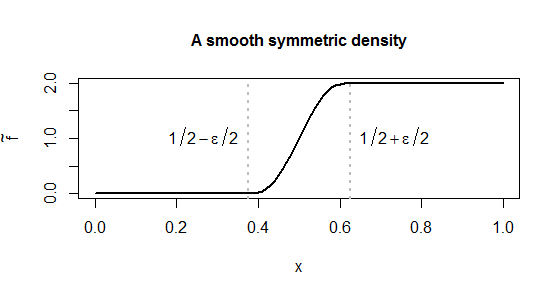 From this the joint distribution in panel 1 was constructed via

for a non-negative constant $C$ and then normalized to integrate to unity. ($C$ was introduced in case you want a density that is everywhere nonzero. $C=1$ was used for the figure; after normalization this resulted in a minimum density of $(1+C)/2=1/2.$)

At the "seams" along the lines $x=1/2$ and $y=1/2$ this tessellated density is constant (provided $\epsilon \lt 1$) and therefore remains as differentiable as $g$ itself.

Not the answer you're looking for? Browse other questions tagged distributions bayesian conditional-probability mode or ask your own question.