I'm looking for some references that explain step by step how to model logistic regression to longitudinal data (repeated measurements) in R. I know that I can use the lme4 package and the function glmer for generalized linear mixed models, and I use it to add random effects. But I've read some stuff and sometimes people add quadratic terms and multiply and sometimes they don't. Can someone clarify me on this?

For example, on the book "Applied Longitudinal Analysis by Fitzmaurice", in chapter 14.7, he models the logistic regression for a dataset like this:

This is the type of questions that I'm having concerning the R code on this matter. I can't find many literature with R on logistic regression for longitudinal data, and this all very confusing. Can someone explain me when to use quadratic terms, or multiply/add them? Or recommend me a reference.

I also found this topic but it didn't help much.

The reason to include polynomial terms of a variable (e.g., time) into your model is when the relationship between the (transformed) mean of your outcome and this variable in nonlinear. In your particular case, and because you fit a mixed-effects logistic regression, you postulate that the log odds of your dichotomous/binomial outcome are related nonlinearly with the time variable.

The question of whether it is required to include such a term into your model depends on the dataset. I.e., for some outcomes, a simple linear relationship between the log odds and time may be adequate, whereas, in other datasets, the relationship may be nonlinear.

Including the interaction with treatment in the model means that the log odds for the different treatment groups have different nonlinear profiles over time.

Finally, to model nonlinear relationships splines are better than polynomials. 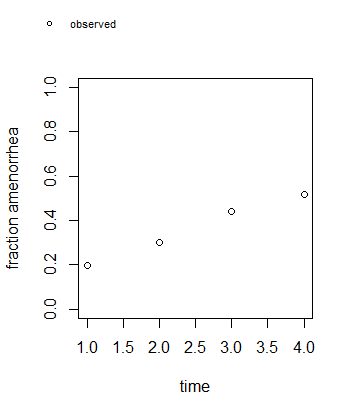 With a typical simple logistic regression that only includes a linear function of time (note that this linear function is wrapped inside a non-linear link function) the fraction/probability of the binary outcome is modeled as a logistic curve: 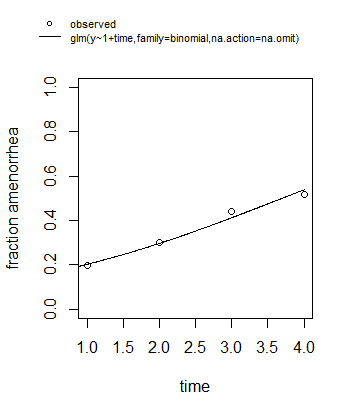 More variance as function of time by adding quadratic term

In the above example the logistic curve is being fitted by stretching and shifting. By adding a quadratic term the change in time may be expressed with more flexibility. This will improve the fit. 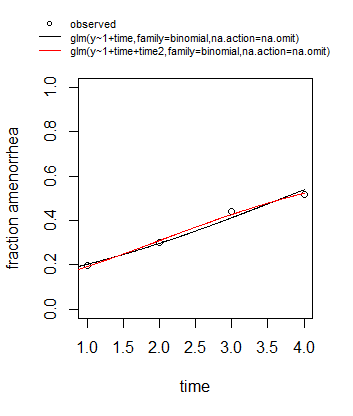 The effect might be a bit difficult to see because both the curves are not linear (because they are wrapped in the link function). However when we plot the log odds then it may look more clear: 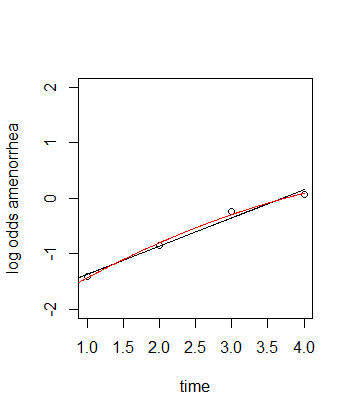 Multiply with other factors

multiply and sometimes they don't 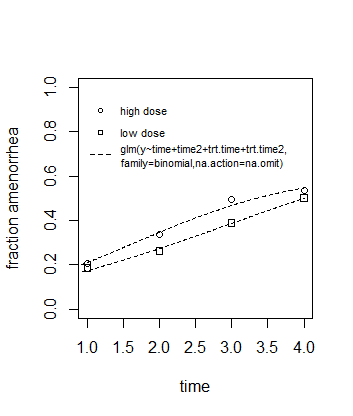 Note that the multiplication trt * time is done with a variable trt that either has the value 0 or 1. Sometimes these models use cross terms with variables that have multiple values in which case the multiplication must be done for each variable separately (see dumy-coding).

Can someone explain me when to use quadratic terms, or multiply/add them? Or recommend me a reference.

The book "Applied Longitudinal Analysis by Fitzmaurice", that you refer to explains it. See in the example R-code where different models are compared.

the AIC and BIC are basically the same

AIC, BIC and F-test are various test to compare it. In the example from the book they seem to use a F-test. Yes AIC and BIC might be basically the same but the quadratic model does provide a better estimate (the AIC and BIC look the same because the values are both so large, but the difference in log likelihood, about 6, is relatively large).

You should be very careful with the interpretation. These tests may give small p-values, which means that you can predict the values for the four individual times very well, but the model may still be highly biased for other values (and interpolation and extrapolation may be completely/extremely wrong).

In this case, with just four time points, I would personally not model the fraction amenorrhea as a function of time. Or at least I would not apply a function that is more complex than a linear function, and if I would like to include more flexibility as function of time then I would turn the time variable into a categorical variable. The use of a quadratic function for just four time points is a bit meaningless. It will create a better fit, but it is just over-fitting and one should not interpret the model as correct such that one can apply interpolation or extrapolation.

In the above I used the glm function instead of the glmer function because the fit by glmer is less intuitive (it will not overlap with the fraction of amenorrhea because the random offset for the different individual, which may have one or more NA values, will change the fit a lot such that the predicted means will not overlap a lot with the observed means)

Not the answer you're looking for? Browse other questions tagged r logistic mixed-model lme4-nlme panel-data or ask your own question.

6
Adding a quadratic term: should I use the squared original (and not the squared standardized?)
2
Warning message with non-integers in glmer
1
glmer with binary response variable: how to select fixed effects?
0
Binomial glmer with data between 0-1, not count data, not normal proportion
1
Why does lm() estimate different coefficients for polynomial or quadratic terms?
0
Modeling Serial Values with Mixed-Effects Logistic Regression