The ergodicity problem in economics

Disclaimer: I'm not well read in economics or statitics for that matter but am mathematically literate (PhD in Mech Eng)

Recently I was sent a paper from Nature Physics, "The ergodicity problem in economics" by Ole Peters.

I was discussing this with a friend who also isn't an economist but has more than just a passing interest.

He made the claim that in figure 2 the graph is wrong i.e. that the expectation values (the blue line) are wrong in that they should be plotting a plot of 0.9^(number of rounds/2), which would have a negative slope (he derives this from equation 2 in the paper. He then goes on to say that this renders the paper garbage.

I'm not sure of my friends derivation but if you run the model proposed in equation 2 of the paper then you do indeed get an ever decreasng return. I used the following Python code to run the model... 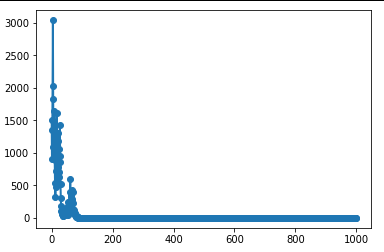 This is clearly not what we're seeing in figure 2 of the paper... 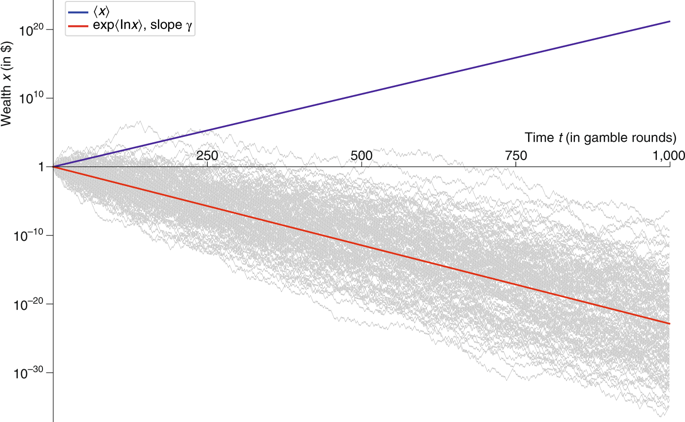 Here the blue line is the accumulated wealth (log scale on the y axis) v toss number. It is increasing!!!

Now obvioulsy this paper was published in Nature Physics which currently has an impact factor of 22.8 so I find it hard to believe that this would have slipped past peer review.

So my question, is the paper wrong or is my friend?

If your friend is talking about the expected wealth he's wrong.

The point of the figure is that the expected value of gambling is very much not indicative of what happens typically for longer trajectories, so your simulation just backs that up.

We can already see this pattern if we consider gambling twice. With probability one half, we gain 50% in value, the other outcome is losing 40%. Starting with wealth $1$ if we win twice, we have $2.25$. But the other possible outcomes are $0.9$ if we win once and $0.36$ if we lose twice. The expected value is $1.1025$, larger than $1$. We lose money 3 times out of 4, so typically we lose, but because we win big enough if we do win, the expected change in wealth is positive.

0
Apprehension in a solved problem from Feller
9
Law of total expecation/tower rule: Why must both random variables come from the same probability space?
1
A problem in conditional expectations
15
The frog problem with negative steps
1
elementary coin-toss problem
2
Computing probability distributions in the two envelope problem
19
100-sided dice roll problem
2
What is the expectation of the exponential distribution multiplied by indicator function?