If I repeat this process, I can plot the distribution of distances that are obtained through this process.

When $N\to \infty$, what does this distribution approach?

When I simulate this in Mathematica, it appears as though it approaches an exponential function. And if the list was 1 element long, then I believe this would exactly follow an exponential distribution.

Looking at the wikipedia for exponential distributions, I can see that there is some discussion on the topic: 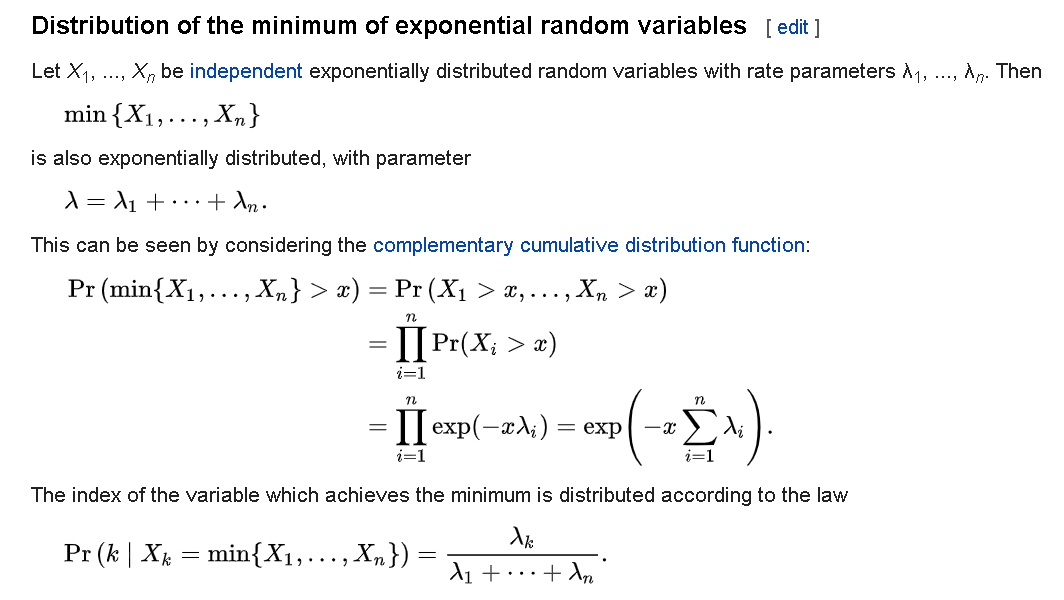 But I'm having trouble interpreting what they are saying here. What is "k" here? Is my case what they are describing here in the limit where $n\to \infty$?

EDIT: After a very helpful helpful intuitive answer by Bayequentist, I understand now that the behavior as $N \to \infty$ should approach a dirac delta function. But I'd still like to understand why my data (which is like the minimum of a bunch of exponential distributions), appears to also be exponential. And is there a way that I can figure out what this distribution is exactly (for large but finite N)?

Here is a picture of what the such a distribution looks like for large but finite N: 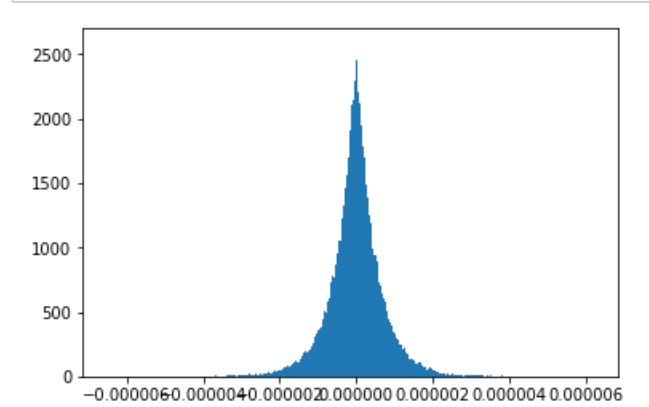 EDIT2: Here's some python code to simulate these distributions:

But your question is slightly more complicated, as you are interested in the signed distance to the nearest value above or below. As your Wikipedia link shows, the minimum of two i.i.d. exponential random variables with rate $\lambda$ is an exponential random variable with rate $2\lambda$. So you need to change the approximation to the density to reflect both the doubled rate and the possibility of negative values of $d$. The approximation actually becomes a Laplace distribution with $$f(d) \approx n e^{-2n|d|}$$ remembering this is for large $n$ and small $d$ (in particular the true density is $0$ unless $-\frac12 \lt d \lt \frac12$). As $n$ increases, this concentrates almost all the density at $0$ as in Bayequentist's response of the limit of a Dirac delta distribution

With $n=10^6$ the approximation to the density would look like this, matching the shape of your simulated data. 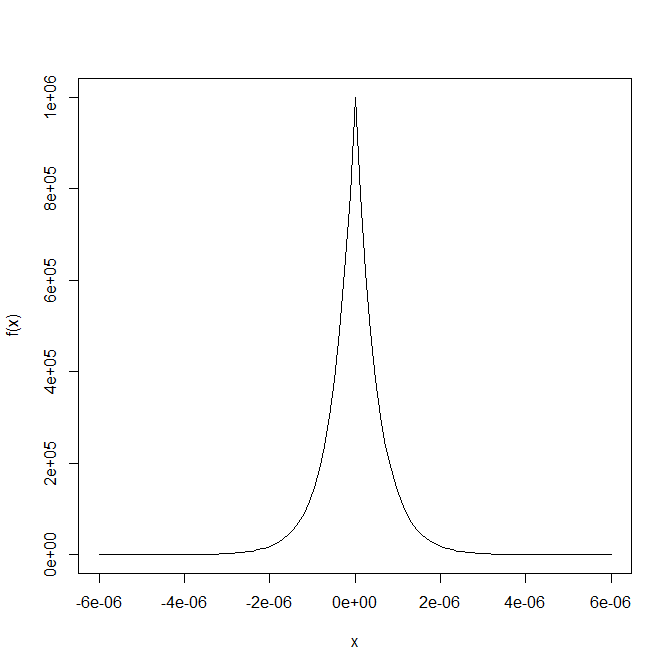 Here are some simulations: 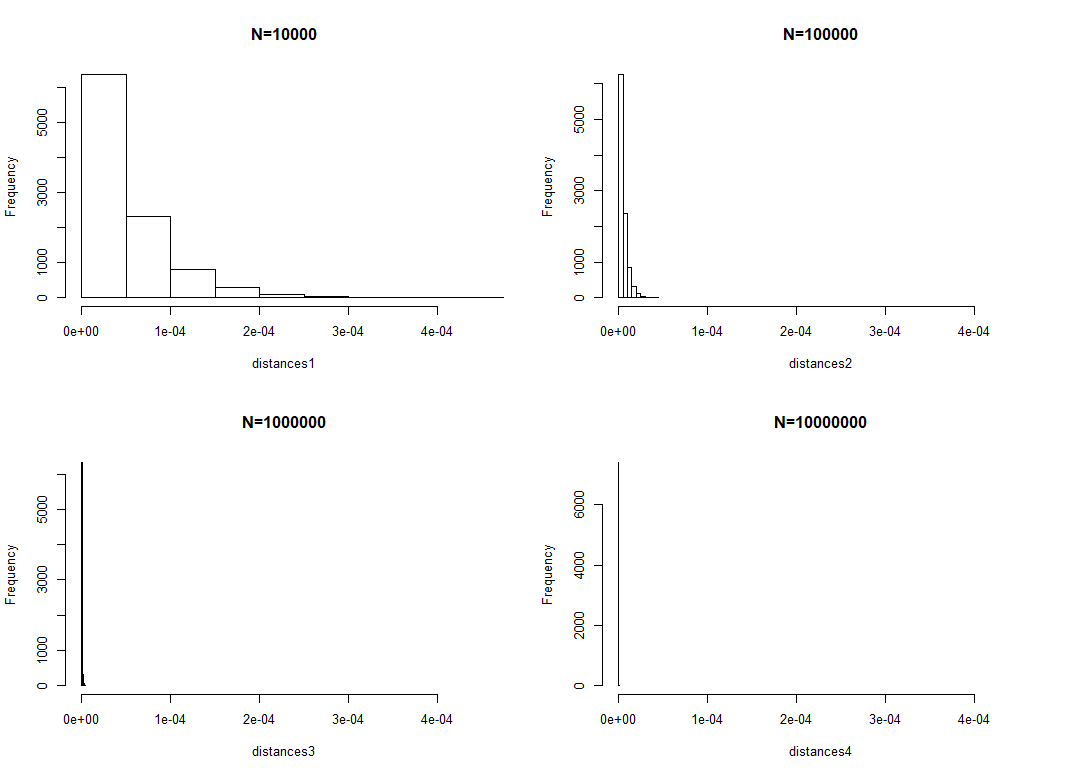 is there a way that I can figure out what this distribution is exactly (for large but finite N)?

Distance is the absolute value of the difference which has pdf say $f(x)$:

Repeating the exercise $n$ times and taking the minimum distance is equivalent to finding the minimum $(1^{\text{st}})$ order statistic wrt the parent pdf $f(x)$, which is given by:

where I am using the OrderStat function from the mathStatica package for Mathematica to automate the nitty gritties, and where the domain of support is (0,1). The solution has a Power Function distribution with pdf of form $g(x) = a x^{a-1}$.

The following diagram compares a plot of the exact pdf of the minimum distance just derived $g(x)$ (red dashed curve) ... to a Monte Carlo simulation (squiggly blue curve), when the sample size is $n=10$: 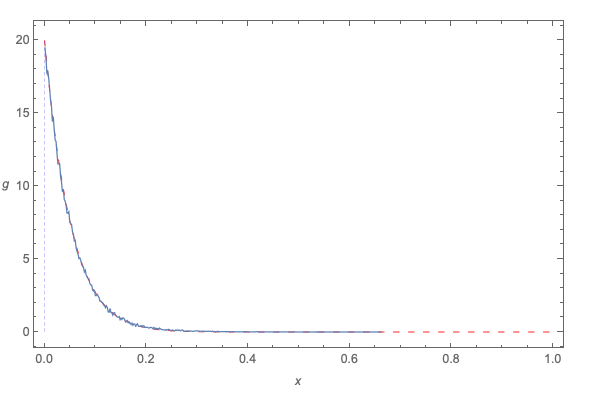 Simulation: As you are using Mathematica for simulation, here is the code I am using for the data simulation in Mathematica:

Not the answer you're looking for? Browse other questions tagged probability distributions density-function exponential-distribution or ask your own question.

0
What is the PDF describing the minimum distance in time between any event and the remaining N-1 events? (for a “process”-making events at fixed rate)