How could I statistically measure the impact of an external event in a time series?

I have a timeseries of monthly sales data, by account for a single product. It looks something like:

I'm trying to quantify the impact of a new marketing campaign in June. Some of the accounts have high historical volume, others have low. I've looked into ARIMA models, but not sure that this is the right application of those, given that I know exactly when the event occured.

My current thinking is to just look at average order volume before June and after June and to run a t-test to determine if the means are not significantly different (by account). My concern is that this only accounts for the means of the same data before and after June, and might understate the importance of the data immediately around the event.

Any suggestions on other mathematical tools I can use to statically quantify the impact of a marketing campaign on product volume sales?

t tests require not only constant variance BUT independent observations ...thus they are not recommended/appropriate for time series data. I took ACCOUNT3 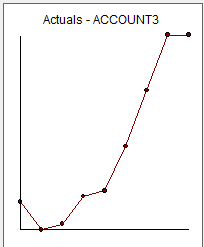 and analyzed it with the intent of not only dealing with memory (arima) but latent deterministic structure ... thus empirically detecting the fixed effects that might be present . 9 data points is a challenge but two determimistic variables were identified , one being a pulse at period 6 and the the second being a level shift at period 6.

This suggests that arima modelling alone would be insufficient/ineffective/less useful as your series is effected by an exogenous effects.

All model are wrong but this seems possibly useful

until more data is collected.

At this juncture the memory component is (0,0,0)(0.0,0)12 . Since your data does not have a memory component , simple regression ( with the right candidate series/hypothesis ) is appropriate.

More on Intervention Detection can be found here http://docplayer.net/12080848-Outliers-level-shifts-and-variance-changes-in-time-series.html.

If you had simply proposed a permanent i.e. step/level shift at period 6 ...your result would not have been that dissimilar ... in this case !.

In summary you are in the right direction using ARIMA model BUT you also need to incorporate potentially useful deterministic structure to create a possible hybrid model.

Not the answer you're looking for? Browse other questions tagged time-series arima intervention-analysis or ask your own question.

6
Statistical test for a significant change in time series (sales) trend after policy change
12
Developing an appropriate time series model to predict sales based on past month record
5
ARIMA, adjustments and intervention analysis
0
How do I measure impact of an intervention of time series without historical data of the same series?
2
How to statistically determine if there was sales lift?
2
Estimate the time series like an event was never happened