Suppose I have 5 possible events which either happened or did not happen in the preceding 10 time periods. How do I figure out how probable any event is in the 11th period?

Assume the outcome of each trial is a coin flip that only depends on some constant, unknown bias $\theta$ which you are trying to infer so you can predict the next outcome after seeing some data. Imagine that $\theta$ itself was drawn from some prior distribution, which we'll assume to be a Beta distribution with paramaters $a,b$, depicted graphically below 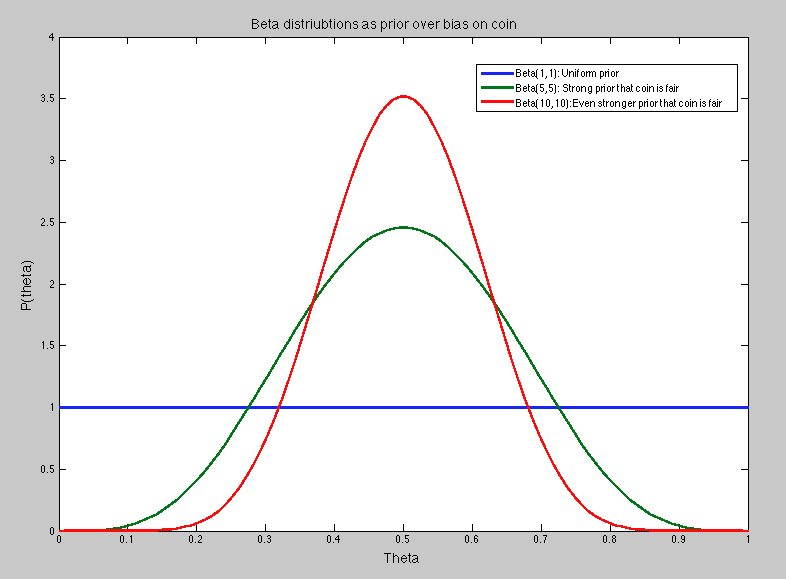 The predictive distribution in the case of the Beta-Binomial model is simply the expectation (the mean) of your belief about $\theta$, which for $Beta(a,b)$ is $\frac{a}{a+b}$. So for example if you have no reason to assume a priori that any value b/t 0 and 1 is more likely than any other, you could set $a=b=1$ so so that your belief was totally uniform(see plot). Then your prediction is $\frac{1}{1+1} = 0.5$.

Say that you observe 10 trials with 8 successes and 2 failures. The posterior distribution is then $Beta(a+8,b+2)$. Notice that the paramaters $a,b$ of your $Beta(a,b)$ prior can be interpreted as "psuedo-observations", where $a$ is the number heads and $b$ the number of tails that you have in effect hallucinated, since they're treated the same as actual observations are in your posterior belief.

So you can easily calculate the predicted outcome for your examples above, but you have to assume some parameter values $a$ and $b$ for your prior. Then your prediction is simply $\frac{a+x}{a+b+N}$, where $x$ is the number of successes observed and $N$ is total number of trials.

Not the answer you're looking for? Browse other questions tagged probability bayesian or ask your own question.

6
Visualizing probability of event over time, based on epoch time
0
how to calculate the following conditional probability
1
Help with Bayesian priors
0
How to do Bayesian updating for a simple practical problem?
0
What is the likelihood that the first of N unlikely steps occurs in the first 1/Nth of the total time, given that all N steps succeed?
1
How does the probability of events change if an event does not occur
0
Adding probabilities of different Poisson distributions
1
Bayesian Inference & Determining the Prior