I am trying to develop my intuition about how to interpret an interaction between a time-varying predictor and time itself.

I have several years of routinely collected outcomes data from a drug and alcohol treatment service. I am interested in modeling the association the effect that amphetamine use has on Opioid use in clients enrolled in an Opiate Treatment Program.

there are four variables in the dataset,

Every client has outcomes data collected at commencement of treatment (i.e yearsFromStart = 0) but can have any number of follow-up measurements (from 1 to 11 in this dataset). In addition, there is no consistency to when follow-up measurements are made. it is also worth noting that every time frequency of opioid use is measured, frequency of amphetamine use is also measured.

Here is a sample of three clients' data in person-period (i.e. long) format 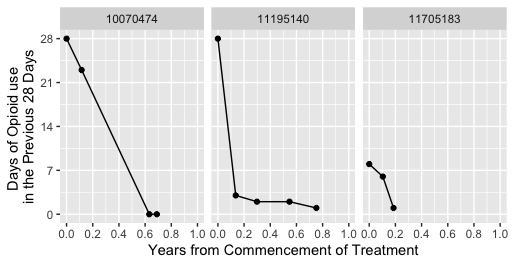 Now I want to model how amphetamine use predicts opioid use over the course of treatment. It is worth making clear that atsFactor is a time-varying predictor and I want to model its impact on frequency of opioid use, and how that impact changes the longer a client is in treatment. Therefore I chose a mixed-effects model with fixed effects yearsFromStart, atsFactor, and and the interaction between yearsFromStart and atsFactor. The model is a random slopes model with each client's trajectory of opioid use over time allowed to vary.

I used the lme() function in the nlme package in R. The model function looks like this

And this is the output of the model

Now here is my attempt at interpreting the model.

Is this the correct way to interpret a model where there is an interaction with a time-varying predictor and time?

I don't want to overinterpret these results so it's important to me that I understand the implications of the results correctly. 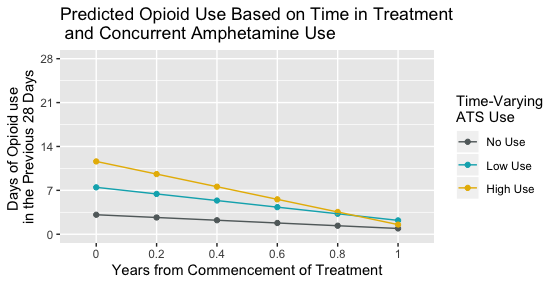 Now I am more used to interaction plots where there is an interaction between a time-invariant predictor and time, so that each line represents the average trajectory for some group where the group characteristic does not change, e.g. whether a person was male or female, whether a person's amphetamine use at baseline only was none, low or high. That makes sense to me.

Would it be better to remove the lines in that case and just have the dots only, like this? 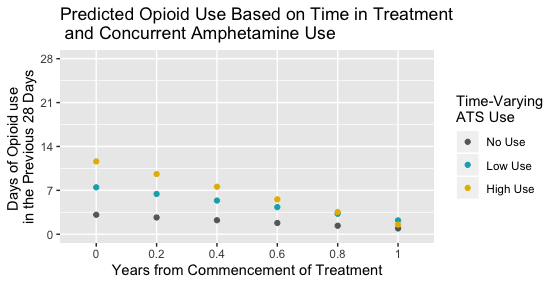 To me the lines imply some sense of continuity or consistency in amphetamine use over time, some kind of marginal opioid use trajectory for a person who represents an average participant of some kind.

Any help would be much appreciated. No one at my work has any experience with with models interacting time-varying coefficients with time.

It is much easier to think about and explain an interaction between time and a person characteristic that does not change over the course of the study. Hence in the comments, I asked about how much of the variation in asFactor was within versus between persons (pID) given that in the example data you provided, admittedly limited, asFactor values were the same within pID. I asked you to estimate a variance components model for asFactor (a model with no predictors other than the random structure specified) so that you could calculate an ICC for asFactor. Since asFactor was an ordinal variable with three levels, you had to use clmm() in the ordinal package to estimate this model.

In a generalized linear mixed model using a logit link function (bernoulli or ordered logistic), a level 1 residual variance is not estimated and is constant, making it not obvious how to calculate an ICC. However, if you think about the outcome of this model as an unobserved latent variable with thresholds, then it has a continuous response interpretation. The variance of the residual in this framework is $\frac{\pi^2}{3}$. This is not a necessary assumption of the model but is handy for calculating ICCs with such outcomes.

You reported that the pID variance from your clmm() model was 31.77, so the ICC =$\frac{31.77}{(31.77+\frac{\pi^2}{3})}$, which is roughly .90. That indicates that a huge fraction of the variance in asFactor is at the person level and thus, it is probably better conceived of as a person-level variable than as a time-varying variable. My suggestion is to calculate the person mean for asFactor, and you will likely find that most persons do not change values of asFactor over the study period. For those that do, they will have a non whole-number value for their person mean of asFactor. You could then create a 0/1 variable that indicates whether an individual changes on asFactor. These two person-level variables (mean_asFactor and chg_asFactor) in combination give you the information you are interested in and can be interacted with time to give you a sense of how much change in allOpiods depends on asFactor (time:mean_asFactor) and whether people change in their asFactor level (time:chg_asFactor). As before, you can use ggpredict()%>%plot() to visualize these interactions. This may or may not be exactly what you want, but it is an alternative route and seems justified given what you have learned about asFactor.

Not the answer you're looking for? Browse other questions tagged mixed-model interpretation panel-data time-varying-covariate or ask your own question.

18
Is it appropriate to use "time" as a causal variable in a DAG?
3
Interaction of Time-Varying Predictor and Time: How its inclusion changes the meaning of coefficients

2
Interaction of risk factor with age in survival model with age as time scale
0
Time varying covariates in longitudinal mixed effect models
5
Ways of modeling the same variable as both a time-invariant and time-varying predictor
3
Interaction of Time-Varying Predictor and Time: How its inclusion changes the meaning of coefficients
2
What's are some good way to report main effects in time*treatment models without a significant interaction?
5
Left censoring with time-varying covariates
0
Controlling for time elapsed between baseline and treatment