I'm trying to conduct a binary logistic regression to see how each feature of male crabs contributes to being selected by females. the dependent variable is being selected or not selected which is dichotomous and I have 4 independent variables. I originally had 5 variables but 3 of them have really high correlations so I removed 1 of them from the test. Right now I'm facing several issues in interpretation of the results.

1- I only have 24 cases for the test the other cases have missing variables is that enough for the test?

3- None of the variables in the equation are significant should I still interpret B and exp(B) and the results?

4- The constant is a high negative number is that an issue? because I think its messing with the probabilities 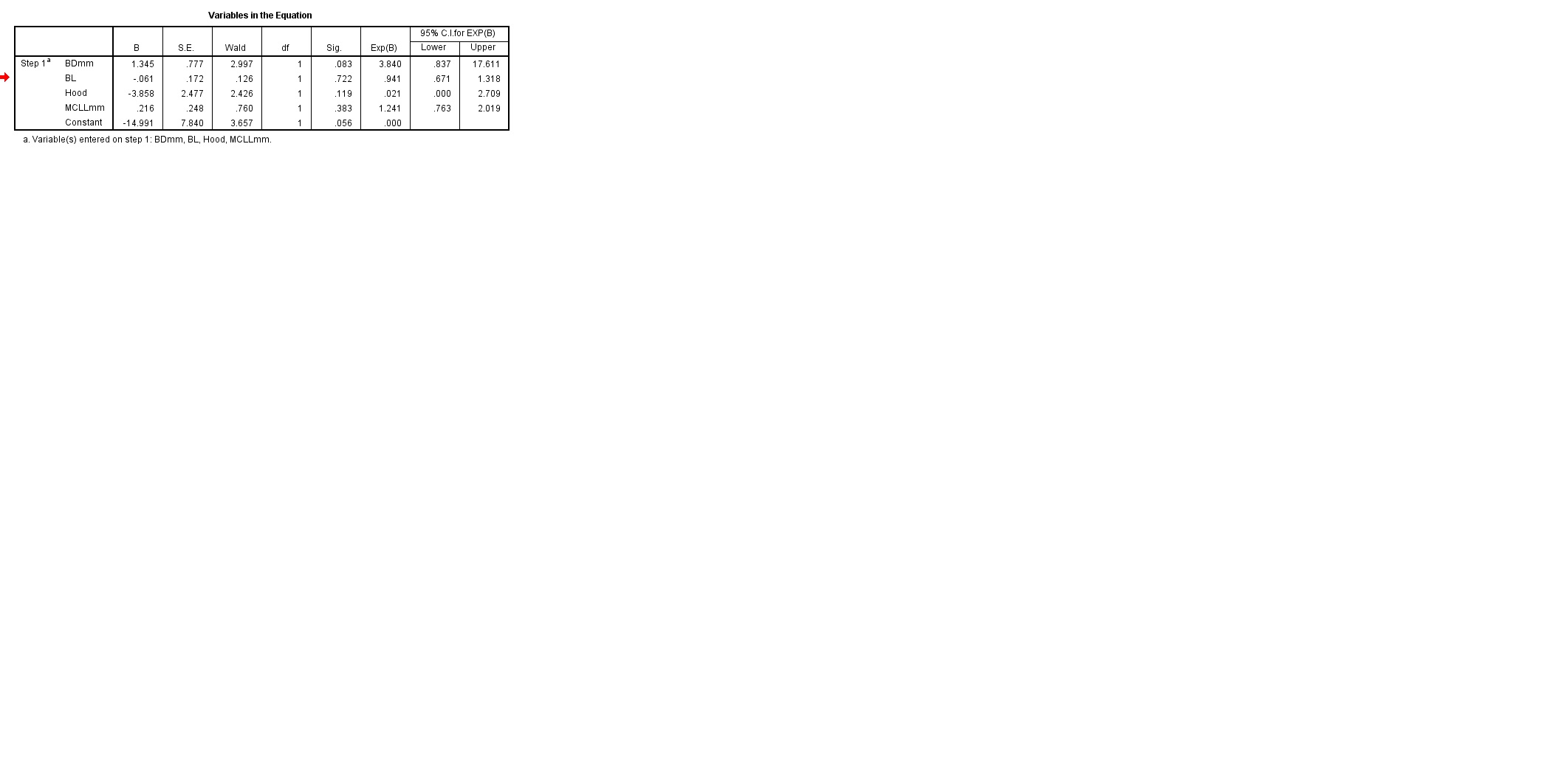 This study, unfortunately, is probably too small. With respect to your questions:

The way to proceed depends on your knowledge of the subject matter. If that knowledge suggests one or two predictors that would be expected to be related to outcome, then a smaller model more in keeping with the number of available cases would be appropriate. Note that, unlike linear regression, if an omitted predictor is associated with outcome you can still have omitted-variable bias in logistic regression even if the omitted predictor isn't correlated with the included predictors; see this page. On the other hand, if a predictor is not suspected to be related to outcome, then there is no need to include it; that would only reduce the number of degrees of freedom and reduce the power to detect a true relationship between predictors and outcome. So knowledge of the subject matter is central to deciding on the modeling approach.

You also could consider other ways to deal with the missing data to increase the sample size and the potential overfitting from a low case-to-predictor ratio. For example, missing data can be handled by multiple imputation. If you have a set of predictors that is highly correlated and essentially measuring the same underlying phenomenon, you could devise a measure incorporating all of their values into a single combined predictor. You might be able to include all predictors expected to be associated with outcome, without overfitting, if you use a penalization method like ridge regression or LASSO, although formal tests providing things like p-values with penalized approaches can require some care.

With respect to "None of the variables in the equation are significant should I still interpret B and exp(B) and the results?", I would interpret the result to imply, that to date in the analysis with respect to the proposed explanatory variables presented, a crab's mating decision largely remains still a random decision with a sample estimated probability.

If, in fact, many crabs perish prior to an opportunity to mate, the fact that a crab is a survivor could be a meaningful sole criterion.

Now, there may indeed be a predictor variable, but as of yet to be determined (perhaps a scent that is difficult to quantify).

Not the answer you're looking for? Browse other questions tagged regression logistic spss or ask your own question.