Are dependent variables necessarily functions of one another?

Do we necessarily have that a functional relationship exists between them?

I am assuming random variables are the usual real valued measurable functions, and if that helps one can assume every variable has a density and the conditional densities exist.

I am interested in potential transforms $f\colon\mathbb{R}^k\to\mathbb{R}$ which act on the realisations of one variable (say $X_2$) to (potentially nondeterministically) give the other (say $X_1$).

I am ruling out the cases of confounding and conditioning on colliders.

$Z$ should be interpreted as a disturbance term responsible for the non-deterministic nature of the mapping.

Further, I assume for now that a variable that has the same marginal distribution as $X_1$ and the same joint distribution with $X_2$ can be identified with $X_1$. The idea is "if it behaves the same, why make a distinction?".

This question is interesting because it concerns the general problem of regression in the sense of characterizing (or estimating based on data) the conditional distribution of one variable, $X_1,$ based on values of another variable $X_2.$ Their lack of statistical independence implies there is something to be gained from this.

We may take our cues from the theory of Generalized Linear Models (GLMs), which suppose the conditional distribution of $X_1$ is a member of a finitely parameterized family of distributions and the parameters depend first on a linear function of $X_2$ and, usually, by a nonlinear transformation of that result (aka the "link function"). In the present question no such parametric assumption is made. We should therefore work with the conditional distribution of $X_1$ directly.

This shows that the distribution function of the random variable $F^{-1}(Z)$ is $F.$

Suppose it is possible to find such a uniform $Z$ that is independent of $X_2.$ (One can always do this by enlarging the original probability space if necessary.) In this case the foregoing result holds for every possible value $x_2.$ Consequently, if we define the function $f:\mathbb{R}^2\to \mathbb{R}$ by

As the first example, consider the intriguing illustration presented in the reply by Dave at https://stats.stackexchange.com/a/443150/919/. It displays a $42$-element dataset consisting of a sequence of ordered pairs

as $i$ ranges from $-20$ to $20$ inclusive. (The value $(0,0)$ is included twice, even though that is not apparent from the scatterplot.) We may conceive of this in terms of its empirical distribution, which assigns the probability $1/42$ to each element of the dataset, thereby defining a bivariate random variable $(X_1,X_2).$

In this case we will need to define $F_{x_2}$ for each value $x_2$ that appears as a second coordinate in the dataset (it doesn't matter how we define $F_{x_2}$ elsewhere, because those values have no probability). With this in mind, compute

The claim is that

Rather than do a direct calculation, let's have the computer simulate the latter using R, to be compared to the scatterplot of $(X_1, X_2)$ in Dave's reply:

This scatterplot confirms it works correctly: 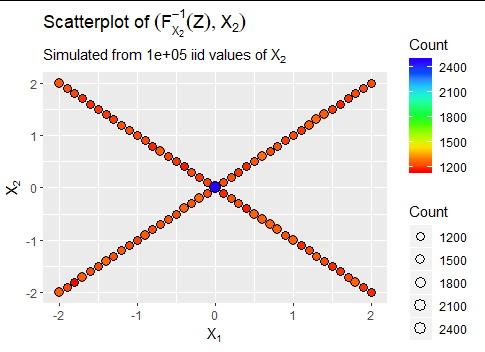 Another example suggested in comments is a uniform distribution on a circle: 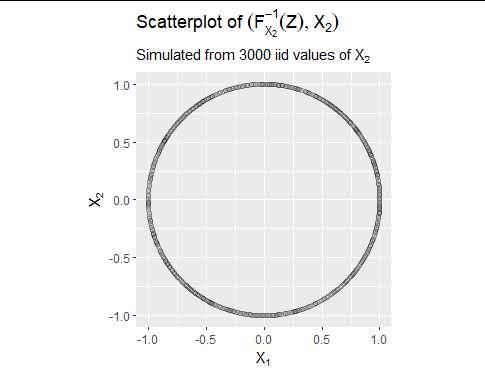 Finally, the more difficult situations occur when the scatterplot cannot be conceived of as exhibiting either of the $X_i$ as a function of the other, as in this uniform distribution on a square: 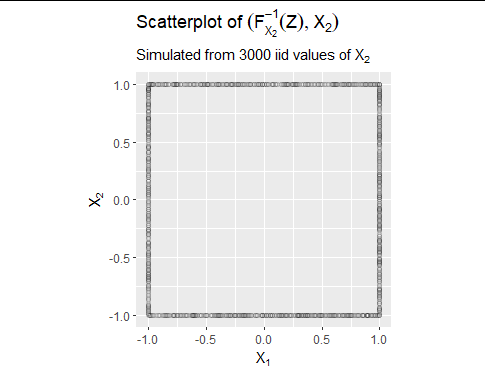 Here, the marginal distribution of $X_2$ is a mixture of a uniform distribution on the interval $[-1,1]$ and equal point masses at $\pm 1,$ which can be simulated via

I think this is a good place to use a picture. 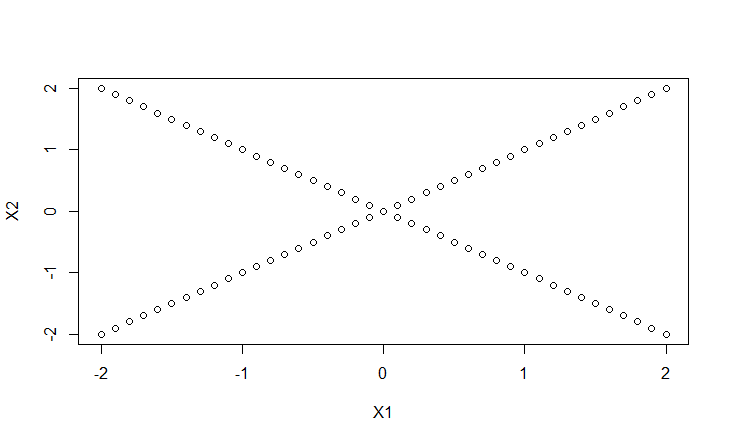 I think the lack of independence is evident. However, the relationship cannot be functional, as a large value of $X1$, say $X1=2$, results in either $X2=2$ or $X2=-2$, and there's the usual business about a function having a unique output for each input.

(I considered that we could call it functional if we see the output as the vector $[-2,2]$ or the set $\{-2,2\}$, but I don't think those work. The relationship is to select one of those values, not a vector of possible values or the entire set of possible values.)

Not the answer you're looking for? Browse other questions tagged function dependent-variable or ask your own question.

1
Family of functions ranging from zero to one with parameter influencing rate of approach to one
13
Can a neural network learn a functional, and its functional derivative?
9
How to understand the geometric intuition of the inner workings of neural networks?
11
Is there a way to recover a temporal dependence structure in a time series from a regression against time?
0
what type of analyses to use if one of the dependent variables is omitted when another dependent variable takes a certain value?