I have several questions about constructing error bars and using them as weights in the context of fitting, or indeed any kind of weighted statistic -- especially with regards to error and noise sources which are non-Gaussian.

Usually one might make a measurement, repeat it many times, and if the underlying source of error or noise on the measurement is Gaussian, then defining error bars and weights is relatively simple -- either some multiple of the standard deviation e.g. $\delta x = \pm \sigma$ encompasses $68\%$ of the data, OR a standard error like $\sigma/ \sqrt{n}$.

For example, I have constructed an arbitrary function and generated some random data with a Gaussian distribution: 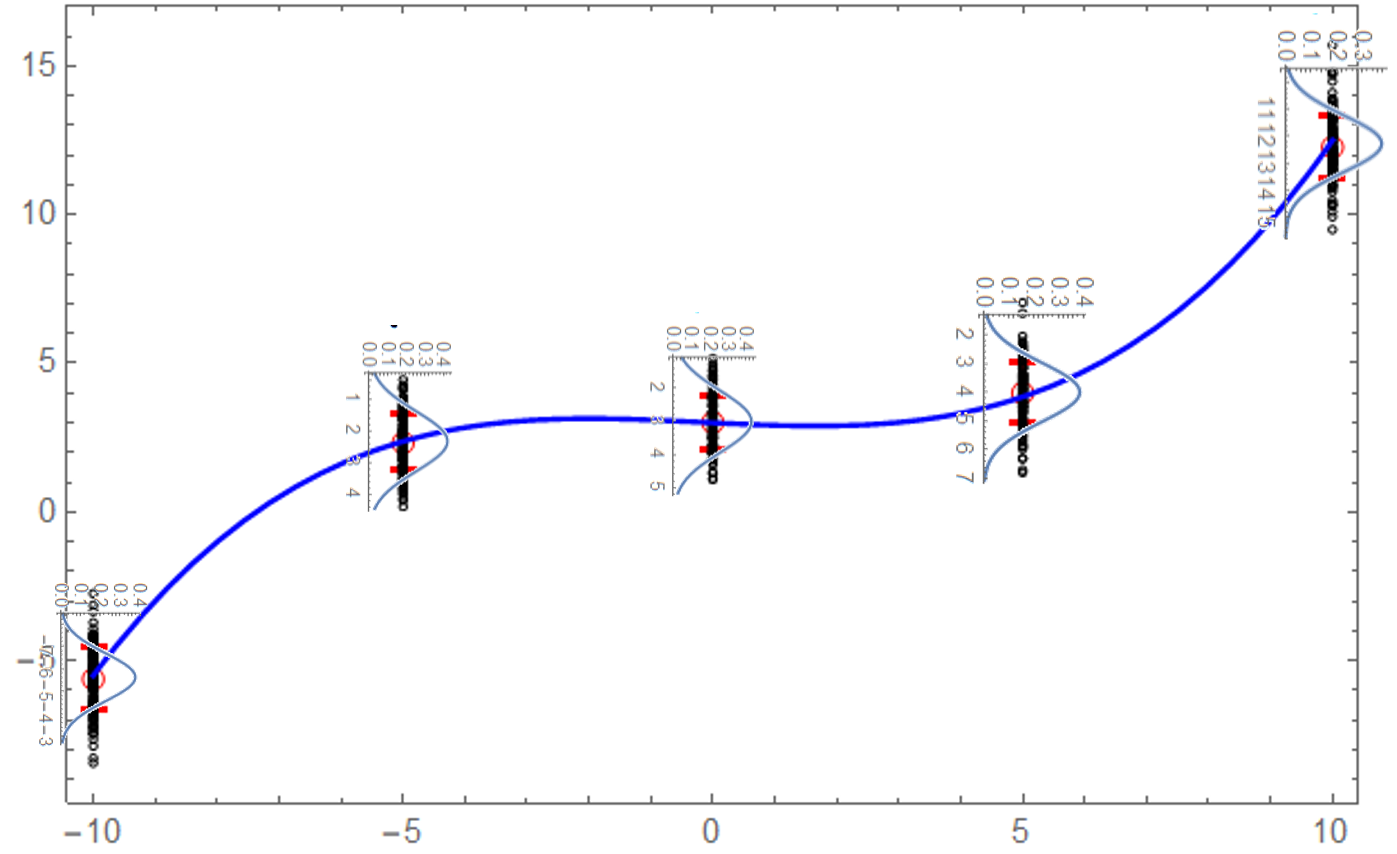 The red plot markers indicate the mean, and the error bar is simply one standard deviation. I have plotted the corresponding PDF for each set of data and mapped these distributions to the plot. This is how I visualise the error and distribution of data, and what the mean data points (red markers) "really look like". 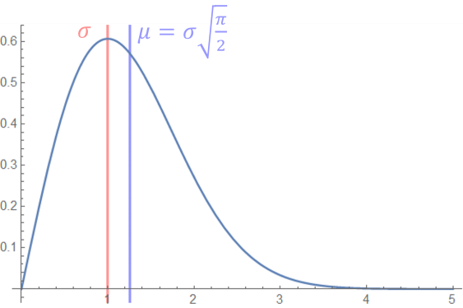 This to me is somewhat counter intuitive as for an asymmetric distribution I would expect an asymmetric standard deviation or error bar. If I repeat my example as above but this time using a Rayleigh distribution instead of a Gaussian: 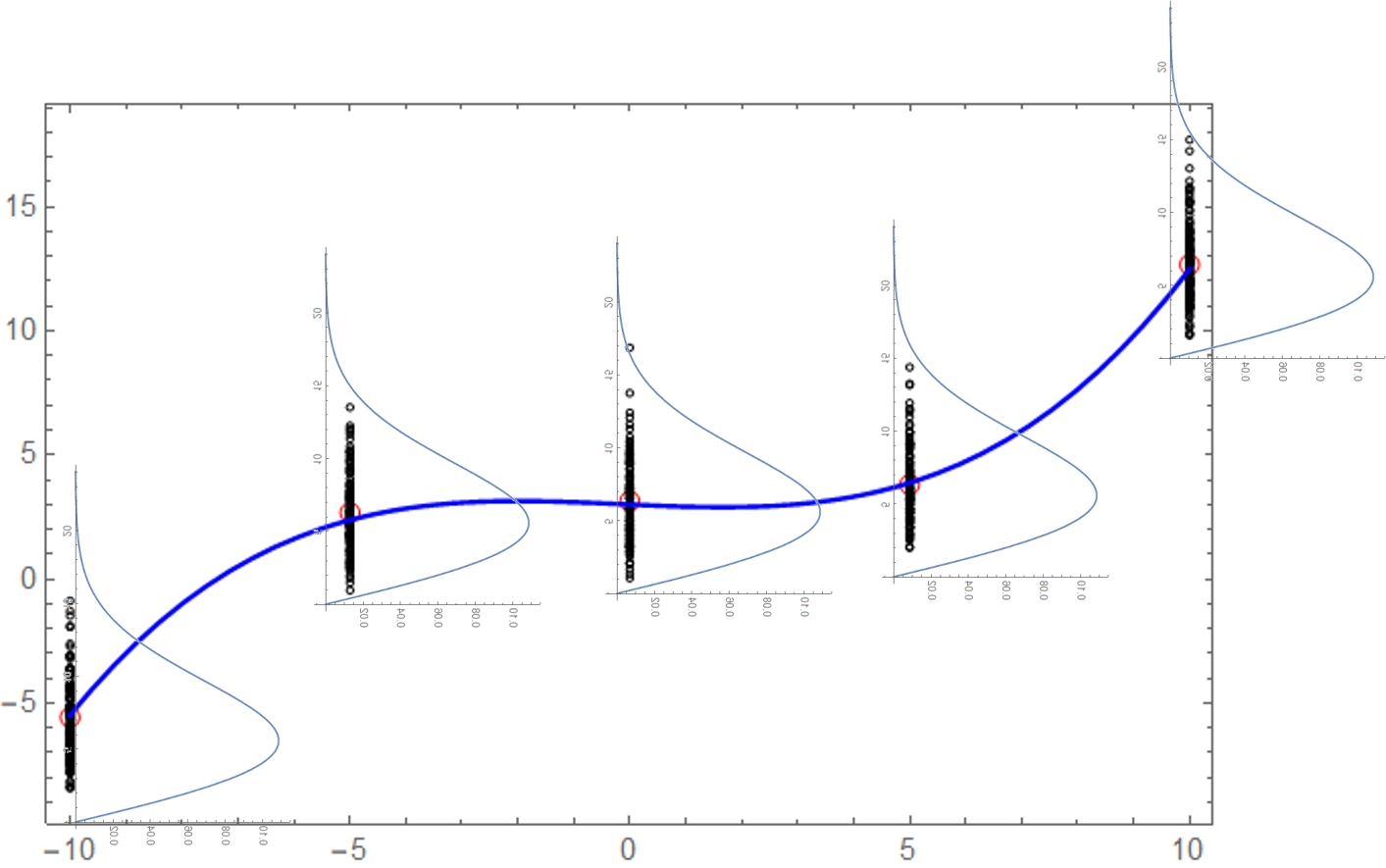 Third Question: Regardless of the answers to my first two questions, I would be curious to know how one would go about constructing a weight from an asymmetric error bar i.e. normally a weight is defined as $$W = 1/\sigma^{2}$$ where $\sigma$ can be the error or standard deviation in some quantity $x\pm \sigma$ where $\sigma$ could also be $\sigma = \delta x$ the error in some quantity. But what about if one has something like $$x^{+\delta x_{+}}_ {-\delta x_{-}}$$ where $\delta x_{-} < \delta x_{+}$. How would one construct a weight from this?

The "standard deviation" is defined mathematically, there is no other way to calculate it. It isn't meant to capture all the information about the shape of the distribution; no one numeric value could hope to do so except in the case of one-parameter distributions. Note that your expression for the variance:

does not specify the functional form of $f$; this means that the variance, and the standard deviation $\sigma$ (which is nothing more than $\sqrt{\sigma^2}$), are defined the same way regardless of $f$.

The standard deviation does reflect one aspect of the shape of the distribution, namely, how spread out it is, writing loosely. Even then, it doesn't capture all aspects of what might be referred to as "spread out", e.g., those captured by kurtosis. It does not reflect skewness - the standard deviation of a random variable $x$ is the same as that of $-x$, although the skewness has switched signs, for example. If you want asymmetric error bars, which is in many cases a good thing to want, you'll have to construct them using either your knowledge of the distribution's functional form or other techniques such as bootstrapping; as you have realized, you can't get there from the standard deviation alone.

However, in many cases the Central Limit Theorem plus enough data and some assumptions means that even with non-normal errors, confidence intervals for individual parameters, e.g., regression coefficients, are well-approximated by a Normal distribution, for which symmetric confidence intervals are appropriate (unless you have an unusual criterion for your interval.)

which generates the following plot: 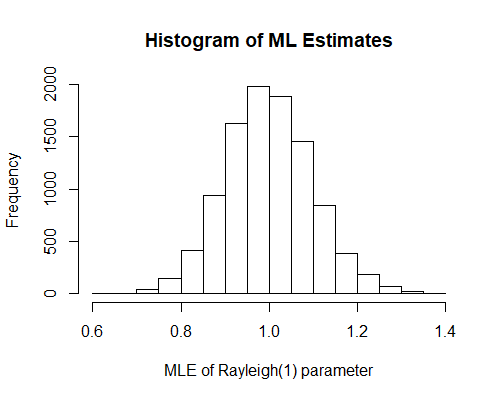 Not far from a Gaussian distribution, and further analysis (done at your leisure) will confirm this.

On the other hand, if you are trying to construct a predictive confidence interval, then you'd want to take the asymmetry of the Rayleigh distribution into account. There are lots of ways to do that; Bootstrap prediction interval, How to: Prediction intervals for linear regression via bootstrapping, and other questions may get you started on bootstrap methods. You can also generate pointwise confidence intervals for a curve, or for observations centered around a curve, as in your third plot above, through bootstrapping.

Here's a simple bootstrap for a predictive interval given a parameter estimate from 100 observations from a Rayleigh(1) distribution: 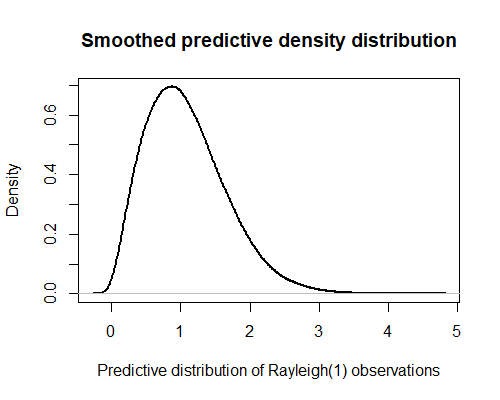 If you are using squared-error loss, then generating weights using the variance is appropriate regardless of considerations of skew. To see this intuitively, consider the fact that squared error itself doesn't take skew into account, so one might suspect that optimal weighting of observations from a squared error perspective wouldn't either. How to estimate those weights when you don't know them a priori is a bigger issue; see the second answer to How do you find weights for weighted least squares regression? for an example of a situation where an optimal weighting scheme isn't dependent upon a variance estimate at all!

Not the answer you're looking for? Browse other questions tagged distributions standard-deviation standard-error error or ask your own question.