How to isolate two distinct effects of a unique independent variable in multiple regression analysis?

First of all thank you if you're reading this post and I wish you all the best for 2020!

Edit 1: All variables are continuous variables (no dummy or categorical)

Edit 2: An illustration of the problem has been added at the end of the post

My question can be illustrated with a simple regression as follow :

Assume that the effect of variable $A_t$ on $Y_t$ have two (and only two) specific channels, meaning that $A_t$ have two distinct effects (let's call them $e_1$ and $e_2$ for the sake of simplicity) on $Y_t$.

Now assume we can characterize one of the channel using another variable, say $B_{t}$. This variable $B_t$ allows us to control for the effect $e_1$, but also capture other effects. Including it in Equation (1), we obtain :

My intuition is that:

Would integrating an interaction term of $A$ and $B$ be a way to capture $e_1$ (as follow)?

Any help would be much appreciated. I hope the problem is clear enough, don't hesitate to ask if you need further information/specification. Thank you :) 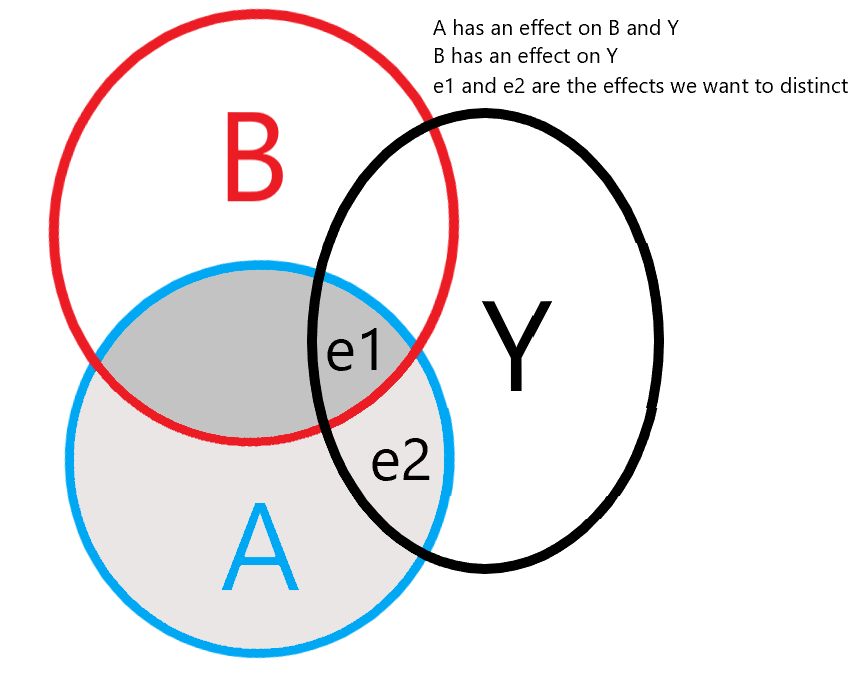 Multiple regression model always capture effect et ceteris paribus for each variable, meaning when every other variables are held constant. I think this property is enough to justify my first intuition, that is:

Thus, adding an interaction term, see equation $(3)$, would rather leads :

I can argue without the measure of $e_1$, but I'm still very curious if there is a way to measure it?

Since we know the value of ($e_1$ + $e_2$) and the value of $e_2$ only, I guess there is some sort of method, maybe I've learned it before but can't remember. Any help would be welcome please.

Not the answer you're looking for? Browse other questions tagged regression multiple-regression interaction or ask your own question.