I gave an educational intervention to Spanish speaking and English speaking students. I gave a pre and post test to these students. Due to certain issues I was not able to identify students with their scores. Below is my descriptive data. Each test had 16 questions possible. E.g., median score for Spanish speakers pre was 8 questions correct. 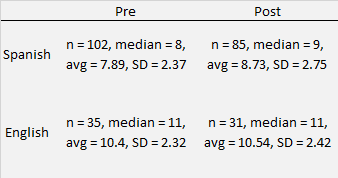 I would like to use a Two-Factor Analysis of Variance for Independent Measures. But don't know if my sample size differences make this improper!!??

Browse other questions tagged anova variance change-scores or ask your own question.