How to generate random integers between 1 and 4 that have a specific mean?

If I draw random uniform numbers between 1 and 5 and get floor, I have a mean of 2.5.

I agree with X'ian that the problem is under-specified. However, there is an elegant, scalable, efficient, effective, and versatile solution worth considering.

Because the product of the sample mean and sample size equals the sample sum, the problem concerns generating a random sample of $n$ values in the set $\{1,2,\ldots, k\}$ that sum to $s$ (assuming $n \le s \le kn,$ of course).

To explain the proposed solution and, I hope, justify the claim of elegance, I offer a graphical interpretation of this sampling scheme. Lay out a grid of $k$ rows and $n$ columns. Select every cell in the first row. Randomly (and uniformly) select $s-n$ of the remaining cells in rows $2$ through $k.$ The value of observation $i$ in the sample is the number of cells selected in column $i:$

To demonstrate scalability and efficiency, here is an R command to generate a sample according to this scheme. The question concerns the case $k=4, n=100$ and $s$ is $n$ times the desired average of the sample:

Why can this be considered effective? One reason is that the distributional properties of this sampling scheme are straightforward to work out:

These probabilities $\pi_i$ and $\pi_{ij}$ enable one to apply the Horvitz-Thompson estimator to this probability sampling design as well as to compute the first two moments of the distributions of various statistics.

Finally, this solution is versatile insofar as it permits simple, readily-analyzable variations to control the sampling distribution. For instance, you could select cells on the grid with specified but unequal probabilities in each row, or with an urn-like model to modify the probabilities as sampling proceeds, thereby controlling the frequencies of the column counts.

For instance, here is a crude R rendering: 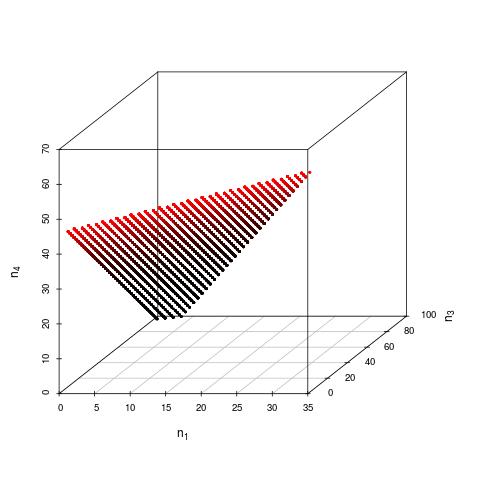 In case you want draws of the integers themselves,

is a quick & dirty way to produce a sample.

I want to ... uh ... "attenuate" @whuber's amazing answer, which @TomZinger says is too difficult to follow. By that I mean I want to re-describe it in terms that I think Tom Zinger will understand, because it's clearly the best answer here. And as Tom gradually uses the method and finds that he needs, say, to know the distribution of the samples rather than just their mean, whuber's answer will be just what he's looking for.

In short: there are no original ideas here, only a simpler explanation.

Now let's think about the numbers $0$ through $3$. I'm going to think of those as "how many items do I have in a 'small' set?" I might have no items, one item, two items, or three items. So the list

represents ten different small sets. The first is empty; the second has three items, and so on. The total number of items in all the sets is the sum of the ten numbers, i.e., $16$. And the average number of items in each set is this total, divided by $10$, hence $1.6$.

where the list above indicates that I selected the numbers 3, 9, 13, 14, and then many others that I haven't shown because I got sick of typing. :) I can take this sequence of 300 dots and Xs and break it into three groups of 100 dots each, which I arrange one atop the other, getting something that looks like this:

but goes on for a full 100 items in each row. The number of Xs in each row might differ -- there might be 35 in the first row, 24 in the second, and 31 in the third, for instance, and that's OK. [Thanks to whuber for pointing out that I had this wrong in a first draft!]

Now look at each column: each column can be considered as a set, and that set has between 0 and 3 "X"s in it. I can write the tallies below the rows to get something like this:

So here are the steps to getting 100 integers between 1 and 4 whose average is exactly $s$.

And then whuber tells you how to use it: you write

Let's work from the inside out, and let's simplify to $n = 10$ so that I can show sample outputs:

As you'll recall, we want to produce three rows of ten dots-and-Xs each, something like

Well, whubers code produces exactly that list of locations with its innermost section.

Here is a simple algorithm: Create $n-1$ random integers in the range $[1,4]$ and calculate the $n^{th}$ integer for the mean to be equal to the specified value. If that number is smaller than $1$ or larger than $4$, then one by one distribute the surplus/lacking onto other integers, e.g. if the integer is $5$, we have $1$ surplus; and we may add this to the next integer if it's not $4$, else add to the next etc. Then, shuffle the entire array.

As a supplement to whuber's answer, I've written a script in Python which goes through each step of the sampling scheme. Note that this is meant for illustrative purposes and is not necessarily performant.

I've turned whuber's answer into an r function. I hope it helps someone.

It seems to work as expected:

It can return 0s, which matches my needs.

Not the answer you're looking for? Browse other questions tagged r probability distributions random-generation or ask your own question.